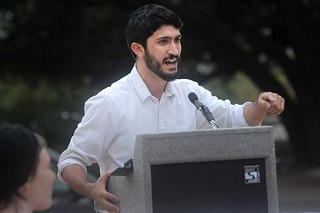 Council Member Greg Casar, pictured at a Fight for $15 rally in November, achieved a long-fought victory this week with the passage of his Fair Chance Hiring resolution. (photo by John Anderson)

On Thursday, March 24, Austin became the first city in the South to pass a Fair Chance Hiring ordinance requiring private employers to delay asking about a job applicant’s criminal history until a conditional offer of employment has been made.

The move came at the end of a meeting that saw several labor protections enacted, including a resolution to strengthen nondiscrimination protections for city employees, an extension of the city’s living wage requirement of $13.03 to construction workers on city-funded projects, and an extension of that same wage requirement to employees of subcontractors on city-funded projects.

Public testimony regarding the Fair Chance resolution featured several emotional accounts from proponents, most of whom had been directly affected by criminal history-related job discrimination. Lauren Johnson, a longtime advocate for the ordinance, spoke about having spent the first year of her son’s life in prison, and said that it’s important that her three children “always have hope to be more than their worst choice.” Kandace Vallejo, executive director of Youth Rise Texas, an organization that works with teenagers who have been directly affected by parental incarceration, showed a video of Youth Rise intern Destiny Harris, a high school senior who was unable to attend the meeting because she had to work to support her family, as her mother’s criminal record makes it difficult for her to find employment. Harris said that the ordinance would give “people like me and my mom a second chance.”

Opponents of the ordinance appeared to be most concerned about how it would affect staffing agencies and companies with policies barring people with criminal records from certain types of employment. Vice President of Meador Staffing Services Pamela Bratton reiterated her concerns about how the ordinance would affect her ability to quickly place applicants. Council Member Ann Kitchen suggested that the portion of the ordinance dealing with staffing pools clarify that the conditional offer requirement means that the background check is run once an applicant has been given the offer to be placed in the pool of staffers, not when they’ve been assigned a job with another company. However, Bratton said that she would not be able to support the ordinance without running the change by her legal team.

Suzanne Yashewski of the Cornerstone Credit Union League said that credit unions were concerned that even though the ordinance would not apply to “a job for which a federal, state, or local law, or compliance with legally mandated insurance or bond requirement disqualifies an individual based on criminal history,” they might still have to spend time defending themselves against meritless complaints. Mayor Steve Adler said that it was not the intent of the ordinance to allow meritless complaints to be processed. (It should also be noted that the ordinance requires that businesses receive a warning before being hit with any penalty for noncompliance). Yashewski said that it would be better if the ordinance simply excepted financial institutions altogether. However, resolution sponsor Council Member Greg Casar said that he could not agree to that request, because it would affect positions at the institutions that could potentially be staffed by people with criminal records.

Another source of opposition dealt with Casar’s insistence that the question occur no earlier than the conditional offer. Roberta Schwartz of Goodwill Industries said that while the organization itself is a Fair Chance employer, they believe that the question is more appropriately asked at an initial job interview, and that waiting until the conditional offer would be too costly to employers and “devastating” to applicants rejected at the end of the process.

At the heart of the push for the ordinance was the belief that people with criminal records are being discriminated against unfairly. Travis County Democratic Party Chair Vincent Harding said that the current practice of inquiring about criminal history on initial job applications was dooming people to live “a lifetime sentence of second-class citizenship,” while Lewis Conway, who spent eight years in prison and 12 years on parole, said that “it’s like I’ve paid back the loan but I’m still paying interest.”

After public testimony concluded, Council Member Pio Renteria spoke of his own family’s experience with the criminal justice system. He said that his older brother, who was released from prison at 32 after spending most of his youth behind bars, is now 68, and has never made more than $10/hour. He said that two other of his brothers had also been in prison, and had never recovered from the experience. Renteria’s son, who went to jail when he was younger, has gone on to become the manager of a grocery store. “That’s what a second chance does for you,” Renteria said.

After Council Member Ora Houston requested and received a change in the penalty portion of the ordinance (the penalty is now a fine of “up to $500,” rather than just “$500,” Council voted to pass the ordinance, with CMs Don Zimmerman and Ellen Troxclair voting against, and CM Sheri Gallo absent.

Supporters of the measure were jubilant, some crying with relief. “It’s a really special moment,” Casar said. Although he is aware that the ordinance may face pushback from the Legislature, which typically is resistant to municipalities enacting policies with which it disagrees, Casar said that no matter what happens, “I know we’re on the right side of this.”