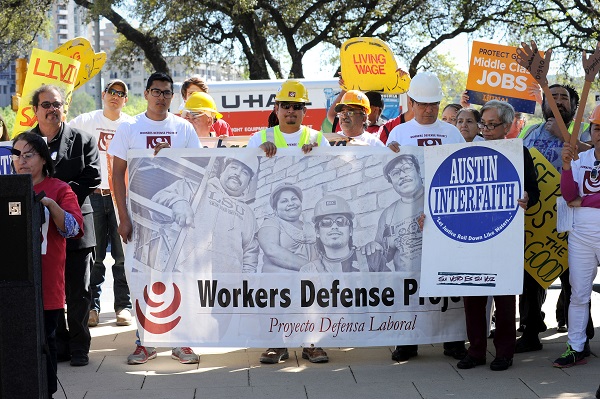 During last year’s budget deliberations, Council voted to increase the minimum wage paid to city employees from $11.39 to $13.03/hour. Although employees of city contractors were covered by the decision, subcontractors on city-funded projects were still able to pay their employees less than $13.03.

The resolutions closing the loopholes had both been initiated by Council Member Greg Casar’s office, who said they were of a piece with his Fair Chance Hiring resolution, which he had proposed last May at the same time as the living wage extensions.

On Thursday afternoon, immediately before Council took up the two items, several labor advocates spoke in favor of them during a press conference. Workers Defense Project Executive Director Jose Garza said that it was “unconscionable” that construction workers should not be protected by the city’s living wage policy, and that the city should use tax dollars to benefit working families.

Both of the measures passed easily through Council. As one would expect, Council Members Don Zimmerman and Ellen Troxclair voted against both (CM Sheri Gallo was absent), but the rest of Council offered no objections.

A less decisive victory was won by Workers Defense on Monday, March 21, when the Capital Metro Board voted 7-0 to approve the Master Development Agreement for the Plaza Saltillo project. Endeavor Real Estate Group was selected in 2013 to build a mixed-use development on the 10-acre Downtown East Austin tract of land. In the time since, WDP has lobbied for increased protections for the workers who will construct the project. While Endeavor conceded to raising the wage floor to $13.03 during the final hours of negotiations (some of the difference in cost will be picked up by Capital Metro), other demands WDP had made, including an independent on-site safety monitor, were not met.

The project requires variances that must be approved by Council, so expect the debate to come to City Hall soon.