We thought we recognized that name ...

Like many alt-weeklies, the Chronicle doesn’t believe in censoring its advertisers. 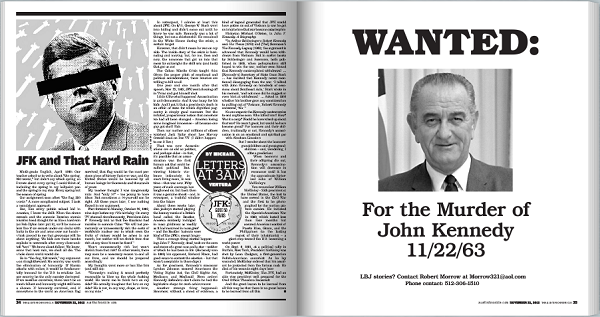 The Nov. 22, 2013 issue of the Chronicle (Courtesy of The Austin Chronicle)

If your copy is covered by the First Amendment, and you’ve got the money, we’ll run your ad. This has resulted in more than a few ads published in our paper that contain content that might be described as ranging from “NSFW” to “batshit crazy” to “unbelievably offensive.” What can we say, other than we support your right to say things that sometimes raise our blood pressure?

When it was announced Tuesday night that the lunatic wing of the GOP had succeeding in electing one of their own, Robert Morrow, as chair of the Travis County Republican Party, many local news outlets surely recognized his name from the various missives they’ve received from Morrow detailing political conspiracy theories – LBJ murdered JFK, Rick Perry is a closeted homosexual who has sex with male prostitutes, Bill Clinton has an illegitimate black son etc. ad nauseam. In addition to the emails we’ve received, the Chronicle has, over the years, run a few of the ads he’s created to bring attention to his causes. Below, we’ve compiled them to add to the rapidly expanding record of Morrow’s exploits.

It must be noted that, despite the fun we and other members of the media are having covering such a colorful, quotable hatemonger, Morrow, like others of his ilk, including Donald Trump, has shown that he has the support of voters, and that makes him worth taking seriously. The fact that Travis County Republicans have decided this is who best represents them is no joke. 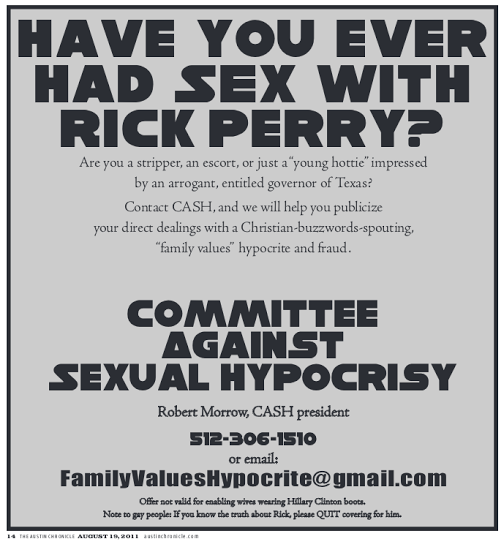 Published in the Aug. 12 and Aug. 19, 2011 editions of the Chronicle (Courtesy of The Austin Chronicle) Published in the Nov. 6, 2015 edition of the Chronicle (Courtesy of The Austin Chronicle)