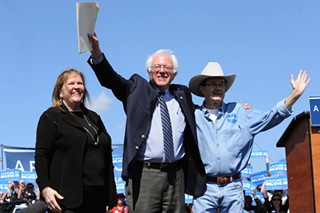 Jane O'Meara Sanders, Bernie Sanders with activist and former agricultural commissioner Jim Hightower at a Bernie Sanders Rally at the Circuit of the Americas on February 27, 2016 (photo by John Anderson)

In this week's news roundup: The attorney of a former APD officer accused of murder files a motion to dismiss charges because key testimonies were not recorded; the implementation of campus carry at UT Austin convinces some to leave the university, and presidential hopeful Bernie Sanders holds a last-minute rally with thousands attending.

• Off the Record: The attorney for VonTrey Clark, the former APD officer accused of killing Samantha Dean, filed a motion Wednesday suggesting the case against Clark be dismissed because no court reporter was present when Brent Barina and Russell Abel, the two Texas Rangers investigating Dean's murder, issued their testimonies to the grand jury in Bastrop County. Bristol Myers, Clark's attorney, expressed concern in the four-page motion that the lack of any record from Barina and Abel's testimonies could mean that the testimonies they give during Clark’s trial could be inconsistent with their earlier recollections – and nobody would know. Clark, charged with capital murder for the plotted killing of Dean, a pregnant, 29-year-old crime-victims counselor with the Kyle Police Department, last February, has been in custody since early September, when authorities found him hiding out in Jakarta, Indonesia. He's due in court for another pre-trial hearing on March 9. – Chase Hoffberger

• Gun Law Hits UT Hiring: Fears that campus carry would affect Texas' public universities' ability to attract and retain staff are being substantiated. On Feb. 27, UT Austin President Gregory Fenves submitted to UT System Regent William McRaven his plan to implement rules enabling students to bring concealed firearms into classrooms, as passed into law as Senate Bill 11 last session (see Campus Carry: Everybody's Unhappy, Feb. 25). Both McRaven and Fenves have come out publicly against campus carry as antithetical to university life, but said their hands were tied on implementing the law. In response, dean of the School of Architecture Frederick Steiner quit over the new law, and told Fox News he will return to the University of Pennsylvania, where he previously lectured. Now University of Virginia professor of Media Studies Sida Vaidhyanathan tells the Austin American-Statesman that he is withdrawing his application to become new dean of the Moody College of Communication. Vaidhyanathan was contacted by recruiters last fall, and was one of the finalists, but said he did not want the post because the presence of guns in classrooms would have "a chilling effect" on normal academic discussion. – Richard Whittaker.

• Yes We Can?: Presidential hopeful and Democratic Socialist Bernie Sanders drew a crowd of thousands early Saturday morning in a last-minute rally held at the Circuit of the Americas. (For photos of the event, see "Bernie Does COTA.") Confirmation that Sanders would make a visit was only given by campaign staffers the night before, so the massive turnout speaks to the enthusiasm of his supporters. The rest of Texas may be a tougher sell. A new UT Austin/Texas Tribune poll shows front-runner Hillary Clinton at a substantial, but narrowing, lead with 54% to Sanders' 44%. Breaking those numbers down, Clinton leads Sanders 70 to 27% among black voters, and 60 to 37% among Hispanic voters. Sanders has a dramatic advantage with young people, with 62% of likely voters between 18-29 years old supporting him. However, this is the only age group Sanders can claim. Texas voted for Clinton against Obama in 2008, and there's little reason to doubt another Clinton victory in 2016, but Sanders remains hopeful.

"We started off fifty, sixty points down in the polls," Sanders said in an interview with KVUE. "Did anybody in Texas know who I was nine months ago? We have come a very long way. I think we got a shot to win it."

The campaign's choice to hold the rally at the Circuit of the Americas is interesting considering the track's history as a token symbol of corporate welfare. The state was giving the F1 race $25 million in subsidies per year until Gov. Greg Abbott cut that amount by about $5 million. – Waylon Cunningham