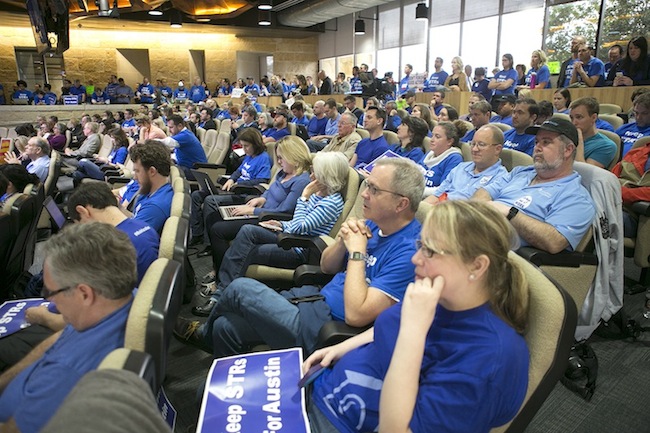 STR 2s may be on the verge of extinction here in Austin.

During Tuesday’s work session, Council voted 9-2 to approve a set of regulations for Type 2 short-term rentals (STRs), non-owner occupied rental homes, after lengthy debate. District 8’s Ellen Troxclair and District 6’s Don Zimmerman voted against the long-awaited measure, which most notably, phases out Type 2 units in residential areas by April 1, 2022. In December, Council placed a temporary moratorium on new Type 2s until Spring 2017 – but the new ordinance imposes a more permanent stranglehold. There are more than 400 Type 2 STRs in Austin, rented out for no more than 30 days at a time.

It’s unusual for Council to take action during work session, but they apparently decided they couldn’t kick the STR can down the road any longer, especially considering the countless hours the debate has already devoured, beginning with the previous Council. But it’s extremely likely this will not be the last word on the subject.

The ordinance also enacts a number of restrictions including an occupancy limit, to go into effect in 10 days, that says no more than 10 adults or six unrelated adults can stay in a property. It requires a license to advertise a property and slaps owners with a fee if they submit an application when they’re operating without a license. It enforces mandatory inspections every three years for a license renewal and limits outside gatherings (i.e. parties) to 7am to 10pm with only six adults allowed to participate. Separate amendments passed, including limits on sound between 10pm – 10am (District 10’s Sheri Gallo) and removing a guest registry requirement (Troxclair). District 5’s Ann Kitchen offered up an unsuccessful amendment to move the phase-out to 2027, saying she supports a full ban but wanted to give more time to the good actors.

More than 100 STR Type 2 advocates, mobilized by HomeAway, marched from their offices to City Hall, where they flooded Council chambers, wearing blue shirts and holding signs that read, “Keep STRs in Austin.” (The logic of the signs and shirts compelled District 7’s Leslie Pool to assure the audience no matter what action is taken by Council there will still be STRs in Austin – just not Type 2s. “We’re expressing a preference for having the owner live on the property for many reasons,” she said.) The sizable show comes after the local vacation rental company HomeAway announced its self-policing initiative, “Stay Neighborly.” Meant to crack down on bad STR actors and alleviate concerns from anti-Type 2 advocates, the pilot program offers a complaint hotline and a zero tolerance policy for disruptive renters. Lynn Atchison, CFO of HomeAway, says Council is unfairly punishing the vast majority of owners just because of a few bad actors. “We’re disappointed with this onerous level of regulation,” she said following the initial vote.

The STR opponents who won the day charge that too often, Type 2 STR’s have become “party houses” for tourists, bring nuisance and sound disturbance to community residents, and encroach upon the fabric of the neighborhood. Moreover – at the core of the problem for many – as Austin’s housing market faces a crisis the residential units occupied by vacationers suck up available housing stock for local residents struggling with affordability and generally drive up housing costs.

Hoping to strike a balance (the name of his game in general), Mayor Steve Adler proposed an amendment – met with hearty applause from pro-STR 2 advocates – that sought to prevent, or at least delay, the phase-out. While admitting he wasn’t “completely sure” if Type 2 STRs truly belong in the middle of neighborhoods, Adler lightly praised code enforcement in going after bad actors, and said the city is better off regulating them (at least at this point) rather than permanently banning their use. Doing so could spark an underground market and invite lawsuits, he warned. Alder also reminded of the tools currently in place: For one, that only 3% of available housing stock per census tract (a small chunk or a substantial portion of much needed housing – depending on whom you ask) is allowed to be used as vacation rentals and rules to limit the clustering of these properties.

As a dogged critic of Type 2 STRs, District 9’s Kathie Tovo reiterated her adamant opposition, calling the “mini-hotels” a “failed experiment” allowed by a previous Council. Type 2s, she and others argue, aggravate the already beleaguered housing market and are part of the reason children and their families are forced away from Austin schools and out of their communities. “[STR 2s] are a bad decision, but we have an opportunity now to make the right one. … I don’t believe commercial STRs are in best interest of our schools and our residents,” said Tovo, who supports a full ban on Type 2s, except in districts zoned commercial. Adler’s amendment to hold off on the phase-out until the current moratorium is completed and reviewed was supported by Gallo, Kitchen, Troxclair, and Zimmerman – and was thus defeated, 6-5.

The end of Type 2 STR’s? Perhaps for now – but it’s a good bet that Tuesday’s meeting was only the beginning of the next long-term, and contentious debate.