Government may or may not be a farce 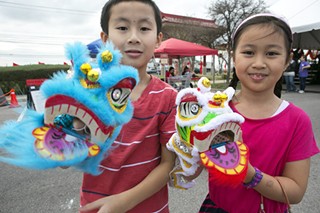 In this week's news roundup: a Texas health official steps down after criticisms for a study that suggests defunding Planned Parenthood might be, surprisingly, bad for family planning; a Grand Jury declines to indict two officers involved in a shooting; several early voting polls have scheduling problems, but hardly anyone is voting anyway; and more ...

• When the Truth Hurts: After facing criticism for co-authoring a study suggesting state cuts to Planned Parenthood resulted in barriers to contraceptive access and a rise in births, a Texas health official is now stepping down from his post. Rick Allgeyer, the Texas Health and Human Services Commission's director of research, helped members of the UT-Austin based Texas Policy Evaluation Project with a report published in the highly regarded New England Journal of Medicine showing that following the removal of the reproductive health provider from the Women's Health Program, there were 35% fewer claims for long-acting, reversible contraceptives and a 27% increase in Medicaid births among some contraceptive users. Allgeyer was facing disciplinary charges from HHSC for spending work hours conducting research, according to the AP. Heat on the agency started with an open letter to the state health commissioner sent earlier this month by Sen. Jane Nelson, R-Flower Mound, who called the peer-reviewed study misleading and said it fails to present an accurate picture; she requested the agency conduct a review of the findings. She also chastised the study for being funded in part by the Susan T. Buffet Foundation, "a major supporter of Planned Parenthood." Take Nelson's criticism with a large grain of salt: The openly anti-choice senator (who's got a record of spinning numbers associated with women's health) supported booting Planned Parenthood out of the Women's Health Program back in 2012 and voted in favor of massive cuts in 2011, which ended up hurting dozens of family planning clinics. And as finance chair last session, she led changes in the state budget to exclude the provider from a life-saving breast and cervical cancer program for low-income women, a punishment for being affiliated with abortion services. – Mary Tuma

• Non-indictment: A Travis County Grand Jury declined to issue indictments to two APD officers, Jessica Martinez and Troy Wiser, for the May 24, 2015 shooting of Delbert Lee Allen in Northeast Austin. Martinez and Wiser were dispatched to the Walnut Creek Apartments on Springdale Road shortly after 1am that Sunday morning after learning that the 29-year-old Allen was causing a disturbance inside the complex. (Witnesses said that he was high on PCP.) The officers opened fire after one saw what was believed to have been a pistol in Allen's waistband. A .41 caliber handgun was found "on or about" Allen's person shortly after he was shot. He was transported to a hospital and recovered from his injuries. Allen was charged with unlawful possession of a firearm by a felon (he has been convicted of eight felonies since Feb. 2008). His criminal case is still pending. A release from the District Attorney's office reports that the grand jury spent six hours reviewing evidence and heard from six witnesses. – Chase Hoffberger

• yuhhh: Odd Future founder Tyler, the Creator accepted a plea agreement with the Travis County District Attorney's office last week, thereby all-but closing the book on his March 2014 arrest for inciting a riot at SXSW. The original charge, brought on by the rapper's insistence that fans kept outside a day party at the Scoot Inn "push through" the gates and fencing to get inside the show, originally carried a penalty of a Class A misdemeanor (max. one year in jail and a fine of up to $4,000), but the Statesman reported on Wednesday that Tyler (real name Tyler Okonma) instead pled guilty to disorderly conduct and paid a $100 fine. The case will be dismissed entirely if he can avoid any run-ins over the next three months. – C.H

• What Presidential Bump? The highly contested presidential races seem to be having only a marginal impact on turnout around Austin in the March 1 primary, with only 4.23% turnout in the first five days of voting (Feb. 16-20). In that period, 18,850 Travis County residents (2.93% of all registered voters) cast their ballot in the Democratic primary, versus only 8,339 (1.3%) in the Republican primary. With total early turnout only at 27,189, and only six days of early voting left, it seems highly unlikely that turnout will reach the current EV record of 115,316, set the last time there was an empty White House, back in 2008. – Richard Whittaker

• Thanks, Obama: Eyes rolled around Austin when it was announced on Friday that President Barack Obama will attend a fundraiser here on March 11 – the first day of SXSW Interactive and Film. The geniuses at the Democratic National Committee have organized a "reception" in Austin, with tickets starting as $250 per person for general admission, and $33,400 for a couple to co-host. The issue isn't that the president will be in town (although it does re-enforce the sneaking suspicion among many local Dems that the DNC only comes calling when they need some cash). The issue is the timing: the first day of SXSW is one of the busiest of the year at the already over-crowded Austin Bergstrom International Airport without the distraction of Air Force 1. Then there's the question of policing levels. As for anyone that has driven during the festival or during the road closures required for a presidential visit, the fear is of a traffic meltdown. – R.W.

• Short-Term Fuses: Tomorrow's City Council work session (Tuesday, 9am, City Hall) promises more than the usual general discussion of selected items: posted for action is a draft ordinance featuring long-awaited revised regulations on short-term rentals. The draft proposal addresses additional enforcement matters concerning code violations in short-term rental units, and also proposes a phase-out, over several years, of all "Type 2" (non-owner occupied) STR's in residential neighborhoods. On Friday, Mayor Steve Adler posted on the Council message board that he will propose removing the phase-out ("amortization") of Type 2 STR's, holding off on any such action until after the current moratorium period. The mayor wrote that Council should allow current enforcement upgrades on problem STR's to take full effect, and not encourage the creation of an underground market in Type 2 rentals. Mayor Pro Tem Kathie Tovo told the Statesman that she hopes to hold the ground on moving Type 2 STR's out of residential zoning and into commercial areas only. (Tuesday's meeting may devour much of the day; the agenda also features three briefings and four executive session items … ) – Michael King

• Not Early Enough: Somebody bungled the scheduling on five poll locations for early voting for the March 1 primary, and Travis County Commissioners Court was scrambling a rare Sunday afternoon meeting yesterday to extend hours at five polling locations: Howson Public Library, Austin Area Urban League, Dan Ruiz Public Library, Carver Branch Library, and the Parque Zaragoza Recreation Center. City and county officials were scrambling (and finger-pointing) to determine how the hours at those polls deviated from the standard 7am to 7pm to 10am to 5pm or less – "miscommunication' was the general conclusion. It didn't help that all but Howson (on Exposition Boulevard) were Eastside locations, raising suspicions of discrimination against minority voters. Moreover, state open meetings laws require 72-hour public meeting notice followed by 72-hour action notice for Commissioners Court to fix the problem. The Court met Sunday afternoon and voted to correct the mistake – meaning the hope is that by the final three days of Evote (Wednesday through Friday), those polls will finally have extended hours. – M.K.

• Shaggy Goose Story: This morning (Monday, Feb. 22, 11am), mourners and celebrants will be gathering at Martinez Brothers (Funeral Home) Taxidermy, 2057 S. Lamar Blvd., in honor of the late Homer the Homeless Goose. Homer flew to his immortal home in March of 2015, but his survivors – advocates of local homeless people, for whom Homer had become a mascot of many years – are raising money "to buy a protective display case, rolling trailer customized to look like his Raft when he lived on Lady Bird Lake with his homeless friends' flotilla, and presentation display boards for his Road Show." The fundraiser will be Tuesday, 4-8pm, at 2415 East Fifth Street. Staff of the Challenger Street Newspaper plan to resurrect Homer as a goodwill ambassador for homeless people. His first show will be at City Hall in March, with the annual April 1 birthday party to follow. – M.K.