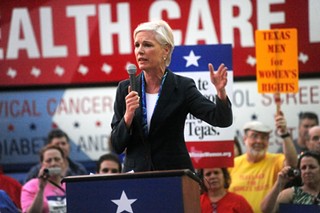 Cecile Richards of Planned Parenthood speaks against a rule banning the provider from the Women's Health Program during a March 2012 Capitol rally. (Photo by John Anderson)

What happens when you boot Planned Parenthood out of a preventative health program? Less access to contraception and more taxpayer funded births, according to new research.

When Texas legislators crafted the Women’s Health Program in 2005 their primary goal was to decrease staggering state costs associated with Medicaid births. The program, implemented in 2007, sought to provide basic family planning – including birth control – for low-income, uninsured women who weren’t eligible for those services under Medicaid unless they were pregnant.

And their sensible, bi-partisan plan worked. In a 2011 report released by the Health and Human Services Commission, the WHP had reduced 6,721 unplanned, Medicaid-paid births. And in turn, it also saved the state millions ($37.6 million in its first two years of operation) – which should have been music to conservative ears. However, instead of bulking up the cost-saving waiver program, anti-choice legislators – on the hunt to attack abortion providers – gutted it.

In 2011, lawmakers rewrote provider eligibility rules to exclude abortion affiliates (i.e. Planned Parenthood) from the program, even though none of the WHP providers offered abortion care. The exclusion rule caused Texas to lose 90% of its federal matching grant funding, as the move was considered a violation of federal law. And since Planned Parenthood was the single largest provider, serving around 50,000 patients, the program took a major hit.

“We are extremely familiar with the impact of this first-hand,” Sarah Wheat of Planned Parenthood of Greater Texas tells the Chronicle. The majority of its centers, including the Austin location on E. Seventh Street, participated in the WHP. “It was really one of those rare public health success stories … Governor Perry and his allies at the Texas Legislature dismantled the entire program to meet political goals and the women lost access to healthcare screenings and exams as a result." Data following the removal of Planned Parenthood shows the new, Texas-run program is serving significantly fewer clients.

And the latest research reaffirms more negative consequences. From 2011-2014, there were 35% fewer claims for long-acting, reversible contraceptives, according to a recently published paper by the Texas Policy Evaluation Project in the New England Journal of Medicine. There was also a 31% drop in claims for injectable contraceptives, which also saw a decrease in the rate of continuation. And how about the Medicaid births the program was initially intended to curb? The rate of childbirth covered by Medicaid rose among those injectable contraceptive users by 27%. Researchers say, “it is likely that many of these pregnancies were unintended, since the rates of childbirth among these women increased in the counties that were affected by the exclusion and decreased in the rest of the state.” (Medicaid and other public insurance programs paid $2.9 billion for costs associated with unintended pregnancy in Texas, according to a 2015 Guttmacher Institute report.)

“We examined differences between counties that had and did not have a Planned Parenthood affiliate, finding worse outcomes in places impacted by the exclusion; whereas places unaffected by the exclusion continued as they had before,” said Amanda Jean Stevenson, lead author and doctoral candidate at the The University of Texas of Austin. “The U.S. continues to have higher rates of unintended pregnancies than most rich nations, and we know that U.S. and Texas women face barriers as they try to access preventative services. It’s a public health issue that Texas women struggle to achieve their reproductive goals.”

So, let’s get this straight: The Texas Legislature devised a plan to reduce unplanned births, then came up with a new strategy to cut the dominant provider out of the program which has blocked access to the very thing that helps prevent unplanned pregnancies. Now, evidence shows this likely created more of those pregnancies – doesn’t seem like the new plan is working.