An already busy City Council year – after one meeting – won’t ease up anytime soon. And though there’s a wide range of pending business – general transportation, affordability, short-term rentals, major contracts, even Council’s own rules – TNC’s remain the elephant on the dais. 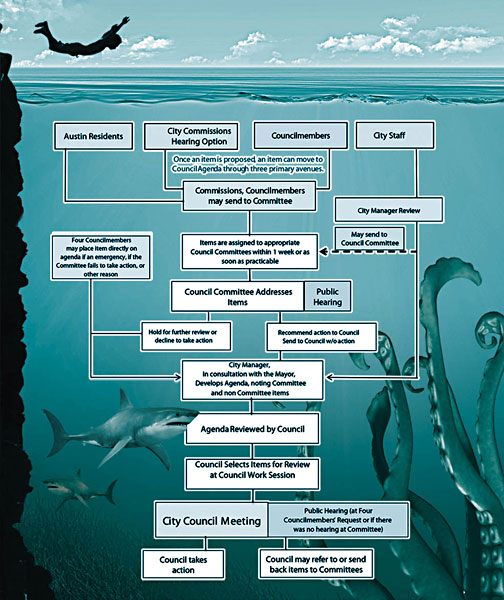 Last Thursday’s meeting (Jan. 28) lasted into the wee hours (adjournment about 2:15 a.m. Friday), and although the matter of the moment was short-term rental regulations, the afternoon’s transportation network company debate took enough time and testimony that nearly everything else (especially hours of public testimony on PUDs and STR’s) was pushed into the late evening. (The timing became its own issue, as Council members lamented their inability to limit the long meetings, and vowed to do better going forward … if only they can find the time.)

Tuesday’s morning work session (still in progress mid-afternoon) considered a few other things – notably a fledgling attempt to explore if the city can assume some of Austin ISD’s property tax burden, thereby lessening state recapture and total tax bill – but soon enough the dominating subject became the Uber-&-Lyft-underwritten petition supporting a TNC-written ordinance. City Clerk Jannette Goodall reported that the roughly 23,000 or so submitted petition signatures (about 19,000 were required) had been certified, there was a brief discussion of the statistical methods employed in certification, and the discussion moved to what happens next.

Under the City Charter, Council doesn’t have much choice: it can either adopt the ordinance petition as drafted or submit it to the voters in May. In an extended disquisition, Mayor Steve Adler said he abhors “binary choices,” and still hopes to come up with some compromise solution that would satisfy a divided Council, the TNC’s, TNC drivers, the various nonprofit orgs, public safety advocates, etc. (Almost entirely lost in the discussion have been some 900+ full-time, mostly minority cab drivers whose livelihoods have been undermined by the part-time “contractor”-model TNC’s.) Uber and Lyft have already rejected the mayor’s “Thumb’s Up!” fingerprint incentive, but the mayor suggested that perhaps a couple of weeks’ deliberation might turn the tide in some yet to be determined way, via another "innovation ordinance."

The rest of the Council was polarized between those who would simply accede to the petitioners (Don Zimmerman, Ellen Troxclair) and those who prefer going to voters and making their case (Delia Garza, Sabino Renteria), with a spectrum in between. For the moment, they tentatively decided to hear public testimony on the matter Thursday evening (6:30 p.m.) and perhaps again Feb. 11, and use that time and those discussions to find a way forward.

And if there’s time left over, there’s plenty of other work. Some highlights:

• Health and Human Services: Four proposals to provide additional youth education services, including three (Items 12, 14, 15) that would take on some of the load now carried by Austin ISD for parent support services, after-school enrichment, and student mentoring.

• Art vs. ReManufacturing: Austin Resource Recovery wants to sell a piece of land near ABIA to help finance its recycling/remanufacturing facility (Item 45); Mayor Pro Tem Kathie Tovo wants to use it for a proposed Artspace live/work project (Item 38).

And there’s more, of course, where all that came from. For more on City Council, follow the Daily News and this week’s print edition. Thursday's agenda is available here.