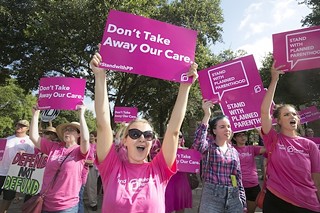 Protesters in support of Planned Parenthood demonstrate as a hearing on the sale of fetal tissue is held at the Texas State Capitol in July. (Photo by Jana Birchum)

After two months of review, a Harris County grand jury chose not to indict Planned Parenthood Gulf Coast over allegations of unlawful misconduct on Monday – they did, however, indict two anti-abortion activists involved in making the allegations against the reproductive health provider.

In July, Gov. Greg Abbott launched an investigation into Planned Parenthood’s practices following the release of undercover, highly edited videos attempting to showcase the sale of fetal tissue. Filmed by fervent anti-choice activist group the Center for Medical Progress, the dubious videos have been widely debunked, but that didn’t stop Abbott, Attorney General Ken Paxton, or Lt. Gov. Dan Patrick from going after the health provider. Over the summer, Patrick called for a special meeting at the Capitol to debate the issue. The hearing amounted to a witch hunt led by testimony from anti-choice groups.

David Daleiden, director of the Center for Medical Progress, and Sandra Merritt were both indicted for tampering with a governmental record, a second-degree felony. Daleiden, who spurred the creation of a fictional biomedical company to procure fetal tissue, also received an indictment for prohibition of the purchase and sale of human organs. Both used fake names and drivers’ licenses when undercover.

The indictments are an important victory for Planned Parenthood as it faces politically motivated backlash from the state on several fronts (including a threat to revoke its participation in the Medicaid program based in part on the discredited CMP videos), but should not be a surprising one – several other states (including Indiana, South Dakota, Florida, and Georgia) have cleared Planned Parenthood of any wrongdoing.

“We were called upon to investigate allegations of criminal conduct by Planned Parenthood Gulf Coast,” said Harris County District Attorney Devon Anderson in a statement. “As I stated at the outset of this investigation, we must go where the evidence leads us. All the evidence uncovered in the course of this investigation was presented to the grand jury. I respect the grand jury’s decision on this difficult case.”