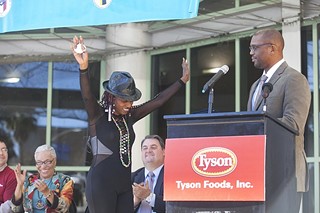 Lola Stephens-Bell, also known as the Nubian Queen, is honored for her long-term volunteer efforts to feed the hungry with an official City of Austin Day from Kazique Jelani Prince of the Mayor's office, and the gift from Tyson Foods of a truckload of food and a new van to deliver it in. Jan. 15, 2016. (Photo by Jana Birchum)

In this week's news roundup: a candidate for District Attorney probably didn't have enough legitimate signatures to appear on the ballot, and it probably won't matter; a neighborhood association urges developers to build urban density; 'single-member districts' come to Austin; and more...

• Elusive Eligibility: 345th District Judge Stephen Yelenosky indicated Friday that Democratic District Attorney candidate Gary Cobb's name will almost assuredly remain on the ballot when he denied a motion for temporary injunction filed on the grounds that Cobb – currently an Assistant District attorney within Rosemary Lehmberg's office – included at least 44 illegitimate signatures on the petition that accompanied his candidate application. Ruling the 44 signatures invalid would have reduced Cobb's total number of registered signatures to a figure below 500, thereby rendering Cobb ineligible for candidacy.

The lawsuit was filed Monday by the Travis County Democratic Party, which sought a ruling once and for all on whether or not the hasty nature in which Cobb's petition was filled out would bar him from election. One challenger, Rick Reed, originally mounted an effort in December to remove Cobb's name from the ballot on these same grounds, filing a suit with the 3rd Court of Appeals after the TCDP refused to hear his argument. Ballots for the March 1 primary locked on Tuesday, which means Cobb's name would technically be on the ballot whether he was eligible to run – leaving the possibility open that Democrats could have voted for a candidate who could not actually challenge long Republican candidate Maura Phelan in the general election.

Yelenosky's refusal to issue a temporary injunction does not altogether close the book on this saga of technicalities – a full hearing is currently set for early February – however it does provide the strong indication that Cobb will emerge victorious from the lawsuit. – Chase Hoffberger

• If You Build It, They Will Come: In what might well be a historic first for Austin neighborhood associations, the Mueller Neighborhood Association has passed a resolution asking that the Catellus Development Corp. build out the neighborhood to "full density," that the city work with Catellus and Capital Metro to address transit issues that would otherwise limit density, and that the City Council consider revising Mueller's planned unit development "to allow for a significant increase of density in terms of number of dwelling units, building heights and allowances of commercial and retail square footage, so long as all new density (i) adhere to the high standards and sound principles of urban design embedded in the [PUD] Design Book, (ii) maintain all existing and planned parks and (iii) to the extent permissible by law, retain the commitment to reserve 25% of all housing stock for Affordable Housing." The resolution responds in part to Mayor Adler's call for 100,000 new units to accommodate residential growth over the next 10 years. In a press release accompanying the resolution, MNA Chair David Neider said, "Increased urban density is key to addressing the challenges facing Austin as it strives to grow as a compact and connected city. Affordability, economic segregation, and traffic congestion all can be addressed by increasing the number of people per square mile, and this resolution directly addresses Mayor Adler's objective of adding 100,000 housing units to the city core." It is virtually unprecedented for a local neighborhood association to request greater residential density within its boundaries, but MNA Steering Committee member Mateo Barnstone said, "Density improves social interconnections, energy efficiency, healthy families and helps produce a quality of life reminiscent of urban neighborhoods of a half century ago. We hope that this remarkable resolution can serve to influence planners to reexamine and update their attitudes toward density." – Michael King

• Meet Mayor Pangloss: Last Wednesday, KLRU sponsored another showing of "10-WON!," the documentary about the coming of single-member districts to Austin, focusing primarily on the campaign itself. This was the TV version, slightly different from the somewhat longer version [*see correction below] shown at the Alamo South in November by the four producers (Steve Conn, Judy Maggio, Deep Nasta, and R. David Ruiz). The filmmakers still hope to raise sufficient funding for an extended version, but Maggio (the former news anchor now representing Leadership Austin) hosted this 30-minute take before a studio audience as the introduction to a "Civic Summit" panel featuring Mayor Steve Adler, District 1 Council Member Ora Houston, Engage ATX leader Annie Dlugokecki, and Austin ISD District 6 Trustee Paul Saldaña. The panelists discussed the first year of the 10-1 Council – all were enthusiastic about the outcome, although a bit vague on details; the fate of the "gentlemen's agreement" much discussed in the film (the consensus was that it is "gone for good," in the mayor's phrase, although Houston's tenure on City Council depends upon its current iteration), and the future of Austin, i.e., how do we address the chief drawback of prosperity: explosive growth. Dlugokecki said her organization attempts to engage "millennials" in the local community, and pointed out that young Austinites tend to be tech-literate renters, not the traditional residential profile. Saldaña (the only native Austinite on the panel) recalled that accelerated change has been a local characteristic since he was a boy in the Holly Street neighborhood, and that the city still needs to find ways to integrate all its communities in the rewards of growth and economic development. Mayor Adler characteristically celebrated the city and the new Council's process, describing it as "infinitely better than what we had before, but it could be infinitely better yet." The 10-Won! documentary airs Jan. 22 at 8 p.m., followed immediately by the Civic Summit panel. – M.K.

• Eckhardt's New Year: Travis County Judge Sarah Eckhardt held a 2016 "Kickoff" press conference Jan. 11, reviewing 2015 and previewing projects for the new year. She began with birthday greetings for her son Hank (his 15th) and for her good friend, longtime civic activist Shudde Fath (who recently turned 100). Eckhardt recounted what she called last year's "steps to lighten the heart of compassion" – the return of in-person visits and cheaper phone calls to Del Valle jail inmates; 3,000 new acres of park and conservation lands; 50 miles of bikeways and sidewalks. She said the new year would bring more park and conservation lands, a new county-wide public information office (in part the result of the failed courthouse bond initiative, which suffered from poor public outreach), an affordable housing partnership on county land on Airport Boulevard, a regional groundwater study, and better flood and fire disaster collaboration among regional agencies. She also asked county residents for help in promoting better transit and transportation plans, exhorting citizen engagement with the Central Texas Regional Mobility Authority. "We cannot remain stuck in our cars by ourselves on endless ribbons of asphalt," Eckhardt said. She asked residents to demand park & ride and rapid bus service on toll roads, and to support flood reclamation projects and investment in low income communities. Obliquely addressing the unfulfilled need for more courthouse space, she asked that the county "take an honest look and re-imagine the way we deliver civil and criminal justice." "People come to court when they are at their lowest and most vulnerable," Eckhardt said. "Courthouses are always houses of conflict. But they can also be houses of healing and rehabilitation." She asked citizens to hold officials "feet to the fire" to build "safe and respectful court spaces." The entire press conference is available on the Travis County web site media portal. – M.K.

*Correction: This description of the earlier version originally read "rough cut," but more accurately, the two versions differ in length and detail, and the filmmakers hope to expand the film version into a longer documentary of the 10-1 history.