Austin: It's like a whole other country (from Texas) 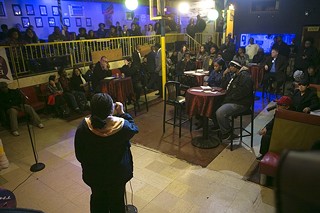 An emergency Townhall meeting organized by the Austin Justice Coalition following the failure to indict the police officers responsible for the shooting death of Tamir Rice. Austin, Tx., Dec. 19, 2015 (Photo by Jana Birchum)

In this week's news roundup: several more Austin establishments join the list of businesses banning open carry in light of recent legislation; a police officer receives recognition and an investigation; the Human Rights Campaign gives Austin an perfect score for its trailblazing LGBTQ legislation; and more...

• Stow Your Weapons: What do the Alamo Drafthouse, Regal Cinemas, Chuy's Mexican restaurants, HEB grocery stores, Torchy's Tacos, and Whataburger have in common? They are among the dozens of commercial establishments that have confirmed they will not allow "open carry" of firearms in their stores, following the January 1 effective date of the Legislature's general permission of more visible guns in Texas. According to the Moms Demand Action for Gun Sense in America, "Dozens of businesses, including thousands of locations across the state, will be exercising their right to prohibit individuals from openly carrying guns in their establishments. Throughout the fall and winter, the Texas chapter of Moms Demand Action reached out to businesses large and small, sometimes going door-to-door, to educate them about the new law and to urge them to prohibit open carry. We also provided a resource to help businesses understand how the new law works, as well as what they can do to prevent open carry in their stores." The list is being expanded as Moms Demand Action contacts more businesses, and more companies confirm that they will adopt similar policies – which require specific signage designated by the state. Activists are encouraging consumers to thank the management of businesses discouraging the proliferation of guns, and to let others know that they won't continue to patronize establishments that allow open carry. Follow the Twitter hashtag #GroceriesNotGuns, and you can review and monitor the list of cooperating businesses at momsdemandaction.org/campaigns/texas-businesses-say-no-to-open-carry. – Michael King

• Equality Rules: The City of Austin is celebrating its 2015 rating on the Human Rights Campaign Municipal Equality Index, intended to score a city's progress on human rights for Lesbian, Gay, Bi-sexual, and Transgender people. In December, the city announced that Austin has achieved a perfect 100 score for three years in a row. According to the Human Rights Campaign, "the Municipal Equality Index (MEI) examines the laws, policies, and services of municipalities and rates them on the basis of their inclusivity of LGBT people who live and work there. The 2015 MEI rates a total of 408 cities from every state in the nation, which is an increase of more than 55 cities rated in 2014." In its press release, the city’s Human Resources public information office pointed to previous City Council's adoption of transgender-inclusive employee benefits policies and early adoption of domestic partner benefits, and reported that Austin is "leading the way" in Texas, since "the average score for the other 22 Texas cities assessed is 32, well below the national average of 56." Cities are scored on their non-discrimination laws, employee policies, municipal services, police practices, and overall relationships with their LGBT communities. Equal Employment and Fair Housing Office Acting Administrator Gail McCant said: "The perfect score rating is consistent with the EE/FHO mission to endeavor that all people receive fair treatment and pursue their opportunities on an equal basis. I'm proud to work for a municipality that makes every effort to ensure equality for all its citizens." The full MEI can be reviewed at the web site of the Human Rights Campaign. – M.K

• Good Cop, Bad Cop: In a strange twist on the very premise of chronology, APD Sergeant Adam Johnson has received an award specific to the month of Dec. 2015 for work done by the 17-year veteran in Nov. 2014. The National Law Enforcement Officers Memorial Fund selected Johnson as the recipient of its most recent Officer of the Month Award. In doing so, the selection committee specifically centered its reasoning behind Johnson's acts on Thanksgiving night, 2014, when he fired a one-handed, 300-foot shot that fatally wounded Larry McQuilliams, the 49-year-old who'd gone on a shooting spree of banks and various government buildings. More recently, on Feb. 4, 2015, Johnson was named as a defendant in a civil rights case filed by 24-year-old Caroline Hallway that pertains to a 2013 arrest for driving while intoxicated. In the suit, Hallway alleges that Johnson used his boot and body weight to hold her down during a blood draw, and was present during multiple officers' use of excessive force against her. In July, U.S. Federal Judge Sam Sparks dismissed Callaway's claims alleging Johnson (and colleague Patrick Oborski) was negligent and assaulted her, but denied Johnson's motion to dismiss charges of excessive force, as well as his request for qualified immunity. – Chase Hoffberger

• Stickland, the New Claytie Williams: Remember the 1990 Texas gubernatorial election, when Clayton "Claytie" Williams lost the race to Ann Richards when he compared rape to bad weather ("If it's inevitable, just relax and enjoy it")? It seems that Rep. Jonathan Stickland, R-Bedford, is getting a sharp refresher course on that piece of political history. Last week, his primary opponent Scott Fisher unearthed some old message board postings from last decade by Stickland, looking for advice on growing marijuana and cheating on drug tests (see Fill a Bowl for Stickland, Dec. 30, 2015). Those postings were just embarrassing for the Tea Party favorite, but he faces much sterner criticism for another post, in which he dismissed the concept of marital rape. He wrote, "Rape is non existent in marriage, take what you want my friend!"

Stickland initially apologized for this comment, telling the Texas Observer that "I can only repent and ask for forgiveness from the people it offended and hurt. Rape is serious and should never be joked about the way that I did regardless of my age."

However, Fisher wasn't finished, noting that Stickland was part of a Tea Party rump that voted against House Bill 189 last session. That measure, which took effect with bipartisan support last September, increased the statute of limitations for a slate of sexual crimes against minors from five years to 15. It also removed the statute in cases in which there is probable cause that the defendant committed the same or similar offences against five or more victims. His office then sent out a second press release, noting that Stickland had also voted against another anti-child abuse bill, HB 1010, back in 2013. – Richard Whittaker.

• Ante Up!: Despite some misgivings among City Hall observers and on the dais, City Council voted in December to ask each of the 10 district Council members to provide a list of transportation project priorities for their districts – each directly assigning $1.9 million of the available Capital Metro Quarter Cent sales tax fund for road and mobility projects in their districts. The lists (selected primarily from proposed but unfunded Transportation Department projects) will be reviewed by the full Council in its first 2016 meeting (Jan. 28); highlights of lists that have been compiled and released thus far (as reported by KXAN-TV) include:

• Council Member Sabino Renteria (District 3): intersection improvements, and an emphasis on sidewalks, as well as a bike lane along Riverside from I35 to Ben White ($400,000)

Beyond the 10 district Council allotments, the remaining $2.8 million in the quarter-cent fund will be designated for projects by Mayor Steve Adler. Most Council members used existing Transportation Department project lists for their selections, but D6 CM Zimmerman added on his own the pedestrian bridge near Gateway Church (where he regularly holds his district "town hall" meetings).

When Council was discussing whether to allot these funds by district, questions were raised about "ward politics" – funds being used for district favoritism or patronage – as well as Council potentially displacing the statutory role of city staff in executing Council policy and managing city projects. Transportation Department staff normally identifies priority projects, and "cross-district" roads or other projects present another problem. Certain heavily traveled neighborhoods may have more pressing transportation needs than others – but in the end, Council decided to divide up the pie equally and let Council members and their constituents independently consider district priorities. – M.K.

• Crashes Up: Two traffic fatalities suffered Dec. 31 brought 2015’s tally to 102 on the year, the highest figure the city of Austin has recorded since it began tracking fatalities in 1985. Only 63 people died on city streets in 2014. – C.H.