During the 2015 legislative session, anti-choice lawmakers succeeded in throwing up substantial barriers to abortion access for some of the state’s most vulnerable – abused, neglected minors. And yesterday, the Texas Supreme Court made those rules even more difficult. 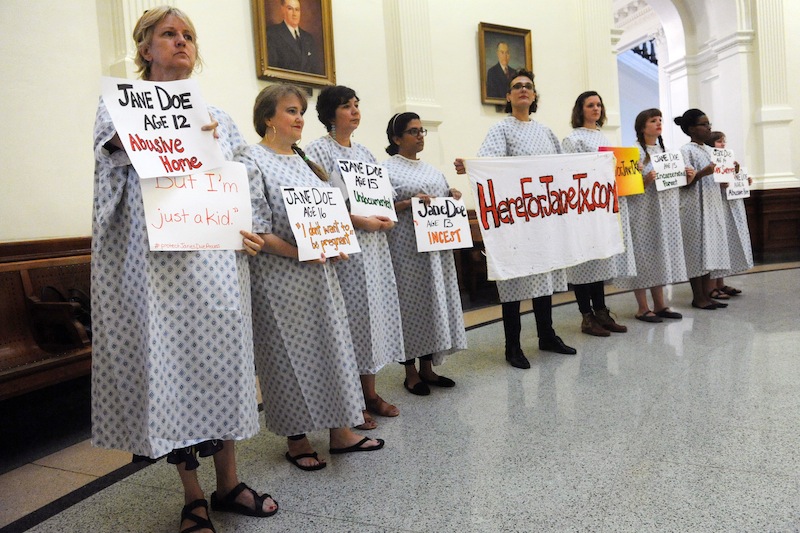 Activists protest judicial bypass restrictions at the Texas Capitol in May. (Photo by John Anderson)

House Bill 3994 by Rep. Geanie Morrison, R-Victoria, restricts judicial bypass – the legal process by which a teenager averts parental consent to undergo abortion through securing permission from a judge. Many of the around 200 minors that seek judicial bypass annually have no relationship with their parents due to abuse, deportation, incarceration, drug addiction, or death (see "Suffer the Children," May 22). Others fear physical violence if their pregnancy is revealed. Backers of the bill claimed the process was full of "loopholes" and not stringent enough, while the attorneys and advocates that actually work to represent these young women applaud the process as a vital safety net.

Keeping with the state’s goal of decimating abortion access, Rep. Morrison’s bill added several drastic barriers to the process including forcing the minor to provide the judge her home address and phone number and extended the time for a judge to rule on whether a pregnant teen can secure an abortion from two business days to five, a measure seen by reproductive health advocates as a harmful stalling tactic to delay or prevent the procedure altogether. “When a minor cannot even get a hearing or a court ruling in time, the state is then making her decision for her,” said Susan Hays, founder of Jane’s Due Process, an organization that assists teens with judicial bypass. “Such abuse of state power amounts to an “absolute veto” of her decision and is under U.S. Supreme Court precedent unconstitutional.” The law also restricts where the minor can petition a judge; if her home county population exceeds 10,000 residents she must file there. “How heartless for the law to have no exception for a rape survivor fearful of seeing her rapist at the courthouse,” said Hays.

If that weren’t bad enough, on Tuesday, Dec. 29 the Texas Supreme Court issued rules governing the process that are even tougher than the original law. For instance, under the new rules, a minor’s application for abortion access is denied if a judge fails or refuses to rule after five business days (the law left what to do in that instance vague). The Court also struck the “anonymous” protection for young girls, allowing their real names to be identified in court documents.

In crafting the rules, the Court dismissed recommendations from its own Advisory Committee (made up of prestigious lawyers and judges, many of whom were conservative) that sought to scale back possible breaches of constitutionality. Hays sat on a subcommittee that advised the group and says they were accepting of the ideas to create a process to ensure judges act in a timely manner or to appoint a new judge if he or she refuses to hear the case – but clearly the justices didn’t agree.

“The Court has made the law as mean as it could have been,” Hays tells the Chronicle. “It’s now the most extreme judicial bypass process in the country. (Hays notes Alabama’s judicial bypass restrictions are also extremely harsh, and are being challenged in federal court.) The game the state, and now the Court, is playing is ‘stall her out so she can’t get an abortion’ – and [2013 abortion law] House Bill 2 has made that even easier as half the clinics have closed.”

The judicial bypass law is expected to go into effect on Jan. 1.