Searching for a King

Debating leadership in the wake of the Tamir Rice decision 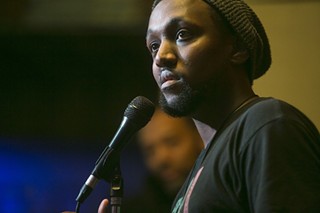 Following emotional ruination, social justice leaders themselves are looking to be led by a King – or at least one using the title. After the announcement that two Cleveland police officers would not face charges for killing 12-year-old Tamir Rice, activists went looking for whom they perceived as the big gun.

Writer Tariq Touré, and other activists, have rolled out a Twitter campaign aimed at Cleveland Cavalier forward LeBron James – using #NoJusticeNoLeBron – to plead that the native Ohioan boycott playing until the Justice Department “imprisons the murderers of Tamir Rice.” Using the University of Missouri football players’ defiance and other examples of powerful athletes taking Herculean political stances, the activists took LeBron to task. They excoriated the superstar for his immediate inaction – though he did actually speak about it, as he has previously, on other high-profile killings of young black men.

The other side, of course, is whether placing colossal onus on one athlete is the correct mode (and medium) of action. Calling on an athlete to take a stance is also a very different thing than applauding those who do so of their own volition. While it’s more than fair than to ask the face of the NBA – an immensely profitable, largely African-American league – to act out in support, must he be specifically called out, alone?

“But I think the most important thing that we all need to understand, the most important thing, this issue is bigger than LeBron,” James said. “This issue is bigger than me. It’s about everyone. And gun violence and tragedies and kids losing lives at a young age, some way, somehow we need to understand that that matters more than just an individual.”

Frankly, the NBA isn’t going to stop because LeBron stops playing. Further, having LeBron push his chips into the middle, with no risk mitigation, is asking him to be an economic martyr. This sort of action for a particular injustice – that’s literally run on a murderous loop since the end of slavery – screams a special, yet understandable, desperation.

Last night, I went to the Tamir Rice Town Hall Meeting at the Historic Victory Grill, where men and women – led by fiery activist and Austin Justice Coalition Co-Founder Chas Moore – spilled themselves and asked for answers – in the same tone as the Twitter activists. It was an emotional gathering, filled with justified anger and sadness. Initially tearful at the start, Moore, a passionate leader in Austin’s black community, would eventually say he’d be willing to die for the his cause, if it would prevent the deaths of others – something I believed as he said it.

However, I knew this was partly the issue. Not in Moore's giving of his valuable time and efforts, and his black body – but of the assumed loneness heavily associated with such actions, as it fully exhibits a lack of community connectedness (which Moore also noted).

The black community has enough martyrs. Senseless acts of wanton, state-sanctioned violence against black Americans contribute names to the list: Tamir Rice feels fresh, but it's important to remember civil rights leaders long dead, such as Fred Hampton and Jimmie Lee Jackson. If the objective is to stay alive, we must have intricate, carefully aligned goals and missions. Firepower must be used judiciously, and with measured efficiency.

Additionally, African Americans don't need new leaders, as we have a King to turn to. One of the black community’s principal martyrs, Martin Luther King Jr. – and his contemporaries and the activists preceding him – have laid the groundwork, using two tactics in particular: use of economic might and participation in class struggle. Margaret Haule of Black Lives Matter, a speaker at last night's event, mentioned the support of black business. This is no small thing – as carryover in all directions is immense.

The boycotts suggested by the Nation of Islam and associated actors – through Justice or Else! – are positive steps forward, braced by the words of King's last speech. That April day in 1968, King would advocate anchoring "our external direct action with the power of economic withdrawal" in order to "redistribute the pain." However, last evening, Moore, a supporter of the boycott, questioned whether it had been effective.

Theologian Robert Farrar Capon referred to “right-handed power,” or the power to force an outcome. For those somewhat studied on the Bible, there are verses allocated to the stories and allegories of the God’s right hand and righteous right-handed swordsmen. It does not fall back, or fall victim to reaction of events – it creates them. King's economic rational called for a flexible, but uninterrupted right-handed gripping of resources.

When atrocities occur within the black community, at the hands of racists, we tend to turn inward, always gathering ourselves, our bodies. Then, we lash out on each other and our surroundings, i.e. Rodney King and the subsequent ruin of South Central L.A. – but no other areas. I do not suggest rioting or taking up arms, but a holistic utilization of our collective right-handed power.

In the 21st century, right-handed power means continuing to vet and vote for leaders who represent our ideals and can effect change in law. It means buying (or buying into) black-owned goods, directly or indirectly. It means boycotting items wherever reasonable. It also means venturing out into spaces where black (and brown) faces are rarely seen – to show that we exist. It means taking care of our cultural history, regardless of whether the city of Austin (or any other city) will or not.

The truth is the black (and brown) dollar wields a right-handed strength capable of solving a multitude of issues that plague communities – but all of the preceding must occur simultaneously with a boycott, and with reasonable assistance of white allies. Remember, it was Peter Norman – an ally from Australia – who suggested during the 1968 Olympics to John Wesley Carlos and Tommie Smith they each wear a glove.

Psalm 16:8 says, “I have set the Lord continually before; because He is at my right hand, I will not be shaken." Whether you are a believer or not, the verse stands true: We must not be shaken.