"Don't Be Getting Publicly Intoxicated"

This post has been updated. “You should never feel 100 percent safe,” at least, not according to Austin’s Police Chief Art Acevedo, who made this declaration to KXAN in November after being presented with a report on alleged sexual assaults by transportation network company (TNC) – i.e. Uber and Lyft – drivers. 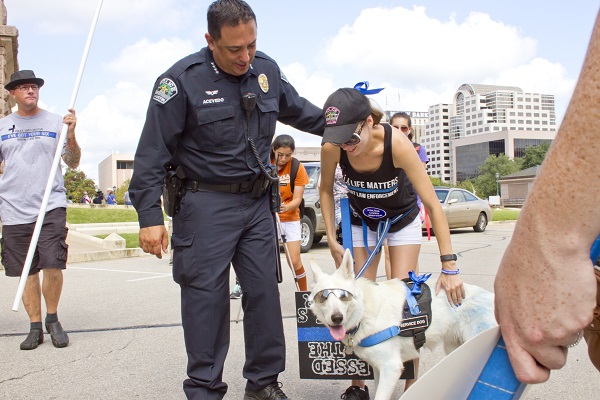 Since April, according to a Dec. 14 KUT article, there have been at least seven assaults by TNC drivers reported to the Austin Police Department, leading advocates to call for more extensive background checks for Uber and Lyft drivers. However, when asked about it by KXAN, Acevedo wasn’t quick to address the issue of fingerprinting TNC employees.

Instead, he took a moment to point a finger at the potential victims of sexual assaults. “[People] apt to commit a crime, look for easy targets. ... You should never feel 100 percent safe. You should be aware, and more importantly I always talk about, don’t be getting publicly intoxicated. It makes you really a target for people to really take advantage of you.”

In a city famous for its bar scene – Austin was recently named as having the “highest concentration of regularly drinking singles” by dating site Match.com – telling people to drink less could be considered a waste of breath.

But simply wasting breath would have been better than what Acevedo actually did, promoting a common victim-blaming trope about survivors of rape and sexual assault.

It’s especially troubling in the context of TNCs, seeing as intoxicated people choose to summon an Uber or Lyft in order to avoid committing the crime of drunk driving. Intoxicated people should not be punished for making the intelligent decision to not drink and drive by being raped by their Uber driver. And those same survivors should most definitely not be shamed and held responsible for being assaulted.

“[A] victim is never responsible for an assault,” SafePlace Director of Community Advocacy Emily LeBlanc told the Chronicle (LeBlanc was also quoted in the KUT article). “We cannot begin to address the epidemic of sexual assault until we as a community are willing to face the hard questions of how to prevent young men from becoming perpetrators. Prevention starts long before anyone orders a drink or an Uber. Prevention begins with teaching our children about safe and healthy relationships, helping families break cycles of abuse and teaching our young men that women deserve respect. We are all responsible for making Austin safe, and we want survivors to know that there is help available, that it is OK to come forward, and that rape is never your fault.”

After this post had gone to press, the Chronicle received a response to our request for comment from Acevedo's office. Acevedo writes:

"For years I have talked about how criminals prey on people they think will be easy targets. Consequently we have a high number of individuals who become intoxicated in public and end up being targeted for violent crime. My point is not to judge or discourage victims of violent crimes to report a crime, instead I hope to influence people to be aware of what goes on in our city and all big cities.

"Many victims of robbery and assault are specifically targeted because of Intoxication. I strongly encourage everyone not drink to excess in public and it is always best to have a designated sober person accompanying you if you plan on going out to drink.

"Regardless of the level of intoxication of the victim of any violent crime, we hope they will have the courage to step forward and report the crime to law enforcement."

This post has been updated to clarify that Acevedo's comments to KXAN were made in November, and to include Acevedo's response to a request for comment.