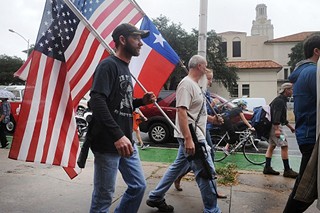 Open Carry Demonstration on The Drag on Dec. 12, 2015 (photo by John Anderson)

In this week's News Roundup: Austin leaders back from the Paris climate conference reaffirm their city's commitment to combat climate change; a former WilCo DA is suspended from what little political power he has on a small Pacific republic; a coalition of faith leaders urge the governor not to cut funding for Planned Parenthood; and more.

• Adler and Pool on Paris Agreement: The city of Austin was represented in Paris at the U.N. Conference on Climate Change by Mayor Steve Adler and District 7 Council Member Leslie Pool, primarily to work with other municipal representatives on objectives for local governments. They had since returned to Austin, but on announcement of the agreement, Adler and Pool issued a joint statement that thanked President Barack Obama and other world leaders for their work, and read in part:

"The agreement will unlock innovation and investment to reduce emissions and help our communities adapt to climate change. We are far from done, however. Cities generate 80% of the world's GDP, produce 70% of the world's greenhouse gas emissions, and house more than 50% of the world’s population.

"The agreement's ultimate success will depend on local leadership that Austin is happy to offer. Our city was an early adopter and has a great track record on reducing greenhouse gas emissions. … And our economy is growing not in spite of the commitment but in part because of it. …

"Last week in Paris, we joined more than 500 mayors and municipal representatives from 115 countries gathered at Paris's City Hall to make clear that cities can and will lead on climate by increasing the energy efficiency of our buildings, expanding renewable energy, adding electric vehicles to our fleets, and leading the search for other solutions besides. We have a lot of work ahead of us, but we are confident that Austin is equal to the challenge.

"We will implement the new agreement, as we continue to work tirelessly with those we represent to find more creative and innovative ways to combat climate change. … It is by leading on climate action in our city that we will build a healthier, more prosperous, more competitive Austin." – Michael King

• Thou Shalt Not Cutteth Planned Parenthood: More than 50 faith leaders have signed an open letter to Gov. Greg Abbott, calling on the governor to step back from his plan to cut Medicaid funding to Planned Parenthood. According to the rabbis and reverends, there appears to be something unjust and immoral about denying thousands of low-income women life-saving services – go figure. "Ensuring that everyone has access to comprehensive reproductive health care services, including affordable family planning and safe, legal abortion care, is a moral and social good," said Amelia Fulbright, founder and head of Labyrinth Progressive Student Ministry at the University of Texas at Austin. "But every year in Texas we see more efforts to limit that access by cutting funding, restricting providers and enacting medically unnecessary requirements that shut down clinics." Fulbright and about a dozen other faith leaders in or around Austin added their signatures to the letter. In response to the decision to remove Planned Parenthood from Medicaid enrollment, the health care provider hit back with a class action lawsuit against the state last month. While a trial date was initially set for today, Monday, Dec. 14, U.S. Judge Sam Sparks has postponed that hearing indefinitely. Sarah Wheat of Planned Parenthood of Greater Texas tells the Chronicle the state – while taking to social media to announce the decision before altering the provider – has yet to formally deliver an official notice of termination. – Mary Tuma

• Pacific Blunder: On Dec. 8, reviled former Williamson County District Attorney and chair of the state's Forensic Science Commission John Bradley got slapped with a ten-day suspension from his role as the Attorney General of Palau, a tiny archipelago of 250 islands a quick jump east of the Philippines, for apparently being insubordinate to the 20,000-person republic's Vice President and Minister of Justice Antonio Bells. According to Palau's Island Times, Bradley drew the ire of Bells after he issued a nomination for the region's Interim Special Prosecutor to attend a gathering of the Pacific Islands Law Officers Network without proper authorization; and that Bradley "continually ignored" a set of orders Bells assigned to him. The Times notes that Bradley plans to fight the suspension on the grounds that he's a presidential appointee and "am subject to removal only by the President." Bradley, you'll remember, is the same District Attorney who botched the Michael Morton appeal so badly that he was essentially stripped of his local credibility. He lost a 2012 bid for WilCo DA reelection to current DA Jana Duty. – Chase Hoffberger

• Cops Downtown: City Council approved a resolution to modify its meet-and-confer agreement with the Austin Police Association on Thursday in two different ways. The most finalized adjustment pertains to the way the city plans to staff its force during the spring music festival season – or time overlapping with South by Southwest. Beginning in 2016, the city will begin staffing downtown patrol assignments during the two-week period with volunteering officers, detectives, and sergeants working overtime – rather than displacing those same individuals who were otherwise assigned to a different task (like pulling a detective off a murder case so she can head Downtown to manage traffic). Early estimates suggest that the change will put the city out another $1.5 million. However, the hope is that day-to-day operations at APD see less of an interruption, and those who do sign up for the Downtown shifts will be less peeved about their assignment.

As part of the same resolution, Council voted to begin talks on an incentive program to encourage APD officers to live within the city. The Association had voted earlier this month to allow Council's deliberation on the topic. Right now, according to the Statesman, only 27% of the city's 1,700 officers currently live in Austin. Few specifics have been discussed, though Mayor Pro Tem Kathie Tovo mentioned Thursday – and APA Ken Casaday has stressed – that whatever incentives are created will remain optional. There are just as many reasons for police officers to want to live outside a city as there are reasons for those patrolling a city's streets to take up a local residence. We'll begin wondering how that reality somehow restricts the nature of the eventual incentives. – C.H.

• Riverside Survival: On Saturday afternoon, bicycle activists sponsored a "Survive Riverside" bike ride to emphasize the current risks of the street to bicyclists and pedestrians, and "to show how dangerous the street is in its current configuration." Bicyclists organized by Bike Austin rode east from Midway Fieldhouse, to Grove St and returned to The Buzzmill for a celebratory pint. Bike Austin is urging a "complete street" for Riverside – with protected bike lanes, traffic calming measures and pedestrian safety improvements. Endorsing the effort, District 3 City Council Member Sabino Renteria said, "Sadly, 2015 has been a record-breaking year for Austin [for] traffic-related injuries and fatalities. It’s no question that Riverside … has significantly contributed to these numbers. Therefore, I will work to make bicycle and pedestrian safety improvements on Riverside a Council priority … to put a stop to these wholly preventable tragedies." – M.K.

• Cooling the Planet: In Paris on Saturday, Dec. 12, at the U.N. Conference on Climate Change, 195 nations agreed to unprecedented targets in lowering greenhouse gas emissions that produce global warming. If the commitments are met – an enormous gamble – the goals include holding global climate change to less than 2 degrees Centigrade (working toward 1.5 degrees), reduce emissions from deforestation, create international funding mechanisms and an "enhanced transparency framework," and in principle eliminate anthropogenic emissions by 2050. The countries also agreed to re-establish new emission reduction commitments every five years. – M.K.