Having attracted national media attention with their plans to stage a mock mass shooting, today the organizers of the Life and Liberty Walk to End Gun Free Zones were content to end things on an anticlimactic note. Mass Farting protesters arrive at the scene of the Mock Mass Shooting. (Photo by John Anderson)

After holding an open carry walk down the Drag, and then claiming to take a break for lunch, at around 2pm, they posted on the event’s Facebook page, “LIVE DEMONSTRATION AT THE CORNER OF WHITIS AND 27TH STREET,” explaining the change in time in location by writing, “Because mass shootings are not advertised.” By the time the press, including the Chronicle, arrived on the scene, participants were lying on the ground, wearing ketchup-covered (to represent blood) orange Gun Free UT shirts, having apparently been “shot” by cardboard gun-toting “bad guys” covered in Sharpied tattoos (“because criminals have tattoos,” explained one of the men, who is perhaps unfamiliar with the widespread popularity of tattoos). The group posted its own video of the demonstration, which has to be seen to be believed, on Facebook. 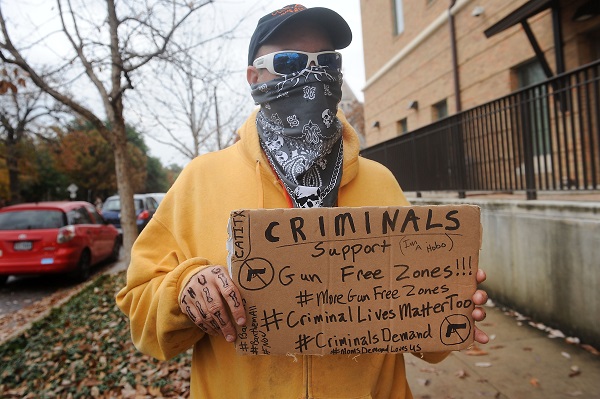 This is what a criminal looks like, apparently. (Photo by John Anderson)

Mass Shooting organizer Murdoch Pizgatti has taken the fact that the UT Campus Carry Working Group released its report recommending that guns be allowed in UT classrooms – for the sole reason that to do otherwise would be to violate SB 11 – the day after he announced his event as evidence that he had some effect on their decision, demonstrating that he's not clear on the difference between correlation and causation. 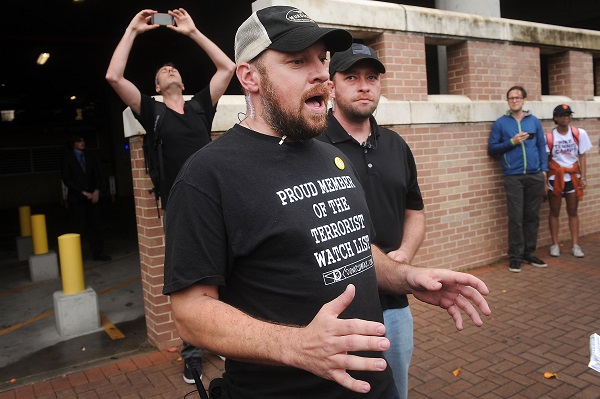 Unafraid to take credit where no credit is due: Murdoch Pizgatti (Photo by John Anderson) 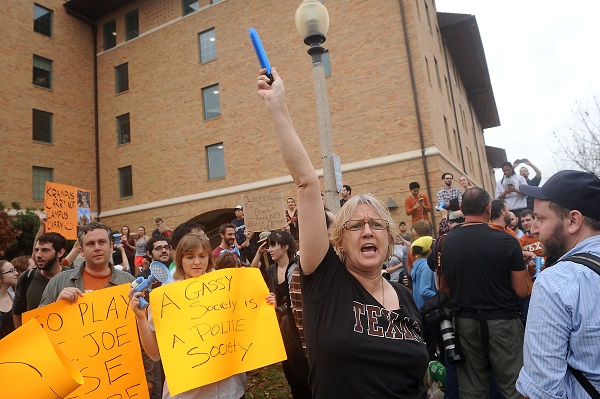 Mass Farting protest organizer Andrew Dobbs claimed victory over the mass shooting demonstrators, saying that they had moved their demonstration because they were scared of the farters, although Pizgatti told the press that it had been his plan all along to change locations, to prove the slow reaction time of the police and the press to mass shootings, an explanation that seems more plausible than concern about counter-protesters. Dobbs was correct, however, in his assertion that his protest was much larger. He explained his decision to create a fart-themed protest to the press by saying, "These people are being assholes, so we spoke the language of assholes." This post has been updated to include a link to video of the mock mass shooting. Additional reporting by Mac McCann. Visit @ACnewsdesk to see McCann's tweets and photos from the protests, and pick up next week's issue of the Chronicle, on newsstands Dec. 17, for full coverage of the protests and the controversy over campus carry at UT.