Says to do otherwise would violate SB 11

While acknowledging “the overwhelming sentiment on campus that concealed carry should not be permitted in classrooms,” UT's Campus Carry Policy Working Group Report recommends allowing guns in classrooms. 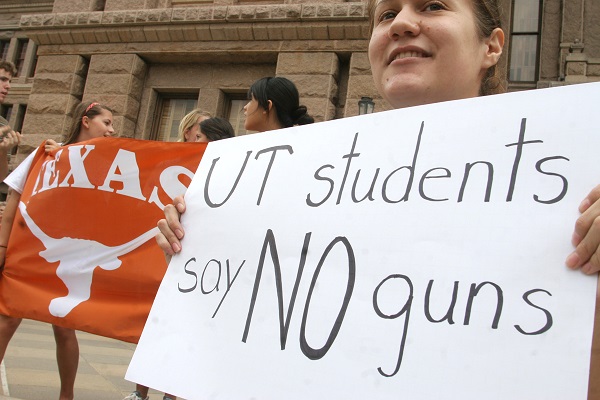 Their reasoning, according to the report, is that “Excluding handguns from classrooms would have the effect of generally prohibiting license holders from carrying handguns and so would violate SB 11.”

In total, the group was able to reach a consensus on 25 recommendations, which cover four categories: “how handguns must be carried and stored; where handguns must not be carried; incidental implementation measures; and proactive measures.”

The report also recommended not allowing concealed carry at any sporting events. Additionally, guns won’t be allowed just about anywhere with a significant amount of kids, including museums when pre-K through 12th grade students are visiting on a field trip or similar purpose.

Of the over 3,300 comments they received, “a very substantial majority,” the group says, “expressed opposition to or serious misgivings about SB 11 and implementation of campus carry.

We’ll have more in-depth coverage of the report and the community’s reaction soon.