Supporters of campus carry, which is set to go into effect on August 1, 2016, often argue that most gun owners are reasonable people. And that might be true. But not all gun owners are – whether it's conservative blowhard Eric Erickson shooting up a New York Times editorial, or, most recently, the people planning on a mock shooting near UT's campus. 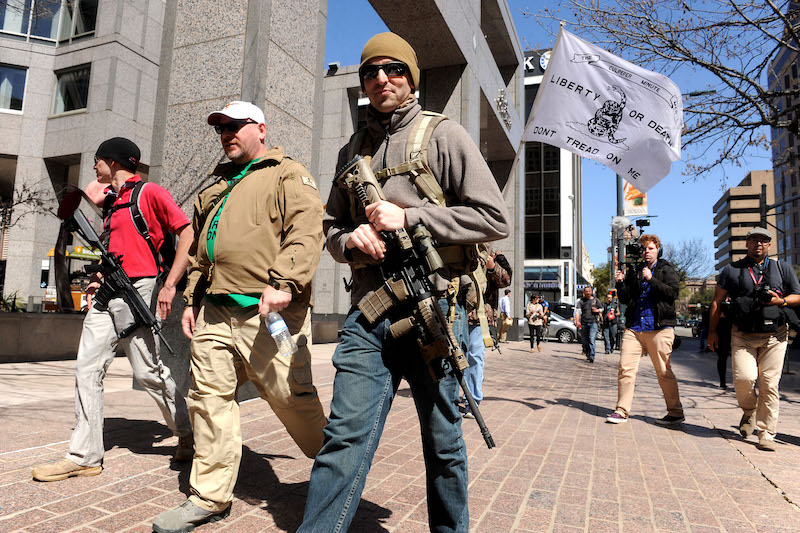 Yes, that’s right. On Saturday, Dec. 12, gun supporters will conduct a “Life and Liberty Walk To End Gun Free Zones,” which will include an epic “theatrical performance starting at 2:30pm,” according to their Facebook page. That “theatrical” performance will include a fake mass shooting – complete with fake blood, cardboard weapons, gun noises from bullhorns, and actors playing perpetrators, victims, and “armed” heroes saving the day. (According to the Houston Chronicle, the protest's organizers were planning on having the "victims" wear Gun Free UT shirts.)

Dallas resident Murdoch Pizgatti, who leads both of the involved groups, DontComply.com and Come and Take It Texas, said in an interview with the Chronicle that the performance will compare and contrast two different scenarios: one where “a criminal that wants to do harm” confronts an unarmed student population in “a gun free killing zone,” versus one where that criminal is stopped by a CHL (concealed handgun license) holder.

Before that, starting at 11:30am at 2426 San Antonio St., the group will “open carry walk with our rifles and legal black powder pistols,” moving down the Drag next to the UT Campus before ending at the San Antonio Parking Garage. There, they will put up their guns before kicking off the mock mass shooting. The group said in a Facebook post, “This is NOT about open carrying, this IS about my/our children’s safety on school property that WE are paying for” – despite the fact that the group plans to openly wield rifles and pistols right next to campus.

So what’s the goal of the performance? “Essentially, what we’re doing is educating the public on the dangers of gun-free zones and how they’re target-rich environments that allow people to be harmed,” Pizgatti says.

The group doesn’t have any plans to seek any sort of permit from the city or the university, since “theatrical performance art, such as this, is covered under the First Amendment freedom of speech.”

However, in a press release, UT Austin spokesperson J.B. Bird wrote, “The property or buildings owned or controlled by UT Austin are not, however, open to outside groups for assembly, speech, or other activities, including theatrical performances, as are the public streets, sidewalks, and parks.” Additionally, Bird noted, “When outside individuals come on campus and violate our rules regarding use of our grounds and facilities, they are asked to leave. If they do not, it becomes a criminal trespass matter. We suggest that any outside organizations planning such events on campus relocate them to other space where they would be allowed.”

In response, Pizgatti told the Chronicle that the group will perform on public property near the campus, so that it would still be legal but also still have the UT campus “as a backdrop.”

Notably, on that Saturday, many students will be studying for and taking final exams, a time that’s stressful enough without gun sounds being blared over bullhorns. UT professor Joan Neuberger, one of the leaders of the widely supported “Gun Free UT,” told the Statesman, “Staging a mass shooting during an anxious time for students – finals week – not only breaks rules but shows real disrespect for the feelings of students, faculty and staff who don’t want to have guns around them in the first place, but will be forced to put up with guns in public places in 2016.”

Pizgatti says that the group wasn’t aware that it was finals week when they planned the event, but says that the “small theatrical performance” will be near the edge of campus, not close to any classrooms, and will not disrupt any students studying for or taking exams.

Another professor involved with Gun Free UT, Ellen Spiro, told the Houston Chronicle about her approach to the protest: “Gun Free UT will treat them as if they are invisible. They do not deserve to be seen and heard by our children via the nightly news.”

Update: A group billing itself as "Austin residents and friends of the UT community" has planned a "mass farting demonstration" to protest the mock shooting. It will also be near, rather than on, campus. In a press release, organizers said to expect "[p]eople with fart noisemakers including toys, smart phone apps, whoopee cushions, their hands and potentially their own butts."