Organizing for justice in the African-American community

In October, the Justice or Else March was held in Washington, D.C., to commemorate the 20th anniversary of the Million Man March. Thousands came from across the country to protest “the widespread death, rising racism, mob attacks and police brutality on Blacks coupled with economic deprivation and stark poverty.” 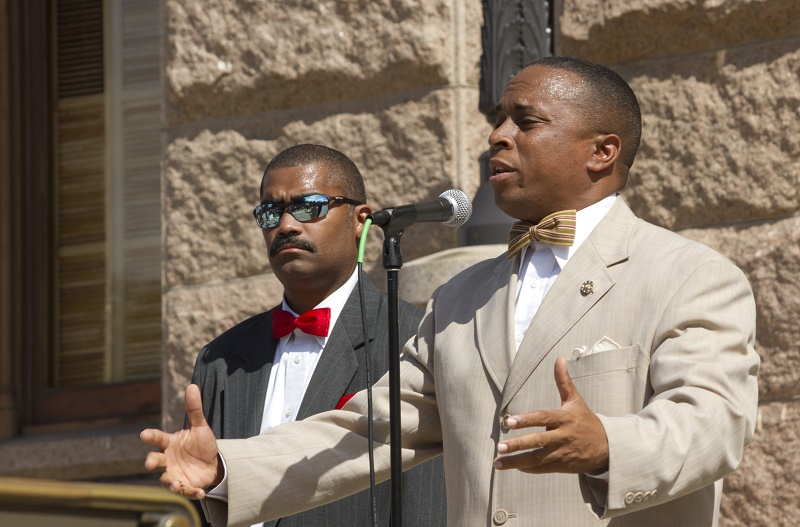 Among the attendees of the march was a busful of Austinites, including Brother Robert Muhammad of the Nation of Islam, Capitol View Arts Manager Clifford Gillard, and Austin Justice Coalition Co-Founder Chas Moore. Now the three men and other members of the Justice or Else Local Organizing Committee are hoping to build on the inspiration they felt at the march with Connecting the Dots for Justice, a community forum and black business expo taking place tomorrow, Dec. 10, at the St. James Missionary Baptist Church. They hope to have a discussion about how to “continue the organization and unity of the masses who are continually deprived of justice.”

Perhaps the most prominent campaign to be born from the Justice or Else March is the nationwide call to “boycott Christmas,” a challenge to African-Americans in particular to show their economic power by refusing to participate in this year’s holiday shopping and focusing on spending more money at black-owned businesses. Muhammad said that the campaign was inspired by Martin Luther King Jr.’s Poor People’s Campaign, which had begun shortly before King was assassinated, and is considered to have gone unfinished. In his final speech on April 3, 1968, King said, “Now the other thing we'll have to do is this: Always anchor our external direct action with the power of economic withdrawal,” urging his listeners to “redistribute the pain” through boycotts and to “strengthen black institutions.” He said, “Now these are some practical things that we can do. We begin the process of building a greater economic base. And at the same time, we are putting pressure where it really hurts.” The idea is that demands for equal rights for African-Americans will be taken more seriously if they’re tied to black buying power.

Muhammad pointed to the striking University of Missouri football players as a recent example of the change that can be made through a display of economic power and said an online list of black-owned businesses in Central Texas to aid participants in the boycott is in the process of being put together. Gillard said that support of black-owned businesses has to go “beyond the pastries,” referring to the fact that more mundane products and services, such as insurance and financial planning, are important to consider.

Other topics to be discussed at the forum are education, conflict resolution, getting out the vote, and the Larry Jackson Jr. case. Muhammad said that the manslaughter charges being dropped against former APD Det. Charles Kleinert was a “catastrophic blow … it is a miscarriage of justice and we cannot let that die.”

Speaking of working for change in Austin, Gillard said, “It can be tiresome, truth be told. Victories come with a lot of defeats.” He continued, “Austin is considered to be a shining city on the hill, but most of us are not seeing that glitter.”

Muhammad said a goal of the event is to come up with action items and plans, so that people have “actual instructions about how to work on making changes.” Moore added, “This is something that we in the community need to do … it’s our job as a community to come together.”