Council: Let's Hear It for Humanity

It’s not a frenetic week for City Council business, not only because we’ve entered the holiday season and the workload is relatively light, but also because Mayor Steve Adler and District 7 Council Member Leslie Pool are off to Paris together – not for a romantic sojourn, but to take part in the United Nations Conference on Climate Change. 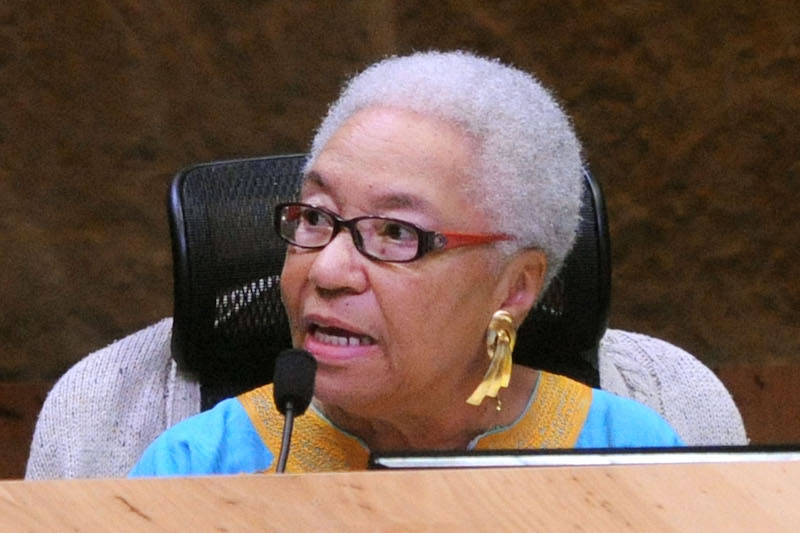 Ora Houston (Photo by John Anderson)
(Travis County Precinct 2 Commissioner Brigid Shea is also attending). Their votes will likely not be missed at Thursday’s special-called meeting (9am instead of 10), as only two Items are on the agenda: 1) the potential hiring of a consumer advocate (on behalf of residential and small business consumers) before Austin Energy, and 2) a resolution (sponsored by the mayor, Mayor Pro Tem Kathie Tovo (D9), D6 CM Don Zimmerman, and D5 CM Ann Kitchen) “affirming the City Council’s commitment to a fair and equitable appraisal system and its support of legal actions related to the level of appraisals of commercial property values.”

The first is a continuation of a discussion from the Nov. 19 meeting, and the dissatisfaction expressed on the dais that city staff, despite multiple attempts, had not succeeded in soliciting more candidates. The Item is posted for action on the designated vendor (Oxford Advisors, LLC), and work on the project (pointing toward next year’s rate plans) is scheduled to begin this month, so we’ll see if Council settles or kicks the can again.

Item No. 2 concerns the city’s ongoing challenge of commercial property appraisals by the Travis Central Appraisal District. In early November, the city’s lawsuit against TCAD was dismissed for lack of standing by state District Judge Tim Sulak, but according to a report in the Austin Monitor, the mayor believes the city should request a retrial rather than immediately appeal. The resolution as drafted – bearing a litany of self-justifying “Whereases” – would simply reiterate the city’s commitment to fair appraisals and whatever (unspecified) “legal actions” necessary to achieve them, so should be readily blessed on the dais.

The special-called meeting coincides with the regular meeting of the Committee of the Whole on Austin Energy Oversight, and that agenda is fairly light as well. Indeed, other than a Monday press conference for Council members to declare the commencement of “Austin Recycling Games” – a district competition to better engage citizens in the communal bliss of recycling – the action this week was in committee meetings, especially Monday afternoon’s Public Safety Committee, chaired by CM Zimmerman.

A good portion of the meeting was devoted first to executive session and then a curious discussion of “digital billboards” – industry advocates want to replace many current static billboards with the “new technology” of electronic signage that can be managed and changed via remote computers. Current city ordinances specifically ban lighted upgrades to existing billboards, and discourage any other proliferation – as architect Girard Kinney of Scenic Austin was happy to remind the committee. But committee members (Zimmerman, D1 CM Ora Houston, D4 CM Greg Casar) were willing at least to resolve that the folks currently developing CodeNEXT consider the digital boards (“We’re a city that welcomes new technology,” said Houston), without actually recommending their approval. They spent some time figuring out how to phrase that non-recommended recommendation – and then moved on to the more vexing question of the day.

Despite a visible lack of enthusiasm from his Council colleagues, Zimmerman was determined to discuss his proposal (“Spreading the Crazy,” Nov. 19) to have Austin join Gov. Greg Abbott in obstructing any local resettlement of Syrian refugees. He had recruited a few ex-military and law enforcement witnesses to testify against “terrorism,” while Executive Director Jo Kathryn Quinn and other staffers of Caritas of Austin – who have real experience with actual refugees – expressed their opposition to Zimmerman’s resolution. Quinn noted that any terrorist attempting to infiltrate through the arduous, lengthy refugee review process “would not be a very smart terrorist,” and more directly declared: “Terrorists are not coming through the refugee process. The people running from terrorists are coming through the refugee process.”

The testimony in favor of Zimmerman’s resolution had a frankly surreal air. It included complaints about Obama and our “porous Southern border” (where Syrians are in rather short supply), and even an overhead map compiled by self-designated “Islamic terrorism expert” Steven Emerson, purporting to show many existing “terrorist cells” in the U.S., supposedly untouchable by law enforcement – and with even less relation to any Middle Eastern refugees. (Emerson, readers may remember, immediately blamed the 1995 Oklahoma City bombing (by ex-U.S. Army soldiers) on Middle East radicals, and this year had to apologize for describing the city of Birmingham, England as a “no-go area for non-Muslims” – for which lunacy Prime Minister David Cameron called him “clearly a complete idiot.”)

Inevitably – and under the immediate shadow of the terrorist killings at the Planned Parenthood clinic in Colorado Springs, committed by a white, Christian U.S. native – Zimmerman’s doomed resolution was rejected 2-1. Its positive results, if any, were solely in the opposition it evoked from other Council members. First, there had been the repeated declarations from Mayor Adler (in response also to Gov. Abbott), welcoming refugees and “lifting Austin’s lamp” to the world. Casar, who noted that some of his own family members had been war refugees, denounced the “appalling” resolution from the dais, and was joined (in absentia) in a formal statement by Pool: “This agenda item is not about public safety,” the Council members wrote. “It is about using a small number of refugees as a political tool.… We believe in welcoming immigrants to Austin, as we have in the past, and as we will continue to do. Today, we continue to strongly support welcoming Syrian refugees to Austin.”

Just before the vote, Houston read her own prepared statement from the dais, acknowledging the “emotional topic” under discussion, and noting that fear can be generated by ignorance of the actual, complex review of all refugees before they can be resettled in the U.S.

Houston concluded: “I understand some people’s concerns about ‘the Other’ in our midst. I am more concerned about mass murderers and domestic terrorists who are born in the United States, who have the ability to move freely from state to state and kill innocent people to make a statement.

“In my opinion, there is a humane obligation to care for people who are part of the human race, regardless of their country of origin, ethnicity, culture, background, or religious affiliation.

“In this situation, I am going to err on the side of humanity. I will not be supporting the resolution.”

Whatever else Ora Houston will accomplish during her Council term, it will be difficult to surpass this one, as her finest hour.