In this week's News Roundup: the mayor welcomes Syrian refugees to the city, and encourages homes for veterans; Austin's sole Dem congressman backpedals hard from an anti-refugee bill; the Texas Board of Education opts for ignorance (again); and more. 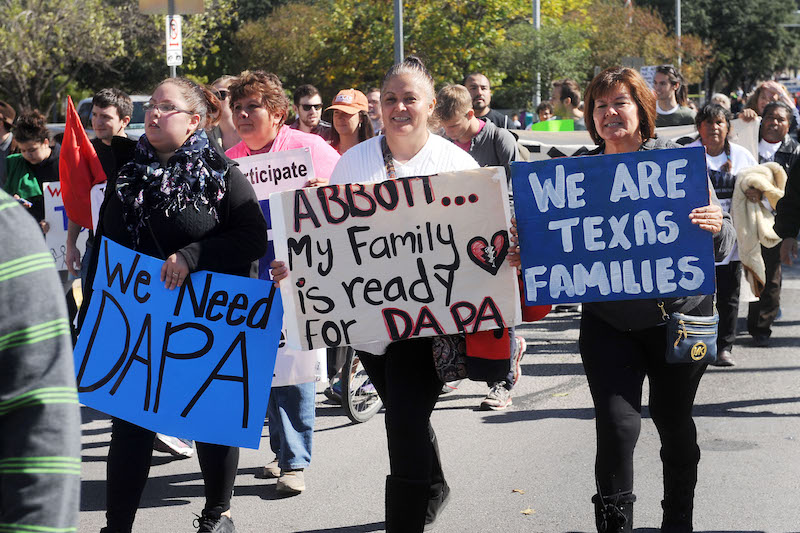 Activists gathered at the Governor's Mansion on Saturday, Nov. 21 at the end of a three-day pilgrimage from a Hutto detention center, protesting Gov. Abbott's opposition to immigration reform. (Photo by John Anderson)

• Mayor Welcomes Refugees: Writing in the Texas Tribune Nov. 20 ("Syrian refugees are welcome in Austin," TribTalk), Mayor Steve Adler cited the Emma Lazarus poem on the Statue of Liberty ("Send these, the homeless, tempest-tost, to me, / I lift my lamp beside the golden door!") and said that he welcomes Syrian refugees to Austin "in a way that protects both our safety and values." Adler noted state and local officials have no authority on refugees, but that Syrians are subjected to stringent security screening and that most of those few already admitted are women and children. He said he has joined more than 100 U.S. mayors in endorsing the statement by Cities United for Immigration Action: "Our hearts go out to the people of Paris and those impacted by these senseless acts of violence. The American values of freedom and opportunity define who we are as a country, and to extend that promise to Syrian families seeking refuge from the threat of terror is imperative. As municipal leaders, we seek always to protect our communities, while we honor the diversity and growth of our cities and counties. The United States has a robust screening and background check system that ensures our safety and security is protected, as we welcome those in need of refuge onto our shores." The mayor concluded: "I think it is important for me to lift Austin's lamp to the rest of the world. If America is to be a world leader – and Austin the shining city that it is – requires us to defend our values when it is hard – not just when it is easy." – Michael King

• Faith Fights Back: Adler's statement mentions statements by other "local and state officials," but does not specifically cite Gov. Greg Abbott's letter to President Barack Obama opposing any resettlement of Syrian refugees. Abbott has already directed the Health and Human Services Commission not to participate in any resettlement of Syrian refugees; he has since doubled-down, attempting to dictate his rejectionist policy to nonprofit charitable organizations. In a letter to 19 agencies working to resettle international refugees, HHSC Executive Director Chris Traylor directed them to notify the state of any plans to resettle Syrians and to end such plans. In response, Bee Moorhead, executive director of faith organization coalition Texas Impact, wrote Traylor, saying in part, "HHSC's action constitutes an unprecedented attempt on the part of a state agency to pressure private, nonprofit organizations to violate federal law and their federal contractual obligations." Moorhead cited federal law requiring that "Assistance and services funded under this section

• Housing Veterans: Mayor Adler is continuing to promote the "Housing Heroes Austin" effort initiated under Mayor Lee Leffingwell and continued this year, to provide homes for all locally homeless veterans by the end of 2015. Last week he sent a letter describing the program's progress and requesting more help. "At the beginning of the year, there were 234 homeless veterans in Austin," he reported. "When I took up this challenge in May, there were 200 remaining without homes. By Veterans Day, we still needed 118 homes for these heroes. Since then, we have secured an additional 40 leases for homeless veterans! We've got 78 more to go and only a few weeks left in the year, but with your help we're going to complete this mission." The mayor acknowledged the provision of apartments and rental houses, and raising more than $42,000, and asked for additional donations: "If you have apartments you want to lease to homeless veterans or would like to make your own financial contribution," visit the Austin Community Foundation web site or call the Mayor's Office: (512) 978-2100. – M.K.

• Dammit, Doggett: Quick word of advice to Congressman Lloyd Doggett, D-Austin. If you have to explain your actions twice, then they were probably bad ideas in the first place. The veteran politician was one of 47 Democrats (seven of them from Texas) to vote for House Resolution 4038, the American Security Against Foreign Enemies Act. The bill, a hastily drafted response to last week's terrorist attacks in Paris, places further bureaucratic burdens on people from Iraq and Syria seeking refugee status. Doggett voted for the bill, then released a voting statement in which he called it partisan and divisive, and did nothing more than added extra paperwork to the already slow and laborious refugee system.

Cue the inevitable social media response: if it was such dismal legislation, why vote for it?

Doggett then released a second, longer statement via Burnt Orange Report. In it, he explained that the bill does not demand the refugee restrictions or religious purity tests that some GOPers have requested. "Neither is it a bill that I would have written, nor that I think is necessary. But it is the only related bill on which I was called upon to vote even though presented on short notice, with restricted debate, and with no chance for amendment." So, still clear as mud.

He then explained that he had initially intended to speak against the bill, but changed his position when the Obama administration failed to answer his questions about ensuring that all applicants for refugee status had been sufficiently screened. Instead, he wrote, "I only heard excuses for not being held accountable both to my questions and to those of a number of other colleagues."

His vote may simply have been electoral posturing, to ensure that he doesn't get painted as weak on terror by Republicans (or, potentially, a Democratic primary challenger). Moreover, he may be able to have his cake and eat it. With the bill looking unlikely to pass the Senate, and the president threatening a veto, Doggett's vote may not change the law. Yet he has seemingly positioned himself as an anti-Obama, pro-security Democrat who can outwit the GOP. – Richard Whittaker

• Who Needs Experts?: In a blow for those who enjoy accuracy, last Wednesday the Texas State Board of Education – infamous for its manipulation of historical fact – rejected a proposal offered up by moderate Republican Thomas Ratliff of Mount Pleasant that would ensure textbooks get reviewed and fact-checked by a panel of university professors. The SBOE's current process only involves checking whether or not the books meet the state's curriculum standards. Citizen review panels in place today do report individual errors but fail to take a comprehensive approach. Then, on Friday, the SBOE doubled up its efforts by voting down another proposal, this one from member Erika Beltran, D-Dallas, that would have made sure at least the majority of those citizen reviewers meet certain education and teaching experience criteria.

Both plans appear to be sorely needed – the SBOE came under fire earlier this fall when a Pearland mom discovered her son's world geography textbook referred to African slaves as immigrant "workers." (The publisher later apologized and vowed to correct the text.) The board has also drawn heavy criticism for its inaccurate and politicized passages related to global warming, Islam, the Civil War, and the nation's founding.

"With all the controversies that have made textbook adoptions in Texas look like a clown show, it's mindboggling and downright embarrassing that the board voted this down," said Kathy Miller, president of education watchdog Texas Freedom Network. "Instead of appointing qualified historians, scientists and mathematicians to review proposed textbooks for accuracy, board members are leaving it up to schoolchildren to do the fact checking." – Mary Tuma

• Disaster Declaration: On Friday, Nov. 20, Gov. Abbott declared a state of disaster in 15 Texas counties, including Travis and Hays, for the flooding that occurred in the last two weeks of October. The state declaration is the first step in engaging the Federal Emergency Management Agency to consider its own disaster declaration, which would enable residents affected by the floods (many in Southeast Austin and Travis County) to apply for grants and loans to rebuild or relocate (Abbott's declaration was accompanied by a letter to President Obama requesting a federal disaster declaration). Abbott released a statement, saying in part: "The flooding that occurred this past October throughout the state forever changed many Texans' lives. Declaring a disaster in the Lone Star State may allow affected citizens across the state to gain access to the resources they need in order to start rebuilding their lives." – M.K.