City Council looks headed to another late evening, after several hours debating “accessory dwelling units.” Should be easier to build a granny flat in your sideyard … but you might need a Homeland Security check on prospective tenants, if D6 Council Member Don Zimmerman has his way. We’ll have more of ADUs (and other housing matters) in due course, but that ongoing debate might be overshadowed for a while by a sudden eruption on the dais of the national immigration debate. Although it didn’t hit the meeting today, CM Zimmerman posted to the Council message board a resolution supporting Gov. Greg Abbott’s ban on admitting Syrian refugees to Texas. The resolution cites Abbott’s letter to President Obama refusing to participate in Texas resettlement of Syrian refugees, and then proposes: “1) the City Manager is directed to fully comply with the sentiments expressed in Governor Abbott’s November 16, 2015, letter to President Obama; and 2) City agencies and departments are not permitted to take any action, or to expend any city funds, which would facilitate the resettlement of Syrian ‘refugees’ within the jurisdiction of the City of Austin, Texas.”

In statements to the Statesman's Andra Lim, other Council members were quick to reject the resolution in advance of any consideration. (Zimmerman plans to first introduce it at the Nov. 30 Council Public Safety Committee, which he chairs.) Mayor Steve Adler noted that Austin welcomed both refugees from Katrina and the “Border Kids” from Mexico and Central America, adding, “Helping those in need and ensuring the safety of Austinites are not mutually exclusive goals.” CM Casar and District 3 CM Sabino Renteria expressed similar sentiments.

Zimmerman likely knows he can’t convince a Council majority to vote for such action – he might not even get a co-sponsor, and he needs three to get it posted on a Council agenda – but he can invite public testimony in committee, gin up more anti-refugee sentiment, and keep the wedge issue burning for at least a couple more weeks.

In the hysteria and xenophobia following the Paris attacks last week – in which, as it turns out, no Syrians apparently took part – Zimmerman is hardly alone. In a surprise for local Democrats, longtime Austin Congressman Lloyd Doggett joined 46 other House Democrats (and all but two Republicans, 289-137) voting to approve a House bill that would require more stringent documentations of refugees from Syria – despite a presidential veto threat. The bill now moves to the Senate. 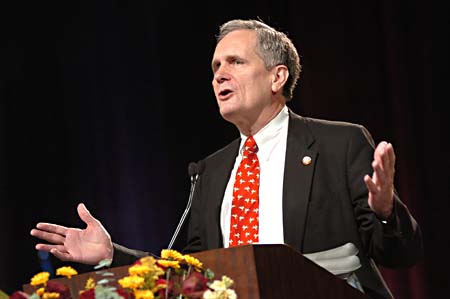 In voting for the bill, Doggett issued a strangely ambiguous statement, denouncing the bill’s intentions but arguing that all it does is require more documentation of what is already being done in reviewing refugee backgrounds. “Instead of working together to make our families safer,” Doggett said, “this partisan four-page bill divides. Fortunately, it does not halt the refugee resettlement program – it simply requires bureaucrats to file more reports and sign more papers. I voted for it asking the Administration to certify that each person admitted through the thorough, existing process actually poses no security risk. Republicans should reverse course and join us to address genuine challenges, instead of blameless victims fleeing violence in Syria.”

In other actions, as of 8pm Thursday, Council:

• After much opposition from CM Zimmerman on selecting a particular nonprofit to “make city policy” – a characterization strongly rejected by CM Kitchen, chair of the Mobility Committee – approved a co-development agreement with the Rocky Mountain Institute for a multi-year “mobility transformation” program, aimed at multi-modal mobility.

• Approved free swimming passes for all city residents 80 years or older (some Council members had objected to the current practice of awarding free passes to particular residents honored for their advocacy of parks or pools).

• For more on City Council, follow the Daily News and next week’s (early Thanksgiving) print edition.