Fight for $15 Gains Momentum in Austin

Last week, fast food workers across the country took part in a Fight for $15-organized strike, demanding a $15 per hour minimum wage and the right to form a union without retaliation. Thousands of workers in hundreds of cities participated, but here in Austin, the numbers were much more modest: Workers from only four area stores (two Taco Bell locations, one Church’s Chicken, and In-N-Out) participated. At a rally at City Hall the day of the strike, the number of striking workers was heavily outweighed by their supporters. Although the movement in Austin is nascent, low wages are a real problem in Austin, where state law prohibits any local ordinance raising the minimum wage, and the cost of living rises regardless. Among the Austin workers who participated in the strike, enthusiasm for change is palpable. Ashley Salazar first learned about the Fight for $15 a week before the strike, when local Fight for $15 organizer Brad Crowder visited the store to recruit workers to participate. Salazar, 25, has worked for about a year as a shift leader at the Church’s Chicken on Manchaca and William Cannon, where she started out making $10.50 per hour. She now makes $10.65 per hour. Because her store is understaffed, Salazar winds up working about 45-50 hours per week. She and girlfriend Rosalynda Frias, who makes $10.40 per hour working at Brookside Senior Living, find it difficult to make ends meet for themselves and their two young children. 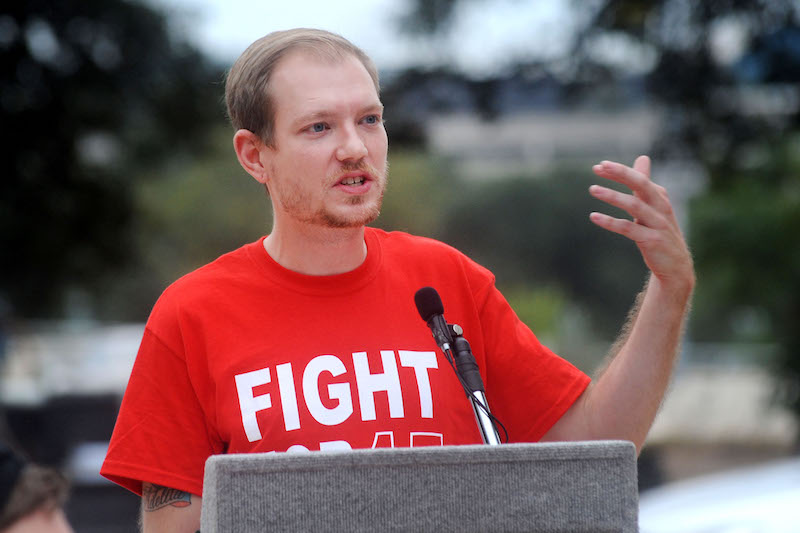 Crowder’s visit was “perfect timing,” says Salazar, because she’d been feeling frustrated about her low pay and the inadequate staffing. She knows she’s not the only employee who struggles to make a living: One employee brings her kids to work with her sometimes; they sit in the dining room while she works because she’s unable to afford childcare.

On the day of the strike, Salazar visited her store and encouraged other employees who were contemplating to go on strike to go ahead and do it. The store was forced to close for lack of staff.

Now that the strike’s over, Salazar wants to keep fighting. She’s spreading the word, telling anyone she knows in fast food about the Fight for $15 campaign. She’s willing to keep going on strike until she’s making more money. For his part, Crowder says that “the strikes will continue, but the question of politics is becoming more and more central to the struggle.”

When asked why she continues to work in fast food, considering the low pay, Salazar says, “I’m glad you asked that. I enjoy doing what I do. I love working in food. That’s what I desire to do. If there were other [fast food restaurants] that paid a lot more money, I’d work there.”