All This and Zoning Too

Adjourning at just about 2:30 a.m. Friday morning, Thursday’s City Council meeting didn’t feature music or proclamations, but just about everything else: a moratorium on short-term rentals, new contracts for major Austin Energy customers, an initiative to help tenants displaced by development … and several dozen zoning cases. 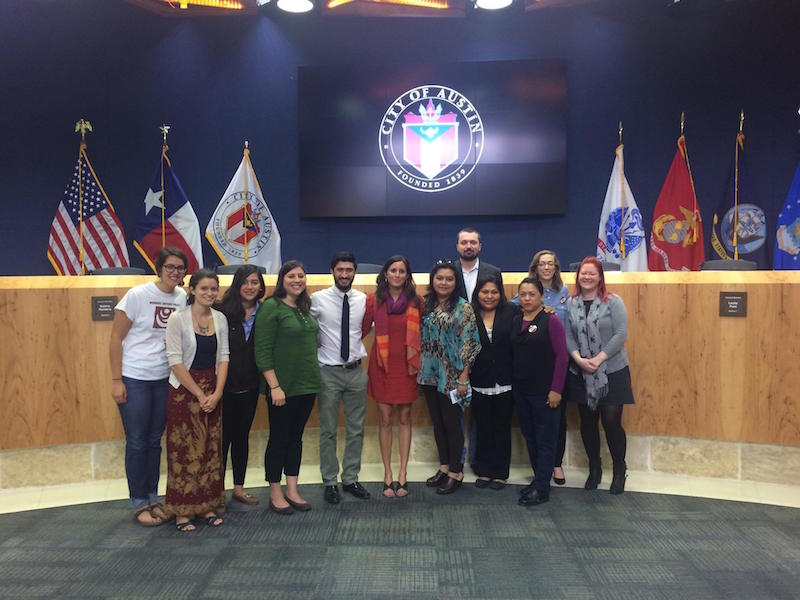 Thursday’s agenda was nominally dedicated to the lingering zoning agenda – the 10-1 Council’s attempt to segregate those localized but often highly contentious land use matters from broader policy issues – but enough of the latter were pending to precede and interweave the roughly 40 neighborhood zoning cases, and prolong matters long into the night and next day.

The following are highlights and a few notes concerning yesterday’s actions, as Council:

• Managed to squeeze in a proclamation, before the meeting formally began. In the morning, prior to gaveling in, they honored Cristina Tzintzún for her decade of stewardship of the Workers Defense Project and the organization’s support and defense of workers’ rights. (District 4 Council Member Greg Casar is a former WDP organizer and spokesman, and performed the honors.) Tzintzún is moving on to national struggles; thank her and wish her well at her farewell party, Saturday evening, 7-9 p.m. at the Workers Defense Project building, 5604 Manor Road.

• Adopted a new “P4 Tariff” for two major AE customers (Samsung and Freescale), after an executive session briefing – details were confidential for competitive reasons, but tariff was said to provide long-term pricing stability for both utility and the companies.

• Passed (after midnight and some 90 minutes of pro-and-con testimony) the anticipated one-year moratorium on new Type 2 (non-owner-occupied) short-term rentals. In the interim, staff is developing additional regulations – which could include a phase-out of all Type 2 STR’s in residential districts, a change advocated by some neighborhood associations but fiercely opposed by current owners as well as rental-brokering companies like HomeAway and AirBnB.

• Authorized, over opposition from D6 CM Don Zimmerman, acceptance of federal grants for economic exchange and development programs with small business entrepreneurs in Pakistan. Zimmerman cited the federal debt and what he considers lack of adequate “performance metrics” for the city’s programs.

• Extended an ongoing city program with Capital Metro for discounted bulk purchase of transit passes for city employees, a benefit that also incentivizes use of mass transit and fewer vehicle trips.

• Approved dozens of zoning applications, many on first or second reading only, while postponing a number of others … and so to be seen again.

For more on these and other Council decisions, and previews of next week’s (Nov. 19) meeting, follow the Daily News and next week’s print edition.