Today, Nov. 10, fast food workers across the country will go on strike as part of the Fight for $15, demanding a $15 per hour minimum wage and the right to form a union without retaliation. 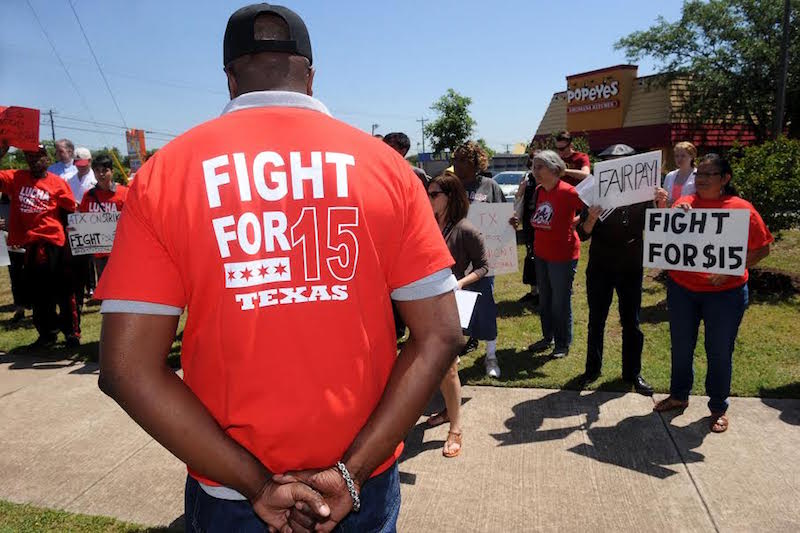 Protesters gathered at the intersection of MLK and Airport May 15, 2014 as part of a previous Fight for $15 action. (Photo by John Anderson)

Here in Austin, Alfreda Lacy, who has worked at a local Taco Bell for the past three years, is among the workers taking part in the strike. Lacy, who is 32, relocated from Galveston after Hurricane Ike hit the city in 2008. She says she struggles to support her four children on her current income of $9.20 per hour at 39 hours per week (the scheduling of hourly employees for 39 hours each week rather than 40 is a common strategy used by businesses eager to avoid paying their workers even a minute of overtime). A single parent, Lacy says she makes too much to qualify for the Texas Supplemental Nutrition Assistance Program (SNAP) or Temporary Assistance for Needy Families (TANF). The only governmental assistance she receives is Medicaid for her children. She pays $45 every two weeks for her own health insurance. “I’m overworked and underpaid,” says Lacy. If she made more money, she would use it to spend more time with her children. Like many low wage employees, Lacy can’t afford to take any time off, because she lives paycheck to paycheck. “I’m just breaking even. I would like to be able to comfortably take care of my family.”

Although the Fight for $15 has seen robust support in cities like New York and Chicago, locally it has yet to attract large numbers. Austin area organizer Bradley Crowder says he believes that today’s strike will demonstrate that workers can advocate for better labor standards without losing their jobs. The National Labor Relations Act protects the right of employees to strike while retaining their jobs in certain instances, including when their employer has engaged in “unfair labor practices” (under federal law, unfair labor practices involve certain acts that interfere or attempt to interfere with a worker’s right to organize). All of the workers taking part in today’s strike belong to companies that have had unfair labor practice complaints filed against them, and so are protected under federal law from retaliation by their employers. (In order to take part in a ULP strike, a worker need not be employed at the branch of the company where a ULP complaint has been filed; workers throughout the company are allowed to participate.)

The local Fight for $15 has also sought to position the campaign for higher wages as part of a larger civil rights movement; the Facebook event page for the Austin strike says, “The workers of Austin demand a living wage, union rights, and accountability for the killer of Larry Jackson Jr., an unarmed black man gunned down by APD officer and Federal Agent Charles Kleinert.” In addition to the strike itself, a rally is planned at City Hall at 4:30pm. Speakers include Lacy, Crowder, District 4 Council Member Greg Casar, Education Austin Vice President Montserrat Garibay, Taylor Chase of the Revolutionary Alliance of Trans People Against Capitalism, and Mike King of the International Brotherhood of Electrical Workers.