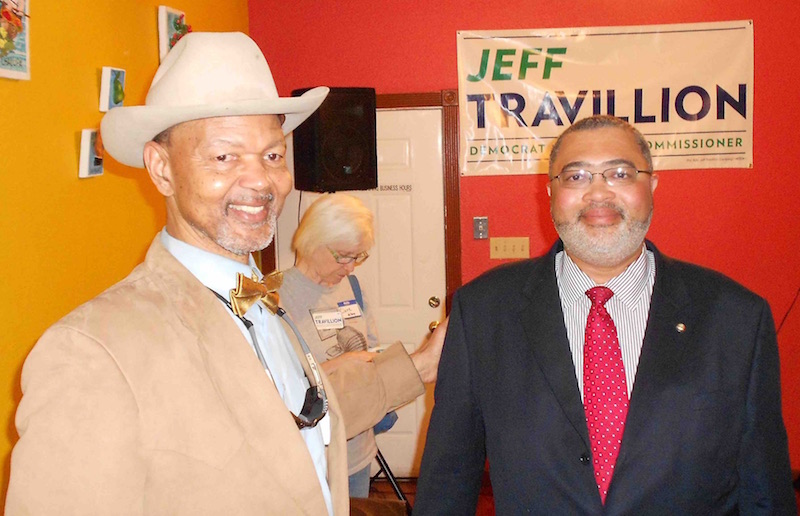 Speaking briefly to a group of about 40 people, Travillion began by remarking on how quickly Austin is changing (the rush-hour transformation of Manor Road outside the restaurant offered plenty of evidence), and that it means Austinites, particularly in the northeast region of Precinct 1, need to fight “to keep what we came here for”; he specifically cited defending neighborhood integrity against overwhelming development. He then shifted to the three issues that he has already been emphasizing on the campaign trail: health care, transportation, and youth development.

On health care, Travillion said he would work to improve the “financial structures” that provide “adequate access” to care for Travis County residents. On transportation, he said he would “make sure that northeast Austin gets its fair share” of infrastructure spending, and more specifically work to improve “mass transit services for the northeast.”

Travillion addressed youth development via education at more length, promising he would emphasize enrichment programs for Title I schools – that is, schools with a majority of disadvantaged students eligible for reduced-price lunches (the current standard for schools needing special attention for at-risk students). Travillion is advocating Monday through Thursday afterschool homework centers for those schools, as well as work-based learning opportunities for students who need to supplement family incomes with their own employment.

Promising his “door will always be open” to Precinct 1 constituents, Travillion asked the group to join with him in working for his nomination to Commissioners Court in the Democratic Primary next March.

Travillion was introduced first by his pastor, who provided an invocation, and then by Gary Bledsoe, longtime civil rights activist and attorney and president of the Texas NAACP. Travillion led the Austin branch (1992-1997), and is currently the communications director for the state organization. Bledsoe called Travillion a “true policy wonk,” who duly works to “know, study, and understand” community issues, but said he “doesn’t like to toot his own horn.” Accordingly, Bledsoe took a bit more time than the candidate in describing his credentials, his history with the NAACP, and his ability to “fight with one hand” while maintaining civil relationships with the other. Bledsoe noted Travillion’s work on developing African-American curricula for public schools, his research work on racial bias in Texas, and his testimony in the Texas lawsuits defending the federal Voting Rights Act when the Legislature violated the VRA by gerrymandering black and Latino voters out of their home congressional districts, including in Travis County. Travillion prepared his own testimony, said Bledsoe, and “was absolutely eloquent” in successfully defending the VRA on the witness stand.

Bledsoe also described the Precinct 1 election as historically important in finding a successor to incumbent Davis. He called the decision akin to the historic debates between W.E.B. Du Bois and Booker T. Washington over the best path toward racial progress. (Washington argued for gradualism and economic development, Du Bois for forthright agitation for racial equality and civil rights). The NAACP grew out of the Du Bois wing of that controversy (Du Bois was a founder).

Bledsoe did not elaborate on the comparison, but was asked afterwards: presuming he believes Travillion represents the Du Bois political tradition, which candidate was he suggesting represents Washington? He smiled and declined to answer.

There were a handful of other candidates in attendance, recognized by Travillion: Gary Cobb (running for Travis County district attorney – campaign temporarily suspended due to the recent death of his 13-year-old son, Kenan); attorney Brad Urrutia (450th District Court); Rick Schumacher (Constable, Pct. 1). Also among the supporters were AFSCME’s Jack Kirfman, and Dave Butts and Mykle Tomlinson of Travillion’s campaign team.

Travillion is currently a division manager in the city's Code Department (working on the Restore Rundberg project). He joins attorney James Nortey, education nonprofit president Richard Franklin, and retired city project coordinator Arthur Sampson in formally declaring for the Precinct 1 seat. The filing deadline for the March primaries is Dec. 14 – so it is possible that other candidates may appear – but these four currently remain the publicly declared candidates.