Council: Taking It to Committee 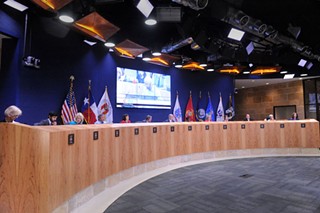 City Council is on a mini-hiatus, of sorts, with the next regularly scheduled meeting not to take place until Nov. 12 – not quite a month’s worth of lonely Thursdays.

Nevertheless, the work goes on – primarily in council committee meetings, of which there are several this week and next – and the shadow of a Statesman story concerning whether the new committee system was achieving its declared purposes of making Council both more deliberative and more efficient. (The members might have come to a consensus on that matter by now, but they were too busy attending committee meetings.) The takeaway from Andra Lim’s Statesman report is that council members have spent nearly twice as much time in meetings as the previous council (664 hours to 337, Jan. to Sept.), including both committee meetings and regular council sessions that have recently resumed their historic habit of lingering long into Thursday evenings or Friday mornings – supposedly to be eliminated by the new system. And less obvious in that calculation is how many additional hours department heads have spent cooling their heels waiting to be summoned for questions, and staff members have spent servicing all those meetings. At any rate, recent full council meetings have generated considerable pending business and a phalanx of marching acronyms: TNCs, STRs, ADUs, SXSW, etc. So it’s a good moment to summarize where things stand on those questions, and what’s likely to happen next.

• Transportation Network Companies: At the Oct. 15 meeting, Council took the first steps toward more consistent regulation of TNCs (aka “ride-for-hire” firms, primarily Uber and Lyft), with Mobility Committee Chair Ann Kitchen (District 5) laying out regs that would, to a degree, level the working field between the TNC amateur cabbies and real ones. Under the proposed rules, TNCs (like local cab firms) would pay annual administrative fees to the city (either per car or a percentage of gross revenues), and drivers would be subject to background and fingerprint checks, as are local cab drivers. TNC spokesmen have balked at the restrictions, threatening to leave town – to which Kitchen responded that threats should not determine city policy, and public safety shouldn’t be sacrificed to corporate convenience. The companies insist their own background investigations are sufficient (despite testimony from SafePlace of several women assaulted by “ride-share” drivers), and they have both Council and public allies.

• Short-Term Rentals: This question is even more polarizing than TNCs, as it has pitted traditional central city neighborhood associations against property owners who are either maintaining their homesteads or earning an income from in-neighborhood rentals. The two sides cannot agree on the number of “bad actors” (which appear to be concentrated in a few neighborhoods) or even on the number of STRs citywide (extravagant estimates from unconfirmed online postings contradict both the city’s 3% rule for census tracts and the number of registered listings). Based on recent Council discussions, the dais wind appears to be moving against STRs, led by Mayor Pro Tem Kathie Tovo, whose proposed regs (passed to staff for development Oct. 15) would cap current Type 2 (non-owner-occupied) STRs, strictly limit their size and uses, and eventually phase them out from single-family zoning altogether. Although Council votes have been divided on the question, and the regs (when formally drafted) have to move through commissions and committees again – and STRs also have national corporate defenders like HomeAway and Airbnb – right now the political momentum is against the free-range rental market.

• Accessory Dwelling Units: ADUs have been somewhat lumped together with STRs because they are sometimes used as such by homeowners, although in theory they should be mostly Type 1’s (owner-occupied). They have been opposed more often because of NA demands for dedicated on-street parking (which often defeats the purpose of the ADU altogether), although you would think in 2015 central city neighborhoods in “progressive” Austin would be looking for ways not to incentivize and subsidize automobiles. You would be wrong; nevertheless, Council has been more welcoming to ADUs, adjusting regs to make them less restricted and less expensive.

• SXSW: Resurfacing in the Public Safety Committee this week was the annual question of how best to manage the crowd-heavy weeks of the film, interactive, music, etc. festival. This week Austin Police Association reps suggested more money for police overtime (SXSW and other festivals do underwrite plenty of policing, but the perennial argument is over how much is enough, and who should pay for policing non-festival gatherings). The city has moved to limit the sheer number of non-festival events, but the APA insists they remain a strain on police resources – and suggested any end-of-year department “surplus” be rolled into festival overtime rather than returned to the General Fund.

• Campaign finance: Audit and Finance Committee is discussing additional disclosure for “dark money,” as well as tighter definitions and regulations of “lobbyists.”