In this week's News Roundup: Don Zimmerman and others continue their last-minute campaign against the proposed courthouse location; early voting this past weekend showed embarrassingly low turnout rates; Ken Paxton is suing the federal government (again); and more. 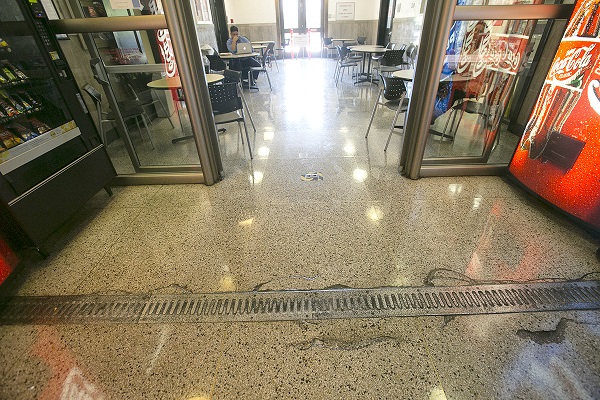 • RECA Don't Like It: Last week the Real Estate Council of Austin joined the 11th-hour Tea Party chorus in opposing the current Travis County bond proposition for a new Civil & Family Courthouse Complex, arguing that the RECA leadership "does not question the need" for a new courthouse, "but does question the proposed location," in part because RECA would prefer private development on the proposed site. At some length, the RECA press release questions taking valuable Downtown land (Fourth and Guadalupe, owned by the County) "off the tax roll," and cites unidentified "alternative sites … outside the Downtown core" that RECA claims would be cheaper or more suitable for courthouse facilities. President Ward Tisdale, who signed the release, does not say where RECA's facility experts were during a decade of County planning, nor during the last year of broad public input into the plan — RECA simply opposes the bond and supports (following defeat) "looking into alternative locations."

In a response, Courthouse campaign spokeswoman Genevieve Van Cleve said in part: "The purpose of the building is to serve victims of family violence, abused children, widows and widowers, and businesses that are trying to peaceably resolve disputes. … Not every decision we make, as a community, can or should be based on a few rich people getting richer. Downtown doesn't exist just to entertain people of means. Travis County residents have endured a Courthouse that is a cramped, leaking wreck for decades. RECA's last minute pitch is short-sighted and self serving. …"

• Get Off Your Duffs!: Whatever the pros and cons of the Courthouse question – and the seven state constitutional amendments also on the Travis County ballot – county voters are once again showing their persistent lack of enthusiasm for participating in the democratic process. Through Saturday, Oct. 24, a whopping total of 10,528 people had taken advantage of early voting – or 1.63% of just under 645,000 registered voters. Perhaps there will be a mad rush to the polls over the next week (early voting continues through Oct. 30), or the rest of the hundreds of thousands are waiting for election day, Nov. 3. You can find more information about what’s on the ballot here. The Chronicle's endorsements are available here. And more information about polling places etc. is available here. There, we made it even easier for you. If you don't vote now, you can designate yourself a non-citizen of your community. – M.K.

• Weekend Downpour: Heavy rain – a side effect of the conditions that led to Hurricane Patricia – pelted Central Texas across the weekend. According to the Lower Colorado River Authority, the region saw upwards of three inches of precipitation, Friday through Sunday, with areas of Northwest Austin and Cedar Park seeing 10 inches. However, there was nowhere near the levels of catastrophic flooding seen across Memorial Day weekend, when high creeks caused massive damage across central Austin, and devastated communities in San Marcos. In fact, both of the weekend's big sporting events, UT vs. Kansas State, and the Formula One US Grand Prix, both went ahead (although the F1 race had to delay Saturday's qualifying round until Sunday).

The deluge rain also helped combat the Hidden Pines Fire in Bastrop County. The fire is now 100% contained after burning for 12 days. However, authorities are now concerned that, without tree roots and brush to hold the soil together, runoff from the heavy rain could lead to dramatic soil erosion. – Richard Whittaker

• Paxton vs. Everyone: Former Texas Attorney General Greg Abbott once semi-joked that his job was to sue the Obama administration. It seems like his successor, Ken Paxton, is following in his footsteps. This week Paxton filed not one but two lawsuits against the Federal government: first, over a fee paid by private insurers under the Affordable Care Act, then as part of a 24-state coalition protesting the Environmental Protection Agency's clean power plan. These are his fourth and fifth suits against D.C., having already sued the EPA over water and air rules, and the U.S. Department of Labor over same-sex spouse benefits.

However, these suits come as Texas Lawyer reports that Paxton will not fulfill some duties of his office, due to his ongoing criminal indictments (see Paxton Indicted on Three Felony Counts, Aug. 1). Since September, Paxton has officially recused himself from any and all official duties involving the State Securities Board, the Texas Ethics Commission, and his private criminal lawyers. Renewing calls for Paxton to stand down, Texas Democratic Party Deputy Executive Director Manny Garcia said, "Last I checked, regular Texans aren’t getting paid full-time wages for only part-time work." – R.W.

• News of the Weirder: The story of District 6 Council Member Don Zimmerman's stolen pickup truck only got stranger after the initial reports. On Friday evening, Oct. 16, Zimmerman was posting Travis County Taxpayers Union campaign signs opposing the courthouse bond on East SH 71 near the airport – a public servant's work is never done – when someone drove off with his truck, which he had parked behind him with the motor running. The truck was quickly recovered and returned, because the man who stole it – whom police described in the arrest affidavit as appearing "mentally unstable" – turned up at his girlfriend's house off Hwy. 183. She called the police because of the unknown vehicle and his strange behavior, including apparently killing her cat by slamming it to the ground. When police arrived and arrested him, suspect Montrel Rogers claimed that Zimmerman had given him a "thumbs up" when he approached the truck on foot, presumably permission to take the vehicle. Rogers was arrested and jailed on $12,000 bond; police returned to Zimmerman his vehicle, his cell phone, and the unsecured handgun in the glove box. Zimmerman told the Statesman later: "It's always the people who aren't very smart who get caught." – M.K.

• Chutzpah, Thy Name is Ryan: The ongoing Republican fight over who will be the next speaker of the U.S. House of Representatives has quickly become a game of hot potato, with candidates withdrawing as fast as their names are offered. Now Rep. Paul Ryan, R-Wis., has said he will consider taking the gig, but only if it doesn't damage his home life. Last Tuesday, he told reporters “I cannot and I will not give up my family time." Cue gasps of astonishment from workers' right advocates, who quickly pointed out how often Ryan has voted against family leave. That includes the 2009 Federal Employees Paid Parental Leave Act, allowing federal workers to use up to four weeks of available paid leave as parental leave. Ryan has also prevented his House Ways and Mean Committee from taking up two bills relating to leave this year; one guaranteeing seven days of paid sick leave for businesses with 15 or more workers, and a second establishing a national paid family and medical leave insurance program.

Quick reminder: The U.S. is the only developed nation that does not guarantee vacation time, while many other countries also have legislation ensuring maternity and sick leave. More worryingly, even those that get vacation time don't always use it: According to a 2014 survey by Harris Interactive for Glassdoor, 15% of respondents who received paid time off took none in the 12 months prior to being questioned; 40% took less than 25% of their allotment; and only in one in four reported using all the time they had earned. – R.W.