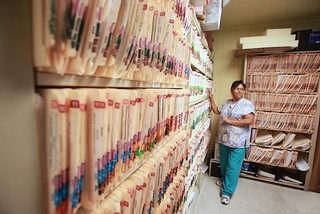 In a raid this week, state officials requested thousands of Planned Parenthood documents from the provider as part of their ongoing anti-choice campaign to dismantle the reproductive health care clinics. (Photo by Jana Birchum)

Serving the clinics with subpoenas, officials have asked for, among other documentation, patient records, personal clinical notes, nurses’ notes, and lab results from 2010 to the present. They’ve also requested personal information on all PP employees, including salaries, home addresses, and phone numbers. While Planned Parenthood was given an initial 24 hour deadline, the provider asked and was granted an extension until Friday, Oct. 31. If they do not comply, the state writes it may “impose sanctions” on the health care provider.

Through an additional two subpoenas, the HHSC OIG staff has demanded Planned Parenthood of Greater Texas (which includes three clinics in Austin; one of those is an abortion facility) provide information on fetal tissue donation for research purposes, following the release of highly edited, discredited undercover videos. In a statement, PPGT reiterates it “does not participate in life-saving fetal medical research programs” and has responded to the request already.

Officials claim they are within their right to inspect the files, alluding to suspicion of Medicaid fraud. However, they have yet to offer any concrete evidence backing up those claims. During a press conference in Austin yesterday afternoon, Lambrecht said there is “absolutely not” any truth to the allegations and that the surprise investigation amounts to a politically motivated “fishing expedition.” As for any charges that PP misspent Medicaid dollars on abortion care, Lambrecht said, “Not one dime of governmental funds goes to subsidize safe, legal abortion at Planned Parenthood in the state of Texas.”

The raid is part of the state’s ongoing anti-choice quest to shut down Planned Parenthood clinics. On Monday, Gov. Greg Abbott announced the state would deny PP participation in the Medicaid program, just one of the several attempts in recent years to block the reproductive health centers from providing care.

Roughly 13,000 patients in Texas received Medicaid services at Planned Parenthood in 2014, according to the provider. If the state is successful in their effort to deny PP patients Medicaid coverage, they will prevent thousands of low-income women from accessing preventive health care, including breast exams, HIV testing, and cervical cancer screening.

A lawsuit may be on the horizon: Lambrecht said the local providers are consulting with their attorneys and the PP national organization to protect Medicaid access and working actively to “seek every legal recourse" to ensure patient and employee privacy.