Let the Sun Shine In!

City Council has given itself a few weeks off – next regular meeting Nov. 12. Considering last week’s marathon (adjournment just before 2am), the break is understandable. They also accomplished plenty, from ABIA to ADUs – but the headline items were more solar power and more power for women’s health care. 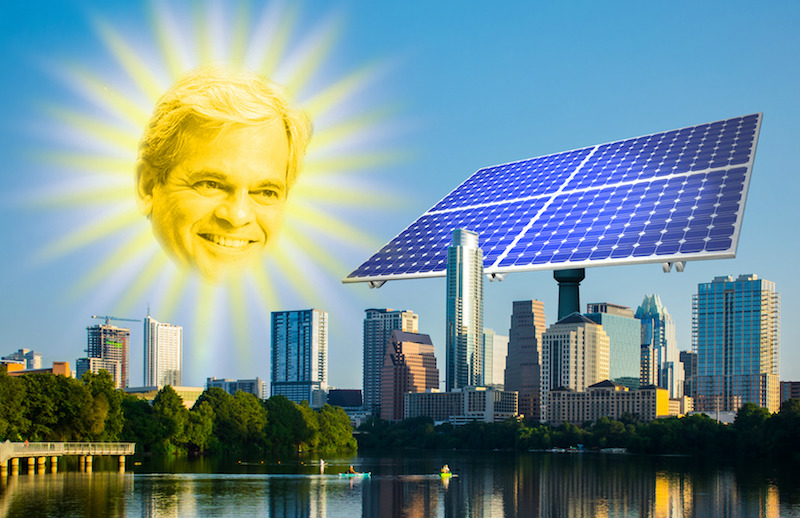 Council has a cleanup special called meeting Thursday (Oct. 22) (primarily to permit a temp smoking area at Fun Fun Fun Fest), although that’s a little misleading because it will be followed by an Austin Energy Oversight Committee meeting – that is, a committee of the whole Council, so they won’t entirely skip work Thursday. Moreover, there will be plenty of other committee meetings between now and mid-November, so the work goes on.

Nevertheless, the Oct. 15 meeting was unusual for its length and workload. A morning discussion eventually approved a nearly $300 million expansion of Austin-Bergstrom International Airport – airport planners acknowledged they had enlarged the plans beyond an earlier somewhat lower request – sufficient to expand capacity to 15 million passengers a year from the current (already exceeded) 11 million capacity. The blow was softened considerably in that as an enterprise department, ABIA essentially pays its own bills (supplemented in this case by Federal Aviation Administration grants), so that if its income is in balance, Council generally doesn’t quibble much about the cost. A couple of members thought the high-dollar matter should go to committee on principle, and District 3 Council Member Sabino Renteria complained that some airline subcontractors are not paying living wages. That question – how to address working conditions under subcontractors with whom the city has no direct contractual relationship –

Much of the rest of the morning was devoted to Austin Energy and solar power. Council had previously endorsed the purchase of nearly 300 new megawatts of solar power, and Thursday’s question was, should it go to 600 MW? Prices have steadily declined, and AE was urging moderation – should prices continue to drop, would the city regret buying higher than necessary? Opinion was divided among solar advocates: Michael Osborne of the Electric Utility Commission argued that the contracts are affordable “from day one,” while Cyrus Reed of the Sierra Club thought making haste slowly might be the better strategy – and a couple of business witnesses argued that even a slight hike in current rates could cost local companies millions.

So there was no easy algorithm available, with any effect on rates not likely to be substantial but still uncertain. That prompted a fairly extraordinary oration from Mayor Steve Adler – quiet as a TV golf commentator, but clocking in at nearly half an hour – running through the city’s options, and eventually proposing a middle ground, enough to get the total up to 450 MW (including the previous contracts), holding any rate impact to 1 percent or less, with the intention of moving to 600 MW of solar power online by the end of 2019 (including the possibility of the city adding another solar array of its own). After extensive discussion, the mayor’s amendment eventually won the day on an 8-2-1 vote – D6 CM Don Zimmerman and D8 CM Ellen Troxclair opposing, and Renteria abstaining after announcing he would be adding solar to his own home and couldn’t therefore vote to raise other residents’ rates.

Despite the dissension on volume, the vote pleased solar advocates, who issued a stream of statements approving Council’s action, neatly summarized by the Sierra Club’s Reed: “It is a win for the environment, a win for clean energy, and a win for Austin ratepayers.”

The debate over Planned Parenthood – specifically, a resolution sponsored by D2 CM Delia Garza that would add support for the reproductive health organization to the city’s federal and state lobbying agenda along with “expanding funding of women's access to a full spectrum of health services" – might have seemed largely symbolic, until it was followed this week by Gov. Greg Abbott ordering that Planned Parenthood clinics be excluded from all Medicaid funding (his response to the fraudulent videos produced by anti-abortion advocates masquerading as biomedical researchers hoping to “buy” fetal tissue for research). The videos have been discredited, several investigations (including a Congressional panel) have found no wrongdoing by Planned Parenthood – and Texas clinics do not even collect fetal tissue for research – but that didn’t stop Abbott from pandering to his hard-right base and taking executive action.

In that context, Council’s resolution – over negative votes from Zimmerman and Troxclair – takes on more emotional and political force. A few anti-abortion witnesses complained that Council was making an “immoral and unethical” decision or supporting the “killing of unborn children” – a charge sharply rejected by D7 CM Leslie Pool. But the most moving testimony was provided by Austin ISD trustee Ann Teich, who said not only that she has been a Planned Parenthood supporter for many years, but that she herself had an abortion in 1979, because at 26 years old and newly married, she was neither emotionally nor financially in a position to have a child. “And by the way,” Teich added, “that ‘child’ was a zygote – not a human being.” Teich continued, “I talk to God every night in prayer, and God is perfectly okay with it. …And I haven't told anybody except my immediate family that piece of information, so now the world knows it.”

After that testimony, everything else was pretty much anticlimax, although Garza noted that she had relied on Planned Parenthood care when she was between jobs and without insurance, and two Council members – D1 CM Ora Houston and D3 CM Renteria – each said their daughters had relied on Planned Parenthood for reproductive health care when no other service was available. Houston also summed up the debate in stark and personal terms: “As probably the oldest person sitting on this dais,” she said, “I want everybody to know that it upsets me when men tell me what I can and cannot do with my body. It's not your right and I don't think it's your responsibility to tell me about what I can do with my body.”

The Planned Parenthood vote took place just about 3 p.m., and it would be nearly 11 more hours before Council members could toddle off to bed. In addition to miscellaneous zoning cases and a few annexations, they passed resolutions for staff drafting that would:

• Tighten the regulations on short-term rentals, including the possibility that “Type 2s” (non-owner-occupied STRs) would be phased out of residential areas altogether, with Mayor Pro Tem Kathie Tovo insisting that Type 2’s are “commercial” uses, essentially “mini-hotels” that do not belong in single-family neighborhoods;

• Initiate potential code amendments that would require defined fees from “transportation networking companies” (ride-for-hire firms like Uber and Lyft), and would also require background and fingerprint checks akin to those currently required of taxi drivers.

The proposed new rules on ADUs, density bonuses, STRs, and TNCs will all need to return to Council for further review and potential confirmation. For more Council coverage, follow the Daily News and this week's print edition.