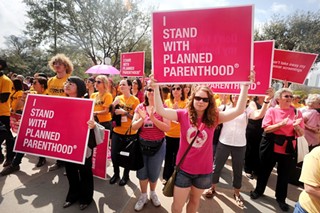 State attacks on Planned Parenthood funding led protestors to rally at the Capitol back in 2011. Today, not much has changed: The state continues to block the health care provider from funding by trying to end their access to Medicaid enrollment. (Photo by John Anderson)

This morning, Governor Greg Abbott announced the state will end Medicaid enrollment for Planned Parenthood and other abortion providers.

Citing “evidence of Medicaid program violations” the Office of Inspector General at the Texas Health and Human Services Commission issued a letter today halting the taxpayer funding stream to PP clinics. The draconian move comes after the release of highly edited videos alleging Planned Parenthood providers profited off the sale of fetal tissue. Filmed by the Center for Medical Progress, an ardent anti-choice group working under false pretenses, the videos have been widely discredited. While seven state investigations into the purported wrongdoing have produced no evidence of illegality, Texas officials continue to use the footage to launch attacks against the provider.

“Texas has stepped forward and shown its unyielding commitment to both protecting life and providing women’s health services,” said Abbott in a statement. “The gruesome harvesting of baby body parts by Planned Parenthood will not be allowed in Texas and the barbaric practice must be brought to an end. As such, ending the Medicaid participation of Planned Parenthood affiliates in the State of Texas is another step in providing greater access to safe healthcare for women while protecting our most vulnerable – the unborn.”

The termination letter from the Office of Inspector General – addressed to Planned Parenthood Gulf Coast – references three “violations” based on undercover video, including altering the timing of abortion to procure fetal tissue and failing to prevent conditions that would spread infectious disease. The OIG also makes a claim that it possesses information “suggesting” fraud at PP clinics across Texas.

State and federal taxpayer funding for abortion services is prohibited in Texas. The exclusion will end up preventing some of the state’s poorest patients from accessing free to low-cost health care, such as birth control, HIV tests, and cancer screenings. And it wouldn’t be the first time low-income Planned Parenthood patients were banned from the provider: In 2012, the state kicked PP and some 50,000 patients out of the Medicaid-based Women’s Health Program, resulting in a significant decline of participation. This past legislative session they ramped up efforts again by booting the provider from a life-saving breast and cervical cancer program. Both decisions were openly motivated by anti-choice politics.

But will the bold order hold up? A similar attempt made by conservative Louisiana Gov. Bobby Jindal was temporarily halted by a federal district judge, according to an Associated Press report this morning. U.S. District Judge John deGravelles ordered the state to continue enrolling Planned Parenthood in Medicaid for 14 more days. Additionally the 7th and 9th Circuit Courts have struck down state laws that push abortion providers out from Medicaid.

And it's possible the federal government could step in, as they have before. When state officials excluded PP from the Women's Health Program, the Centers for Medicare and Medicaid intervened, arguing the decision wouldn't pass legal muster. "Medicaid programs may not exclude qualified health care providers from providing services that are funded under the program because of a provider's scope of practice," CMS wrote. Eventually, the feds pulled 90% or $35 million in 9-1 matching grants from the state program, leaving the state to fend for itself.