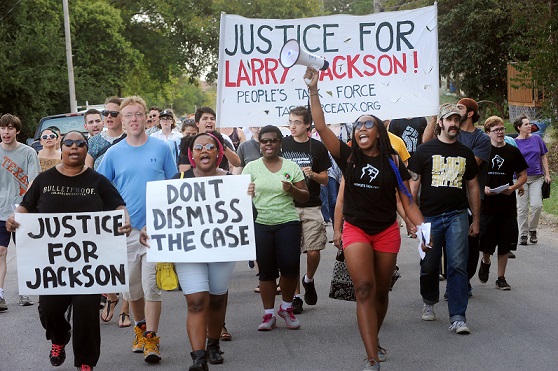 • Kleinert Seeks Immunity: Testimony concluded Friday in the District Court hearing to determine whether charges will be dropped against Charles Kleinert, the former APD detective who shot and killed Larry Jackson Jr., under a Shoal Creek bridge on July 26, 2013. Kleinert, indicted on manslaughter charges in May 2014, attempted to argue through three days of hearings last week that the longtime cop was acting within his charge as a federal officer (Kleinert was working on a federal violent crimes task force at the time of the shooting) and thus should be granted immunity in the case. Kleinert successfully moved the hearings from the state court to the federal arena in April.

At issue last week was the matter of whether or not U.S. District Judge Lee Yeakel believes Kleinert's position that he was acting as a federal agent is enough to toss the case out altogether. Travis County prosecutor Ken Ervin spent the three days arguing that Kleinert was acting beyond the scope of APD policy when he commandeered a ride from a civilian, chased Jackson on foot with his gun in his hand, and eventually engaged in physical combat with the victim. Jackson, who'd come into contact with Kleinert when he tried to enter the Benchmark Bank on 35th Street (closed for the day because of a robbery that occurred there that morning) with false identification, was not under arrest when Kleinert began his pursuit of him. Ervin believes that's enough to justify keeping the case active in Yeakel's court.

Kleinert's attorneys Randy Leavitt and Eric Nichols, however, have argued that the prosecution has overemphasized the relevance of APD policies in pertinence to this particular motion, and failed to consider what they consider the reality: that an officer acting as a member of a federal task force must be granted federal protective immunity in these types of instances.

Yeakel will consider both arguments over the new few weeks. Should he rule against Kleinert, a trial date is currently set for Nov. 2. – Chase Hoffberger

• Will SCOTUS Take Up HB2?: Today, Oct. 5, the U.S. Supreme Court begins its new term and first on the agenda is deciding which other cases to take up, in addition to cases that involve labor unions and affirmative action at the University of Texas. For reproductive health advocates and pro-choice women in Texas, all eyes are on whether or not the high court will deliberate over Whole Woman's Health v. Lakey, the challenge health care providers have mounted against the state's heavily restrictive abortion law, known as House Bill 2. The multi-part law has already succeeded in shutting down half of the state's abortion clinics and placing the procedure out of reach for thousands of low-income women. Providers seek to block two provisions of the law: a rule mandating clinics pay up to millions to transform into hospital-like centers and a requirement that forces doctors to seek admitting privileges at a hospital no further than 30 miles from where the abortion is performed. Legal observers and the plaintiffs themselves are optimistic that SCOTUS will hear their case – they continue to point to the fact justices have stepped in, not once, but twice to block parts of the law. – Mary Tuma

• Planned Parenthood Saves Lives: On Saturday, Oct. 3, District 2 City Council Member Delia Garza published an op-ed defending Planned Parenthood in the Austin American-Statesman, citing her personal experience to emphasize the need for the health care service. Garza said she hesitated to violate her own right to privacy, but continued, "I cannot stand by silently anymore while others politicize decreasing funding for Planned Parenthood." Garza said that when she left her previous employment to run for Council, she was briefly without insurance and relied on Planned Parenthood services – and when they diagnosed a potential problem, she was able to purchase insurance through the Affordable Care Act and receive care that protected her and her child. "The only reason I went to the doctor after I had initial symptoms," Garza wrote, "was because I had an affordable option. I had Planned Parenthood." She thanked Planned Parenthood and urged elected officials "to support women by protecting funding for these lifesaving services." – Michael King

• Testing Times for Texas Schools: Texas Commissioner of Education Michael Williams took a grilling Friday when he attended a session of the annual joint conference of the Texas Association of School Administrators and the Texas Association of School Boards in Austin. Williams has been seen as much more amendable to public engagement than his predecessor Robert Scott, but this was a trip into the lions' den rather than a coffee klatch. After announcing that the state will increase the difficulty of the State of Texas Assessments of Academic Readiness (STAAR) this year, he faced harsh criticism for decisions made by both his office and legislators that have increased testing and reduced funding. Williams' put up some defense of the current high-stakes testing environment, but conceded there is room for improvement. – Richard Whittaker

• Open Is as Open Does: On Thursday, Oct 1, Mike Clark-Madison, chair of the appointed, volunteer City Council Task Force on Community Engagement – an effort to expand citizen participation in city affairs – responded in the Statesman to the daily's Sept. 23 editorial opposing the Council's decision to exempt the Task Force from the Texas Open Meetings Act ("Council sends bad message …"), as damaging governmental "transparency." Clark-Madison pointed out that TOMA actually prevents some forms of public participation, limits the use of online media (including preventing the public from comment on the Task Force message boards), and would require multiple adjournments and reconvenings to allow small group discussions. "The task force is employing technological solutions, making the most of the limited time that we have to do meaningful work and providing alternatives for public participation outside of three-minute speeches," Clark-Madison writes. "These approaches are fundamentally consistent with our charge of rethinking the way that the city of Austin engages with and involves the public in the future." (See also last Monday's Roundup, Sept. 28: "Butterflies, Buffoons, and Bastrop.") – M.K.

• Another Gun Massacre: "This is a political choice that we make to allow this to happen every few months in America," said President Barack Obama following the Oct. 1 gun massacre at Umpqua Community College in Roseburg, Oregon last week. "We collectively are answerable to those families who lose their loved ones because of our inaction. When Americans are killed in mine disasters, we work to make mines safer. When Americans are killed in floods and hurricanes, we make communities safer. When roads are unsafe, we fix them to reduce auto fatalities. We have seatbelt laws because we know it saves lives. So the notion that gun violence is somehow different, that our freedom and our Constitution prohibits any modest regulation of how we use a deadly weapon, when there are law-abiding gun owners all across the country who could hunt and protect their families and do everything they do under such regulations doesn't make sense." Obama called for elected officials to take action to make it more difficult "for somebody who wants to inflict harm on other people to get his or her hands on a gun." And he called on voters to support candidates who will address the epidemic of gun violence. – M.K.

• Gun Violence by the Numbers: The president also called on news media to publish and compare the numbers of Americans killed by "terrorism" to those killed by gun violence, noting, "We spend over a trillion dollars, and pass countless laws, and devote entire agencies to preventing terrorist attacks on our soil, and rightfully so. And yet, we have a Congress that explicitly blocks us from even collecting data on how we could potentially reduce gun deaths." Many media outlets responded to the challenge in various forms. Here’s a chart prepared by CNN for the years 2001-2013: 3,380 deaths from terrorism, 406,496 deaths from gun violence. 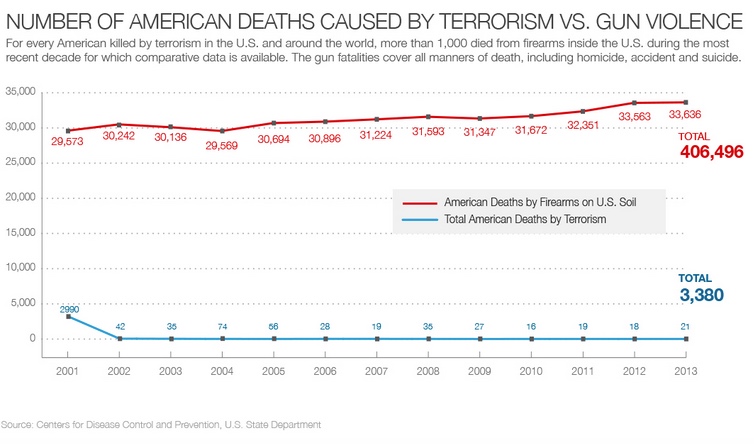 Current numbers provide a snapshot: The Washington Post reported that from 1970-2014, there were 3,521 deaths from terrorism in the United States. In this year, 2015, to date, there have been 9,948 U.S. deaths by gun violence. And mass shootings like the Umpqua incident are not rare: According to the nonprofit Gun Violence Archive, as of last week there had been 256 multiple shooting incidents in the U.S. already this year (four or more people dead or injured). – M.K.

While liberals and progressives have become increasingly cheery about Obamas' domestic legacy, controversy swirls around the seven years he gave Duncan to enact the education reform policies of high-stakes testing and charters. King seems to be a continuation of exactly those policies. A former charter school founder through the Uncommon Schools group, King's tenure as New York State commissioner of education was marked by turmoil and lawsuits. His commitment to the Common Core, and to high-stakes testing for both students and teachers was one of the big inspirations behind a statewide testing boycott. In 2014, he received a no-confidence vote from the board of educator union the New York State United Teacher which asked for his removal.

The NYSUT responded to this new appointment by calling King "an ideologue" and asked its members to call the White House switchboard at 202-456-1414 to express their displeasure. American Federation of Teachers president Randi Weingarten basically called him well-meaning but wrong, adding that his policies were so poor that "even Gov. Andrew Cuomo is finally doing a mea culpa over the obsession with testing."

As for Congressional Republicans, by appointing King as only acting secretary after Duncan's Friday resignation, Oabama effectively did an end-run on the broken nominations process (the one that, admittedly, the Republicans broke). – R.W.