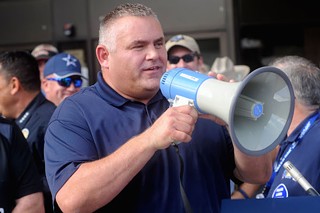 The prospect of body cameras for Austin Police Department officers now imminent, attention turns toward how to implement their installation. On Monday, City Council’s Public Safety Committee met to parse out the range of interests policymakers must consider when sorting out what exactly it will mean for APD officers to absorb the technology.

The PSC took testimony from five stakeholders: Kim Rossmo, chair of the city’s Public Safety Commission; Austin Police Association President Ken Casaday; local NAACP President Nelson Linder; Police Monitor Margo Frasier; and Ely Reyes, commander of APD’s technology unit. Each spoke to a sentiment expressed at the top by Rossmo: “We support the idea, but like any new implementation, they come with potential for unintended consequences.”

Few would argue that equipping APD officers with body cameras (this year’s budget allows for the department to purchase enough inventory and storage space to support cameras on roughly 500 patrol officers) will prove net positive. The question now becomes how to best introduce the technology, and what sorts of policies must be created for their arrival.

Casaday, speaking on behalf of police officers, expressed concerns about activation: when cameras would turn on and what sort of appearances they would possess while in operation. He stressed that officers don’t want a red light to turn on when the cameras are recording, as that may serve as an aggravator for individuals they’re dealing with. He also said that officers need to be unconcerned with whether they’re appropriately activating the cameras’ recording function. “If we can’t have a body camera that opens when the lights and sirens [of a squad car] go on,” the APA won’t be in support, he said. He recommended that the city pay for PSAs to inform the public that they’re now liable to be recorded at any time in which they come into contact with a police officer.

Frasier and Linder agreed that the city needs to develop body camera policies outside of APD’s “silo.” “It’s a community decision,” said Frasier. Together they spoke of the ways in which other cities have seen a reduction in complaints since implementing cameras. Linder stressed that body cameras likely could have prevented serious police accountability dustups of recent past, particularly the Michael Brown shooting in Ferguson.

Rossmo largely agreed with the aforementioned three, adding however that the policies for body cameras need to consider people’s privacy. Police speak with informants and victims “who may be hesitant to talk to police if they know the matter is going to be recorded and possibly released” all the time. “No one wants to see their broken nose on YouTube,” said Rossmo. The city will need to review its open records policies to and consider the challenges being presented with the new technology.

Rossmo also stressed the unforeseen costs associated with body cameras, particularly maintenance, upkeep, and training. He pointed to the police force in Calgary, Canada, a city with a similar population to Austin, and noted how body cameras up there create 2.3 gigabytes of material per hour for every person.

Fortunately for supporters, APD is blessed with a technology commander who’s ready to get to work. Reyes began his six minutes by saying that he was “pretty excited” to finally be having the conversation. He’s hoping to find a way for the cameras to activate whenever a patrolling officer opens the door to his squad car and steps out. “If it’s lights and sirens,” he said, cops “will be recording the steering wheel for a while.” One of the most interesting points made throughout the hour-long discussion came from Reyes, as well. Asked about the cameras’ capability for night vision, the commander expressed an unwillingness to conform. Night vision, he said would give citizens a false perception of what officers can really see. “We want to make it very clear that the image recorded is the same as what officers can see.”

That idea took the conversation into the second half of the discussion, concerning implementation and city policy. Committee Vice Chair Greg Casar stressed that he wanted to ensure that body camera footage wasn’t made available to prosecutors and not defenders, while colleagues Ora Houston and Don Zimmerman emphasized a need for the community to have substantial say in development moving forward. Reyes’ task now is to develop a Request For Proposals – essentially the process of soliciting service requests for body camera vendors – but it appears as though APD and City Council (as well as Rossmo, Linder, and Frasier) are split about how to make that happen. Council members were adamant in their request to have any RFPs come across the dais before going out to vendors, while Reyes and Casaday expressed a desire for those most versed on police practices – the police themselves – to come up with a plan.

“No matter what that policy says, there are going to be different stakeholders who disagree with it,” said Casaday. “You’re not going to make everybody happy. You’re going to have to trust your police department in the end.”