To help fund a production of their latest play, Mothers and Daughters, Conspire Theatre hosts the reigning Austin Music Awards’ Musician of the Year and her Gina Chavez Trio tonight at the All Saint’s Episcopal Church.

Chavez is no stranger to the benefit rounds. She routinely puts on productions of her own to support the nonprofit she started after an eight-month mission trip to El Salvador. The result was Niñas Arriba, established to send a trio of sisters to college.

Chavez is less familiar with the concept of incarceration closer to home, which is why she thinks it so important to support Conspire - which has taught theater and creative writing to women at the Travis County Correctional Complex since 2009. 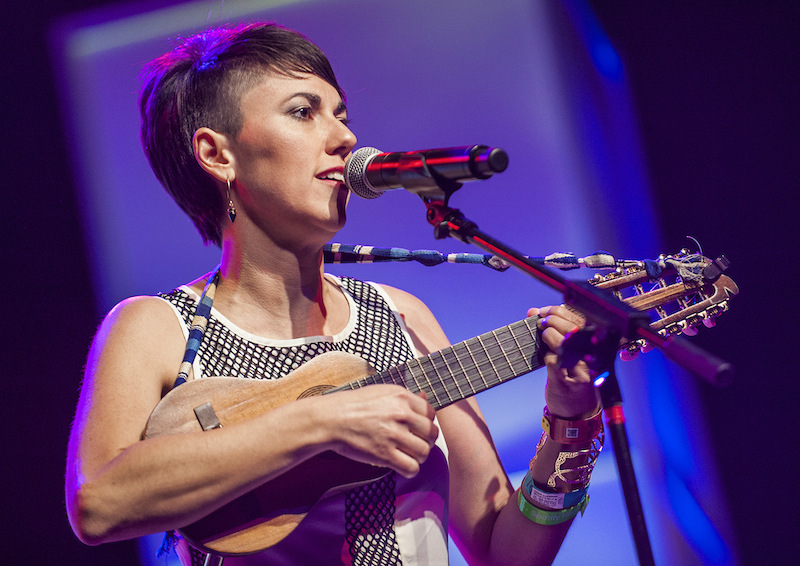 Austin Chronicle: How did you get involved with the benefit? Do you have a history with Conspire?

Gina Chavez: Yeah, so I actually … Michelle Dahlenburg ... I know her through my work. My director Ann Beeson is connected with her, so anyway, we’ve known each other. We actually did like a retreat thing together not too long ago. It was through that, and also because one of my coworkers.… I’ve done stuff for similar organizations. As you know there are a lot of similar-minded people in the social justice arena. Once you’re in those circles, I think, your name gets tossed around and things like that.

AC: And you’re with the trio?

GC: The trio is actually Sammy [Foster] is my drummer, and Michael [Romero] the trumpet player. So we have a trio. It’s kind of the more travel-able, more economical version of the Gina sixpiece. Kind of a side note is that we applied for a grant through the U.S. State Department, and so we are one of like ten groups nationwide that is basically going to represent the United States as cultural ambassadors. There’s kind of a Gina Chavez Trio identity because of that project. And that’s kind of where we first put it together, to apply for this grant. So we’re going to be going to Saudi Arabia in December, and all over Latin America next April.

AC: Is that because Michael and Sammy are the most interested, or you can only travel with so many people?

GC: It kind of happened. Sammy’s extremely talented. Everyone’s really talented, but Sammy is the bass player and the drummer. He kind of is like the entire rhythm section, which is extremely hard to do, but he makes it look really easy. And then Michael, obviously he’s a singer, he’s a multi-instrumentalist. It’s almost like a pretty good version of all of the parts of the music, while only being three people. And also their schedule is more flexible than a lot of my guys. Sammy works for himself, and Michael has summers off.

AC: What was the application process like? What does it mean to be an ambassador?

GC: The application process was kind of intense. [Laughs.] In the sense that … it’s the State Department, so it’s very strict. We had to submit all these materials, because it’s not that we’re only going to be playing music in other countries. The main premise is they send you to countries that don’t often have access to American music. It tends to be third-world countries. And the idea is that you’re not only playing concerts, you’re interacting with people in the community - most likely youth. You might do a workshop for young musicians on how to promote yourself using social media. Or you might be in a school with 500 kids, and you have to write a song with them in 30 minutes, and there’s no power, or whatever. Just crazy situations that you have to be able to handle, and also be able to … I think a lot of times they have a certain outcome. Like, ‘Hey, write a song with these kids about a natural disaster that has happened in their area recently.’ So the application process had a lot of hypothetical situations. It’s hard to think what you would do in certain situations. Without being thrown into those situations, it’s hard to think about what you would do. So that’s part of it. I think a lot of it is connecting with people. Maybe you don’t speak their language. How do you communicate? How do you put together a song with 12 different musicians, and you don’t speak their language: Go. That kind of stuff. I think it’s basically taking American music abroad, for one, and just being able to be a cultural ambassador, being able to not only bring your own culture to somebody else’s side of the world, but also to be culturally present and receptive to what they have to offer. Maybe make music together. Or write a song together. We’re really excited about it. I think a lot of it’s kids. We all love working with kids.

AC: It’s really interesting that this is going on, especially considering the kind of work Conspire does in telling the stories of these women. What kind of good do you think it does in the community?

GC: Honestly, I think it’s extremely important. It’s something that for me personally, it seems very far away. I don’t have close family members or anything like that who’ve been incarcerated, so that experience is kind of foreign to me. At the same time, I actually … Recently, somebody close to me has a family member who was recently incarcerated. I think that has really opened my eyes to the brokenness of our justice system, and the importance of … It’s like, once you’re in that system, there’s this cycle for many people. The people who don’t have any kind of consistent and positive influence in their lives, are often the people who get caught in this cycle in the justice system. And as somebody who’s had nothing but consistent, positive influences in my life, it just helps me see even more so how blessed and privileged I am, and how much of an anomaly that is in this world. There’s so many people who are amazing and good and loving people that have not had a chance at life. I think the stories of these women, the amazing part about it is these are some strong women. Not only for the experiences that they have been through, but for especially the women who are sharing those experiences in front of people. That takes an immense amount of pride-swallowing. It takes reflection, really hard reflection at not only what you’ve done, but what’s been done to you, and what you’re passing on to your children. All of those things. It’s a weight that I can’t imagine carrying. So for somebody like me, I need to hear those stories in order to understand what it’s like. I’m somebody who needs a visual, I need a story, I need a face for me to get it. In order for me to understand the depths of what somebody has been through.

GC: It’s really interesting. I always think about something like drunk driving. I would venture to say there is a huge swath of the population that has driven under the influence. Maybe you weren’t wasted, but you were heavily buzzed - whatever. The only difference between say myself and somebody who killed people is luck, or is that I didn’t get caught, or whatever. But we like to demonize people and say they’re monsters. I bet there is such a small proportion of the population that has not done that at least once. At the same time, I don’t know what it is, there’s some kind of … When you don’t get caught, and you get away with it, somehow we think we’re better than everyone else. I don’t know if I’m different from other people. Maybe what makes me different, if anything, is I want to know. I don’t see myself as so different from somebody who has made mistakes that have landed them in prison. I think a lot of times I come back to: I have the priviledge to make mistakes. Meaning that I have people who have money, or have family, or basically a safety net. People who have a safety net have the priviledge to make mistakes. And people who don’t have a safety net don’t have that privilege. That’s what often separates us. We’re like, ‘Oh, I don’t think I would ever end up on the streets, no matter how bad I messed up, because I have family that loves me.’ Now you take away my family, and I may not have that buffer anymore. When somebody doesn’t have a safety net, who becomes their safety net? We as a society have to become that safety net, and that’s what people are not willing to do. And that’s why these stories are so important, because it’s hard to listen to them and then say, ‘That person is not my sister. That person is not my kin.’ When you meet somebody, that’s when it becomes hard to stereotype and just lock everybody away in a little box.

AC: How are things going with Niñas Arriba?

GC: If everything goes as planned, our girls continue doing well, we should have two graduates next year. That will be Marta and Xiomara. It continues to be tough. You’ve probably heard about the recent news of El Salvador. [Gang violence in the nation has again boiled over in recent months.] We’re in touch with our girls, and checking in on them and stuff. It was hard. They had to miss some classes, which is hard because we’re sending them to a hard school. We definitely have times where the girls basically ask permission to drop a class because they’re not doing well in it or whatever. They’re struggling - in good ways, but struggling. So missing classes and stuff like that makes it even harder. The situation in El Salvador has definitely been affecting them. Not only in their schoolwork; it’s dangerous. That’s one of the reason they would miss classes, because if all the public transportation is shut down, then the only way you can get to school is some random person on the street giving rides. And that can be dangerous, especially because if the gangs decide stop those people, what happens? It was a very tense situation for a little while. Fortunately, it’s returned to somewhat of a normal situation. Other than that, they’re doing well. We keep up with our girls on Facebook. My only regret is I don’t spend more time actually touching base with them. In this case, thank God for Facebook.


Check out the Gina Chavez Trio and help support Conspire tonight at the All Saint's Episcopal Church, 209 W. 27th, 7pm.