On Tuesday afternoon Austin “Bee Czar” Walter Schumacher of Central Texas Bee Rescue was set to remove an old, giant beehive from Salem Lutheran Church because of a necessary construction remodel. Upon entry of the small building (built in 1951, located just south of the airport), Schumacher found a double-layer surprise. 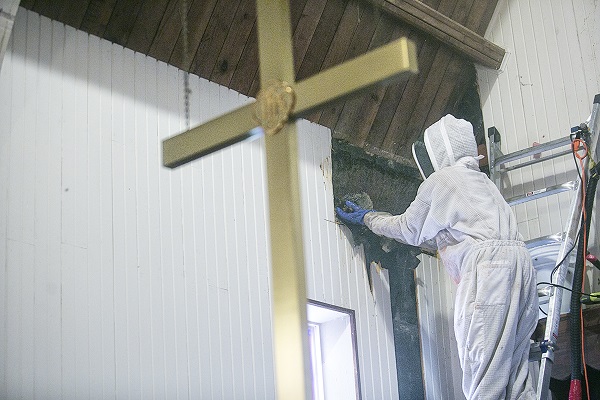 Turns out, it was actually three massive hives (“a holy trinity”) behind the altar, ranging from 15 to 25 years old, housing an estimated 1 million feral honey bees and 200 pounds of honey. And on the opposite wall, a 4-foot, round stained glass window, estimated at nearly 75 years old, features a beehive. “As you're leaving the church, the sunlight projects through that glass and it's this crazy orange and blue orb. It's gives you a spiritual feeling, that's for sure. It blew me away,” gushes Schumacher. Honey bee headlines relay the frightening possibility of a bee-less future, thanks to various factors, including neonicotinoids and habitat destruction. Schumacher and CTBR's umbrella organization, the American Honey Bee Protection Agency (AHBPA), work diligently to protect the little pollinators through public education and no-kill extraction. Schumacher’s rescue bees are rehabilitated and moved to new places, like some area schools, where students don bee suits and (with teacher guidance) care for campus apiaries. This weekend Schumacher will build the fence for their ninth partnering school, Pease Elementary. He also advocated for a bill that passed in June, making the Western honey bee Texas’ official state pollinator. Schumacher is hoping for an extra-sweet ending for these old church-dwelling bees. “The bees lived here happily for so long, so we're working with the church to bring them back. We’ll tend them on their property and … the donations for the honey that's extracted from those bees [goes back to the church]. The [pastor] thinks it's a marvelous idea and is going to talk to the congregation. Wouldn’t that be cool?”