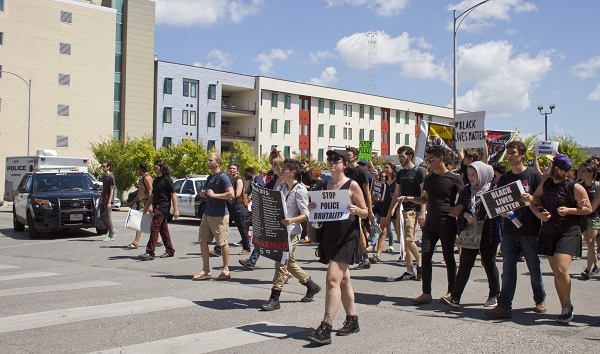 • Cops and Activists: Over two hours of demonstrations Saturday morning concluded with a reported six Black Lives Matter activists being arrested for a variety of misdemeanor offenses shortly after 1pm. Each arrest occurred in close proximity to 10th Street and Congress Avenue, though some of the charges – particularly obstructing a highway, a Class B misdemeanor – were rooted in offenses that occurred half a mile east, on I-35, after a group of protesters broke off from the morning's demonstrations at the Capitol and headed due east, eventually stopping on the interstate. Protesters traversed five blocks before exiting onto 10th Street, where they made their way back toward Congress – with intentions of circling back to the Capitol. (One demonstrator who posted video footage of the march on I-35 noted in his description that the protesters made a brief stop at the office of Fox's local affiliate KTBC on 10th and Brazos to offer up some choice words for the station.)

Witnesses told the Chronicle that police and DPS troopers were waiting for the demonstrators at 10th Street and proceeded to make a series of arrests. The officers used pepper spray in some cases, and exerted physical force on demonstrators in others. The charges, noted one demonstrator, were for obstructing the highway, failing to obey the order of a peace officer, resisting arrest, or interfering with public duties – most of which are Class C misdemeanors. (APD has not yet updated its incident report database to reflect Saturday arrests.) Videos taken from that portion of the demonstration have made their way around the Internet since the events occurred. Another individual in contact with Black Lives Matter organizers noted on Sunday that the number of arrests has caused concern within that community. Fifty or more individuals took part in the I-35 shutdown, though only six people were arrested. Those six, the individual noted, were all organizers or otherwise prominent members of the movement.

Those same sources added that relations between the Black Lives Matter rally and the Police Lives Matter march – a gathering of perhaps 2,000 in support of local law enforcement that began Saturday morning at APD Headquarters and extended to the Capitol before eventually returning to APD HQ – were largely nonexistent, and for the most part kept to themselves. For photos of the two rallies, see "Black Lives Matter and Police Lives Matter," Sept. 19. Cell phone footage of the arrests is available here. – Chase Hoffberger

• Blessed Trinity: The Episcopal Church announced last week its intention to develop Downtown Block 87, aka "The Trinity Block," at Seventh and Trinity Street. The Church is seeking a development partner for "the last privately owned, undeveloped" Downtown block. The block is currently a parking lot, and is zoned Central Business District with a potential of more than 600,000 square feet for development. The Church is hoping for a mixed-use development – including space for an "enhanced" Church Archives – with "generous parking." "The Episcopal Church has been part of Texas and of Austin since its beginning," said Bishop Stacy Sauls, chief operating officer of The Episcopal Church. "… We are committed to this development being a benefit to all segments of the community and something of which Austin will be proud." Part of the development will be subject to a "Capital View Corridor" under state law, limiting those areas to 75 feet in height, but other sections would allow substantial high-rise for offices or residential space. The Church is inviting development proposals; Rev. Canon Lang Lowrey said in a statement, "We believe that the Trinity Block promises the largest development opportunity in Downtown [and] we are excited to work with prospective partners to develop this site." ‐ M.K.

• Short-Termers, cont.: In its first regular meeting since adopting the FY 2016 budget, City Council met until nearly midnight last Thursday – and didn't quite resolve the burning issue of the evening: new regulations on short-term rentals. They worked their way about halfway through a series of potential amendments to a working resolution that would include occupancy limits, stricter inspections, bans on events like parties or weddings, ending the "testing the waters" advertising provision, and preventing "clustering" of STRs. Council also tentatively agreed on a one-year moratorium on Type 2 (non-owner occupied) STRs (all provisions subject to the eventual adoption of an ordinance.) After first deciding to postpone further and confirming action until Oct. 1 – on Friday, Mayor Steve Adler posted a special-called meeting for Tuesday morning, Sept. 22, 9am. For full coverage, check tomorrow's Daily News and this week's issue, on newstands Thursday. – M.K.

• Refugees in Waiting: Meeting with German officials and Syrian refugees in Berlin, U.S. Secretary of State John Kerry announced the Obama Administration will raise the cap on refugee admissions to 85,000 in the next fiscal year and to 100,000 in 2017 (the FY 2015 limit is 70,000). Refugees may arrive from the entire world, but the increase mostly responds to the flight of Syrians from the civil war. The administration can raise the numerical limit, but Congress must respond with sufficient funding to cover the costs of resettlement, much higher in recent years because of additional security measures in the wake of the 9/11 attacks. The Washington Post reported Sunday that Kerry said, "We want to take more. We understand the responsibility. We'd like to. But taking folks out of Syria, post 9/11, requires a very specific vetting process. We can target it. But we don't have the money allocated by Congress to hire people necessary to do the job. We're doing what we know we can manage immediately." The State Department reports that security checks on Syrian refugees have been taking from 18 to 24 months. – M.K.