Normally, Republicans and unions are like oil and water. Yet public safety workers have lined up behind Texas House Speaker Joe Straus after a mean-spirited offensive by two conservative pressure groups.

Last week, hardline muckrakers Watchdog.org issued an attack piece on Straus and House Administration Committee Chair Charlie Geren, R-Fort Worth, lambasting them for having having "gotten more cash from public-sector unions than just about any Democrat in the Legislature." This was quickly picked up elsewhere within the conservative echo chamber, with Empower Texans' writer Greg Harrison repeating the charges.

Harrison's big mistakes? Firstly, not noting that the union PACs responsible for the bulk of those contributions were cops, firefighters, and emergency service workers.

The second tactical error? Publishing this on the 14th anniversary of the 9/11 attacks on New York and D.C.

AFSCME Texas Corrections released a blistering statement on Sunday, "standing with our brothers and sisters in Fire and Police against these disappointing and divisive attacks." The statement continued that “Empower Texans' attack on law enforcement and first responders on the anniversary of 9/11 demonstrates how wildly out of touch they are."

In response to the Watchdog and Empower Texans hatchet jobs, Straus spokesman Jason Embry issued a scorching response to capital insiders Quorum Report: “It’s sad that this fringe group would stoop so low as to attack the Speaker’s support from firefighters and law enforcement on 9-11. These are the heroes who run to the sound of guns and risk their lives running into burning buildings.”

The Empower Texans' piece seems to be sour grapes over the failure last session of Senate Bill 1968 by Sen. Joan Huffman, R-Houston. That measure would have ended the practice of taking union dues from employee paychecks. However, Harrison seems to have forgotten that Huffman's bill would not have affected fire, police or emergency medical service unions of the kind that back Straus.

Why did they get the exemption? Because that's exactly the kind of union endorsement that, historically, has sat OK with Republicans. But in the right's desperate attempts to dislodge Straus, they'll seemingly throw anybody under the bus.

Of course, there's a certain degree of chutzpah in Empower Texans and Watchdog throwing stones about funding sources. Empower Texans and its political conjoined twin Texans for Fiscal Responsibility are both simply mouthpieces/armtwisters for Midland oil baron Tim Dunn.

As for Watchdog, its editors have repeatedly refused to answer whence its funding, or that of the Franklin Center for Government and Public Integrity under which it is housed, emanates. However, several respected media outlets, including Media Matters and the Center for Media and Democracy, have reported the wellspring to be none other than the Koch brothers (usually through filtering groups like the Donors Capital Fund – see "The Right Hails Hall," May 23, 2014). 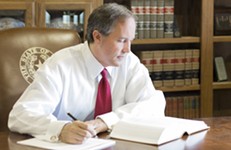