City Council getting down to the budget nut-cutting

Final city budget adoption begins Tuesday, Sept. 8, and Council needs to determine which of several dozen proposed amendments – increases, cuts, and money shuffles all – will survive. And they’re still trying to design a process to get there. 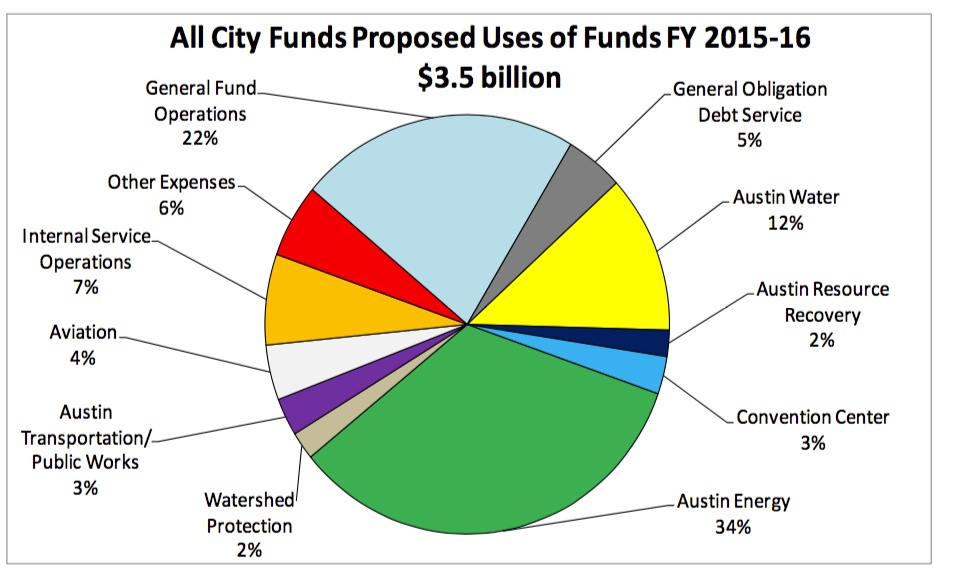 "All City Funds" includes the enterprise departments; most debate is over the 22% that is "General Fund" budget (Image by City of Austin, Budget Office)

Although the “Concept Menu” still survives on the budget development site (latest incarnation dated Sept. 3), at Tuesday’s work session – devoted to high-speed, inconclusive straw votes on everything on the list – Mayor Steve Adler suggested moving beyond it for next week’s adoption votes. Despite queries from several Council members, Adler said he wasn’t quite ready to describe an alternative process. Council members expressed concern that they were entering the weekend without being certain of how to proceed. (In the meantime, the first few pages of the voluminous menu remain the best place to see what's under consideration.)

Mayor Pro Tem Kathie Tovo (District 9) stepped into the breach, with process suggestions posted to the the Council message board (http://austincouncilforum.org), essentially mirroring the previous practice of members submitting amendments in advance for at least a day’s review, then proposing them on the dais as formal amendments to a pending budget adoption motion, for up or down votes, with the budgetary effects tracked in real time by the budget staff. That way, Council can calculate where they stand on balancing increases against cuts, and so on. District 2 Council Member Delia Garza and D7 CM Leslie Pool supported Tovo’s recommendations; D8 CM Ellen Troxclair suggested some adjustments that Tovo generally seconded.

Meanwhile, the mayor weighed in to acknowledge the need to balance any changes in funding, as well as to “accommodate the diverse perspectives on council, while being efficient, transparent, and fair.” That’s been his diplomatic approach to handling the liberal vs. conservative wings (for lack of more precise terms) on the dais; whether some Council members will prefer to rhetorically obstruct those accommodations remains to be seen.

Adler said he would try to post his suggestions today (Friday); as of 1pm they hadn’t yet hit the site. In the meantime, D6 CM Don Zimmerman posted his “analysis” of the proposed 3% pay raise for civilian employees and – by including benefits and other costs, concluded it is in fact a 6% increase: “With affordability such a major concern to Austinites,” Zimmerman wrote, “requesting a 6% increase is too much.” Since the majority of Council indicated Tuesday they generally approve of the proposed staff increases, whether Zimmerman’s latest tack will have more than a partisan effect remains to be seen.

Council meets Tuesday, Sept. 8, beginning at 9am, and there are a handful of pro forma Items on the agenda (e.g., ratifying the already negotiated public safety contract terms). But the bulk of the day will be devoted to reams of budget decisions, a process that may or may not extend into the next two days.

For ongoing coverage, follow the Daily News and next week's print edition.