Statues taken down, Blue Bell returns, all is well

In this week's news roundup: A state judge declares that the Confederate statues in the UT campus will not rise again; Blue Bell ice cream slowly returns months after a listeria outbreak; a police chief and an activist ("peacefully") tweet angry remarks at each other; and more. 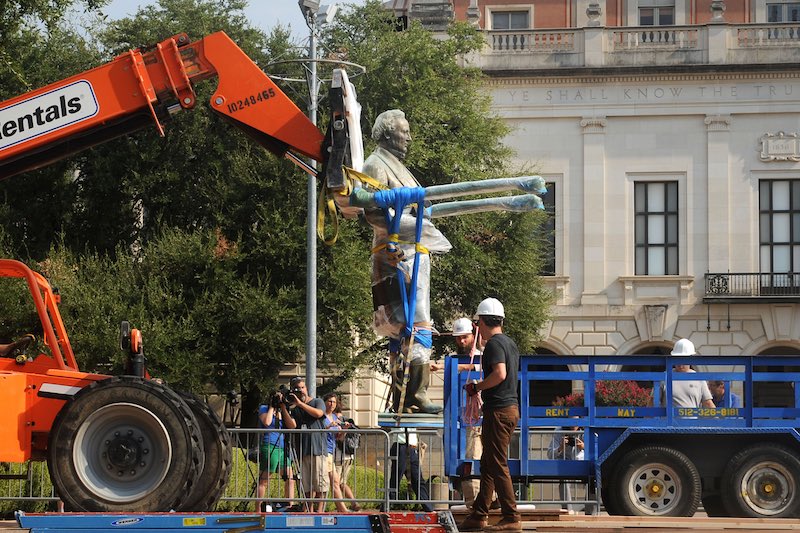 Jefferson Davis statue being removed from the University of Texas campus on Aug. 30, 2015 (Photo by John Anderson)

• Say Goodbye, Jeff: The Sons of Confederate Veterans failed to find a sympathetic ear at the Texas Supreme Court, and on Sunday morning the UT-Austin administration removed the statues of Confederate President Jefferson Davis and U.S. President Woodrow Wilson (who was also an SCV, although UT's official reason for his removal is "symmetry" on the South Mall). After cleaning and some restoration, the statues will be moved elsewhere on campus (Davis will most likely be displayed as an artifact at the Briscoe Center). Last week, state district Judge Karin Crump ruled that the university has authority over the statues, and that the Sons have no standing to obstruct the process. An appeal to the Third Court of Appeals was also rejected, and the group reportedly requested, without success, an emergency injunction from the Supreme Court. The hearing before Crump was notable mainly for the hyperbolic rhetoric of SCV attorney Kirk Lyons, who compared moving the statues (to other venues on campus) to the destruction of ancient monuments by the Taliban or ISIS, and the SCV's lawsuit to the bravery of the Chinese students "standing before the tanks" in Tiananmen Square. In a statement, Houston state Sen. Rodney Ellis said of the court's decision, "I'm pleased that, once again, UT can begin the process of removing the Jefferson Davis statue from the campus' Main Mall. We shouldn’t glorify people whose main claim to historical relevance stems from their defense of human slavery." – Michael King

• (Blue) Bells Will Be Ringing: H-E-B announced that it expects first delivery of the newly produced Blue Bell Ice Cream – after a listeria outbreak forced it to temporarily close earlier this year – to begin Monday at Austin stores. "Due to the limited production capacity from Blue Bell's Alabama facility," H-E-B announced Saturday, "Blue Bell will re-enter our market in five phases. Each of these phases was determined by Blue Bell. All Austin area H-E-B stores will begin receiving Blue Bell deliveries on Mon., Aug. 31 in addition to stores in Bastrop, Buda, Dripping Springs, Elgin, Georgetown, Kyle, La Grange, Leander, Pflugerville, Round Rock, Burnet, Kingsland, and Marble Falls." The specific times of availability were not announced, and the initial flavors will be limited: Home Style Vanilla, Cookies and Cream, Dutch Chocolate, and The Great Divide. – M.K.

• Take a Deep Breath: On Tuesday, Sept. 1, Austin celebrates the 10th Anniversary of the comprehensive smoke-free ordinance banning cigarette smoke in restaurants, most bars, and workplaces. Although there is no state law concerning a ban, more than 100 Texas cities (comprising nearly half the population) have enacted some limitation on smoking in public spaces and secondhand smoke, and the American Heart Association reports that in Central Texas, San Marcos and Horseshoe Bay are now smoke-free. The AHA released a statement congratulating Austin on its anniversary, and noted: "Smoke-free benefits everyone. It's good for Texas, good for the public health, good for business and saves taxpayer dollars. Secondhand smoke is the third leading cause of preventable death in the U.S., killing more than 42,000 Americans each year. Furthermore, secondhand smoke can increase a nonsmoker's risk for heart disease or lung cancer by up to 30%." – M.K.

• Made in the Shade: Prior to its regular meeting and second public budget hearing last Thursday (Aug. 27), City Council met as the Austin Energy Committee of the Whole, and after much wrangling over the agenda finally voted to recommend to itself that Council resolve to ask the city manager and AE to present to Council (by Oct. 1) a plan to acquire 600 megawatts of solar power by the end of 2017, a date that in the past AE management has suggested is overly aggressive and financially risky. Council still must formally ratify its committee resolution, but the loudest controversy at Thursday's morning meeting was whether citizens in attendance – most of whom listed themselves as supporting the new policy – would be able to give public testimony. Because of the meeting's compressed time frame – and Council members' penchant to burn daylight in procedural debate – public testimony was eventually postponed to whenever the full Council takes up the matter. The decision rubbed attendees the wrong way, and evoked a formal letter from Frances McIntyre of the League of Women Voters reproving the Council for jettisoning public testimony. File the Episode Under: No Good Resolution Goes Unpunished. – M.K.

• School Finance 101: Paying for public schools dominates the start of the week. On Aug. 31, Austin ISD trustees are scheduled to approve their budget for FY 2016, totaling $1.15 billion ($1 billion in general fund expenditures, $109 million in debt service, and $41 million in food services). One of the biggest drivers of spending is the rapid expansion of recapture payments – money sent to the state under the Robin Hood system. However, that system may not be around much longer. On Sept. 1, the Supreme Court of Texas will hear the state's appeal against Judge John Dietz's 2014 ruling that the current school finance system is unconstitutional (see School Finance on Trial, Aug. 28). Oral arguments begin at 9am sharp, and are scheduled to continue until around noon. With around 500 school districts suing the state, plus the Mexican-American Legal defense and Education Fund and multiple interveners, the court room is expected to be packed. However, the entire proceedings will be streaming online at the State Bar of Texas website. For more on how the state is gouging AISD's finances, read this week's issue, available Sept. 3. – Richard Whittaker

• Peaceful Tweets: Police Chief Art Acevedo took a brief break from promoting new cadets and letting his followers on Twitter know his action-packed weekend plans Saturday night to launch a brief, online offensive at local cop-watching activist Antonio Buehler and the police accountability collective the Peaceful Streets Project, which Buehler founded three years ago. The spat – one message followed by the retweeting of five messages from followers showing their support for Acevedo, the Austin Police Department, and law enforcement in general – came in response to comments made on PSP’s Facebook page after the murder of Darren H. Goforth.

Goforth, 47, was a 10-year veteran of the Harris County Sheriff's Office. He was shot and killed while pumping gas at a Chevron station about 25 miles from downtown Houston. Thirty-year-old Shannon J. Miles is the alleged gunman. He was arrested on capital murder charges shortly after shooting Goforth.

PSP's message went online Saturday morning at 1:05am, along with a link to an NBC News article detailing Goforth's death. Buehler, its author, began: "Pig executed in Houston," he wrote. "Probably shouldn't have joined a criminal gang. His bad decisions caught up with him. Blame his parents. Or the scores of thousands of pigs who abuse people every month in America. #thuglife" 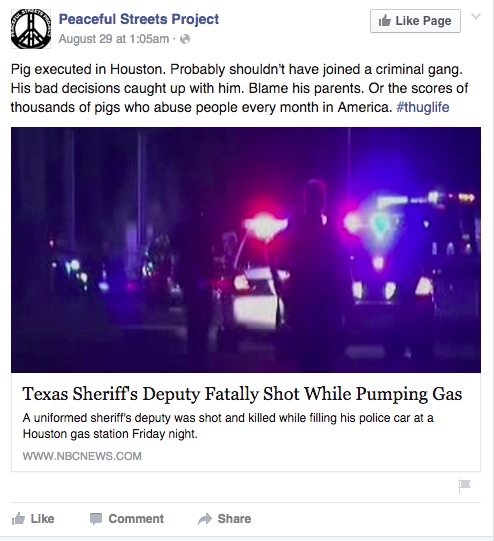 Acevedo responded briefly before 10am with a screenshot of PSP's message for his followers (and also likely Buehler). "This is how [the] mind of [a] so-called peaceful activist works & why police officers don't want him inches from their face," he wrote, the second half of his message a direct allusion to Buehler's latest arrest, on Aug. 2, in which the 38-year-old was booked for interfering with public duties – specifically, though not exclusively, putting a cell phone camera mere inches from an officer's face. (Buehler and his supporters have already published a number of videos and detailed blog posts to discredit the probable cause affidavits responding officers filed.) Acevedo then proceeded to retweet a few messages from supporters in the Acevedo v. Peaceful Streets saga before retweeting a definition of the word "peaceful." His final retweet came from a supporter who noted how random killings of both officers and civilians "is a travesty" that “exacerbates hate & violence.”

Both parties spent their Saturday nights canvassing Downtown – Acevedo in support of the Pride parade and Buehler on a cop-watching expedition with a few of his fellow activists. The former hasn't mentioned the little tiff – at least publicly – since it happened. Buehler has been more vocal.

He left a lengthy comment on a KVUE story about the exchange and also issued a blog post decrying "The hypocrisy of the police" and the way "their supporters perpetuate violence." In that, he explained the motives behind his Facebook post: "Our Facebook post was meant to serve as a mirror for those who reflexively defend criminal cops while slandering their victims. Instead of helping people come to terms with their hypocritical view of crime and personal responsibility, all we got was a bunch of hysterical responses from the people who are so often eager to slander the dead." For better or for worse, neither party's listening to what the other has to say. – Chase Hoffberger