Sulma Franco, an undocumented immigrant facing the possibility of deportation, was granted an order of supervision from Immigration and Customs Enforcement on Aug. 18, allowing her to remain in the country for the time being. 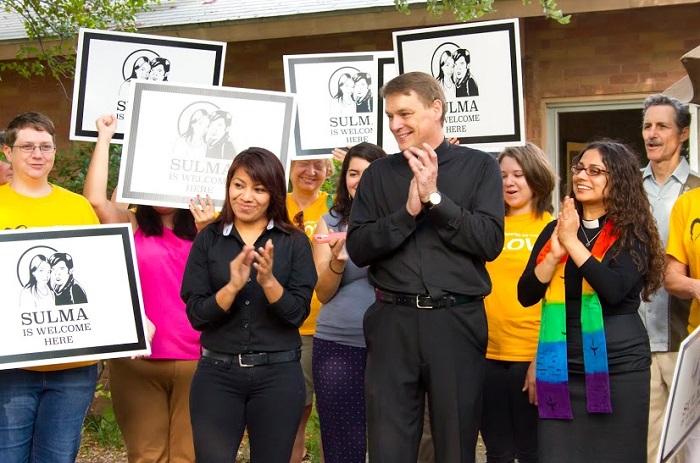 Franco's case attracted attention after she was offered sanctuary at the First Unitarian Universalist Church of Austin in June. Reverend Meg Barnhouse said that the church was taking part in a tradition that stretches back to the Old Testament. The particulars of Franco's plight are especially evocative of the Sanctuary Movement of the Eighties, during which churches across the U.S. offered safe haven to Central American political refugees.

Barnhouse explained that the UU Church was a welcoming place for Franco, who is a lesbian. Franco had advocated for LGBTQ rights while she was living in Guatemala, but fled the country in 2009 because she feared for her life. (In 2012, the International Gay & Lesbian Human Rights Commission reported to the United Nations Human Rights Committee that "it is clear that there are persistent violations of the right to life of LGBT persons in Guatemala on the basis of their sexual orientation and/or gender identity ... In some instances, the State has been responsible for the extrajudicial killings of LGBT individuals.")

Although Franco had initially been allowed to begin the process of applying for asylum in the U.S., she was ultimately threatened with deportation after missing a deadline to file some paperwork. On Tuesday morning, after having spent over a month at the church, Franco and her supporters prepared to travel from Austin to ICE's offices in San Antonio to ask for a stay of removal, which would allow her to remain in the country without fear of deportation for the next year. Franco, petite even in heels, addressed the crowd in Spanish as well-wishers wearing yellow shirts held signs emblazoned with the words "Sulma Is Welcome Here" and the smiling faces of Franco and her partner.

Later in the day, Alejandro Caceres of Grassroots Leadership, which is part of an alliance of organizations working to assist Franco, told the Chronicle ICE had granted an order of supervision, which means that she is finally able to return to her home in Austin. Franco's stay of removal is expected to be issued in the next week. She will then resume the process of applying for asylum.

An earlier version of this story incorrectly stated that Franco's partner is transgender. The Chronicle regrets the error.