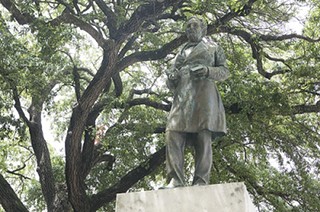 Jefferson Davis stays put, for the time being. (Photo by Jana Birchum)

• Capitol Arson Suspect Arrested: The man suspected of setting fire to a car outside the Texas State Capitol has been arrested. Texas Department of Public Safety identified Iowa native Michael Patrick Wagner, 38, through a parking ticket. He was picked up by Marion Police Department officers for shoplifting on Aug. 12, and detained in Linn County Jail. Texas DPS dispatched two Texas Rangers and a Criminal Investigations Division Special Agent to Iowa with an arrest warrant for arson, a second-degree felony punishable by 2-20 years in jail. Wagner is also suspected of trying to gain access to Speaker Joe Straus's official apartments before the fire. – Richard Whittaker

• Unwanted Guests: The Travis County Sheriff's Office is looking into an encounter had on Aug. 2 between a few of its officers and a woman, Tori Thayer, who was not sure why said officers were in her Pflugerville home. According to reports, officers showed up to Thayer's house at 3am because they were looking for her roommate, Carly Christine, but decided to continue with their investigation – without a search warrant – after Thayer told them Christine was not there. (Family members had told TCSO that Christine was suicidal.) Video recorded on Thayer's cell phone shows that the officers got physical with the woman and threw her to the ground before temporarily handcuffing her. Thayer filed a formal complaint against TCSO on Wednesday morning. – Chase Hoffberger

• Gung-ho Gun Runner: Former Williamson County Judge Tim Wright was sentenced to 18 months in prison and three years probation on Friday after pleading guilty in May to two of nine felony counts tied to his side business selling guns. Wright, 70, admitted that he sold guns without a license in addition to making false statements to investigating law enforcement. He said that he illegally sold more than 60 weapons between June 1, 2014, and Dec. 15, 2014, including one to an undercover informant whom he knew was a convicted felon. He first came into contact with the Bureau of Alcohol, Tobacco, Firearms, and Explosives (ATF) in Sept. 2014. Then, he said that he would cease operations until he completed the application and training necessary for a federal firearms license. He completed the necessary steps in Dec. 2014 but didn't receive his FFL until Jan. 2015. He conducted a sale during the time in-between, fraudulently filling out an ATF form in the process. He was indicted for the felony in early April of this year. – C.H.

• Douse that Flame: On Friday, the Austin Parks and Recreation Department issued a burn ban for city parkland, effective immediately. Noting that drought conditions have returned to Central Texas (this weekend's early Saturday rain was the first in 44 days), PARD warns of increased risk of wildfires. "The ban temporarily prohibits open fires and grilling in all city of Austin parks, including greenbelts and preserves. The use of wood or charcoal BBQ pits/grills/smokers is prohibited. Propane grills and propane stoves are allowed in designated picnic areas only." Violation of the burn ban or the smoking ban in city parkland can result in a $300-500 fine. – Michael King

• Schools Renamed?: First UT debated hard on whether the statues of Confederate supporters and leaders should be removed from campus. Now Austin ISD is starting community engagement on whether four of its campuses should be renamed. The list includes: Lee Elementary (named after Robert E. Lee); Lanier High School (named after Georgian soldier Sidney Lanier); Reagan High School (named after Confederate Postmaster General John H. Reagan); and Eastside Memorial at the Johnston Campus (named after General Albert Sidney Johnston). The AISD Board Oversight Committee on Excellence through Equity, Diversity, and Inclusion will take testimony on the issue at 3pm on Aug. 20 at the AISD Performing Arts Center, 1500 Barbara Jordan Blvd. However, the conversation could become more complicated than it first appears. There has been long-running public pressure to rename Lee, but Lanier is more famous as a poet and author than rebel blockade runner, while Reagan became a leading voice for a peaceful reintegration into the Union, and an advocate for expansion of federal powers after the Civil War. Meanwhile, the composite Eastside/Johnston name was chosen after lengthy civic engagement in 2008, and was intended to reflect the old Johnston High's pivotal place in East Austin history. – R.W.

• Hold That Statue!: Jefferson Davis may be as dead as Generalissimo Francisco Franco, but he has more friends in Texas. No sooner had UT-Austin President Gregory Fenves directed the relocation of the South Mall statue of Confederate President Jefferson Davis to the Briscoe History Center, than the Sons of Confederate Veterans (several generations later) filed for a temporary restraining order to leave the statue (and another of President Woodrow Wilson, also scheduled to be moved) in its current place. UT administration responded that under state law, the university has the authority to move the statuary, but agreed to hold off any change until the legal challenge is resolved. Kirk Lyons, attorney for the Sons, did not spare the rhetoric, comparing the decision to ISIS and the Taliban, and insisting the decision to move the statues "affects the liberty of every Texan" – presumably not including the descendants of former slaves under Confederate rule. – M.K.

• The More the Merrier: As long-rumored, two more candidates have let it be known they will indeed run to replace retiring Precinct 1 Travis County Commissioner Ron Davis. One is Jeff Travillion, a division manager in the City of Austin Code Department who previously worked for state government, and has been active in both the Black Austin Democrats and the NAACP. The other is Arthur Sampson, who previously worked for the city as a project manager and now has his own contracting business. Sampson has run for the seat twice before, most recently in 2012, coming in fourth (12%) in a four-person race. The two men will join already declared candidates Richard Franklin (also a candidate in that 2012 race to unseat Davis) and attorney James Nortey. – M.K.

• So Long, Farewell: Ana Yáñez-Correa, the executive director of the Texas Criminal Justice Coalition, is leaving Austin for a new job in Washington D.C. Yáñez-Correa announced Tuesday that she'll be taking over as the criminal justice program officer at the Public Welfare Foundation. Yáñez-Correa took over at TCJC in 2005 and has worked with policymakers through the past six state legislative sessions, ultimately helping to close three adult and nine youth correctional facilities in the state, in addition to a string of other accomplishments. – C.H.

• Now Hear This: City Council has scheduled a full week's work, beginning this morning with a budget work session (another on Wednesday), regular work session Tuesday for Thursday's (Aug. 20) full meeting, which will include several budget-related public hearings. The short-term rental resolution is scheduled to return from the Planning and Neighborhoods Committee (meeting Monday afternoon at 4pm). The budget hearings will consider utility rates, Austin Recovery rates, all the other rate and fee changes, the changes in the drainage fee structure, and the overall budget. There's also a hearing on the appeal, likely to spark plenty of testimony, by Springdale Farms of its application for a conditional use permit, rejected by the Planning Commission. That's if they get through all the morning contract reviews, in recent months a playground for micromanaging council members and a minefield for city staff. Committee meeting schedules and agendas are available here. The full Thursday agenda is here. Follow Daily News and the print issue for more on Council matters, as they develop. – M.K.

• Noli Mi Tangere: City Council's regular Citizens Communication time – normally 30 minutes right around noon – is generally a mix of populist commentary, random utterances, and occasional conspiracy-mongering. CitCom regular Carlos León is a font of the latter (genus Alex Jonesiana), and with a particularly nasty, personal edge with which he likes to denounce Barack Obama as a noncitizen, traitor, Muslim, etc. At the Aug. 13 meeting his sole target was Mayor Steve Adler, whom he accused of crypto-homosexual "assault." According to León, at the July 27 Cap Metro meeting, the mayor had apparently touched León when politely opening the door for him, or as León described it: "Adler put his hand on my lower back, an unnecessary, uninvited, physical contact against me. Under the guise of help, Mayor Adler’s sick, flirtatious touch was him trying to possess, control, and exert power over me, like how homosexual males try to psychologically confuse, flip, and control us heterosexual males. Keep your hands to yourself, Mayor Adler. If you lay your hand on me again, expect me to consider it assault [citing the Penal Code] … which legally permits and empowers me to defend myself with force. … Mayor Adler, how do you like being attacked, without warning, with your hands tied behind your back?" Neither the mayor nor any council member responded to León’s absurd but venomous charge (and threat, and rancid homophobia) – presumably not to encourage more of the same. But it remains unclear why, under the guise of "public comment," León is routinely permitted to spew his slanderous, hateful nonsense at City Hall. – M.K.