Next time, bring beer, not knives

By Kevin Curtin and Chase Hoffberger, 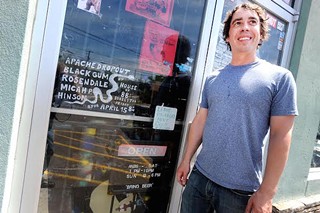 An argument inside independent East Austin record store Trailer Space Records spilled out into the parking lot Thursday evening (Aug. 6) and concluded with one arrest and an undisclosed number of stabbings.

TSR owner Spot Long confirmed late on Thursday night that an altercation began inside his store after “two guys with white power tattoos who I’ve never seen before” came into the shop while a band was playing a small show. (Trailer Space hosts live performances five nights a week; last night’s lineup included metal groups Jugurtha, Broodwitch, and Ashtaroth.) Long said the two started causing trouble almost immediately and were kicked out of the venue. “This isn’t fucking Roadhouse,” he said. “You can’t fight inside our record store.”

Many in the audience spilled out onto the parking lot overlooking Angelina Street and Rosewood Avenue. Long said he asked the band to stop playing, but remained inside while those in the parking lot continued to argue. According to one concertgoer who followed the two alleged assailants, one of the them – a tall, shirtless man with a swastika tattooed to his chest – stabbed a member of one of the three bands before getting jumped by other members of the crowd. (Members from the three bands scheduled Thursday night did not return requests for comment.) He and his friend eventually broke free and reportedly ran up Angelina Street. An Instagram picture circulating around the Internet indicates that a tall, bloodied, shirtless man with a swastika on his left chest was arrested last night outside of the Sagra on 11th Street, four blocks away from Trailer Space.

Indeed, Austin Police confirmed Friday afternoon that the individual in the photo is a man named Jimmy Baylor. The 23-year-old was arrested and charged with aggravated assault. APD added that additional arrests may follow, though there are no other affidavits currently on record.

Long said that he did not witness anybody getting stabbed. Reached by telephone on Friday, he confirmed that the store was open and operating as usual, encouraging patrons to stop by. The Triggermen, an off-center local hip-hop trio, host a free show with Gospel Truth and Nameless Frames at 7:30pm.

This post has been updated to include information about a confirmed arrest.