While a Texas Health and Human Services Committee hearing was called Wednesday morning to investigate whether Planned Parenthood had violated the law, Texas anti-choice senators seemed convinced the reproductive health care network had engaged in illegal activity, right off the bat. 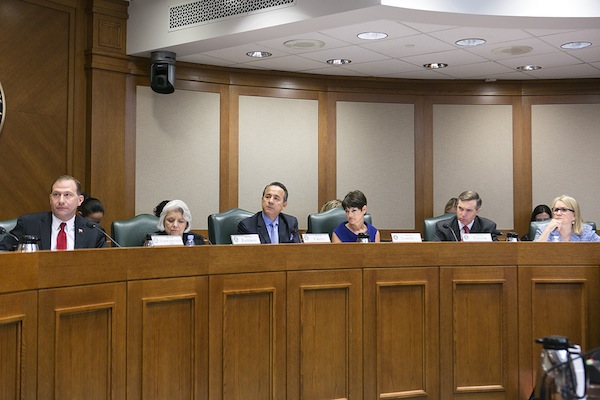 The Texas Senate Health and Human Services Committee held a hearing to investigate Planned Parenthood on Wednesday morning, after an anti-choice front group released video footage of alleged illegal activity. The claims have been countered by Planned Parenthood. (Photo by Jana Birchum)

After the release of highly edited, misleading videos by the Center for Medical Progress – an extreme anti-abortion organization posing as staff of a fictional biomedical research company – allegedly showing providers engaging in the sale of fetal tissue, conservatives in Congress and across the nation have seized on the opportunity to attack Planned Parenthood. Longtime foes of the health provider, Attorney General Ken Paxton and Gov. Greg Abbott have followed suit, opening an investigation into the local affiliates’ practices.

State officials also called for an invite-only hearing before the Senate health committee to “examine the business practices and regulatory structure of Planned Parenthood affiliates in Texas,” and to investigate whether state or federal laws are being broken by Planned Parenthood as it relates to the donation and/or sale of fetal tissue.” Committee members additionally sought to consider offering recommendations to regulate abortion providers. The reproductive health network has denied the dubious claims and further analysis of unedited video counters charges by CMP, as the Chronicle previously reported.

While Democrats on the committee, including Sens. Jose Rodriguez, D-El Paso, and Judith Zaffirini, D-Laredo, compelled the quorum to remain “open-minded,” objective, and fact-based, and to refrain from injecting their personal beliefs about abortion into the conversation, it was overwhelmingly apparent from the outset the hearing was less about getting down to the truth than it was another shot at both Planned Parenthood and abortion care in Texas. Amounting largely to political posturing, the nearly five-hour committee hearing featured fervently anti-choice legislators criticizing the videos as “morally reprehensible.” At one point, Sen. Donna Campbell, R-New Braunfels, suggested Planned Parenthood was a too-large “monopoly” that needed to be broken up.

The bulk of the hearing was devoted not to medical research or fetal tissue experts but to giving a platform to representatives from anti-choice organizations, including Texas Right to Life and Texas Alliance for Life, and to former Planned Parenthood staffer turned anti-abortion poster child Abby Johnson. Tellingly, not one of those panelists could point to evidence of any Texas law being broken by Planned Parenthood, with the exception of an anecdotal story from Johnson from 2007-09. (Johnson, either mistakenly or willfully, admitted to making calls to abortion clinics during previous abortion law debates on behalf of former Attorney General Abbott, without first identifying herself. When pressed about who in the office specifically asked her to make these calls, an evasive Johnson said she could not remember.) 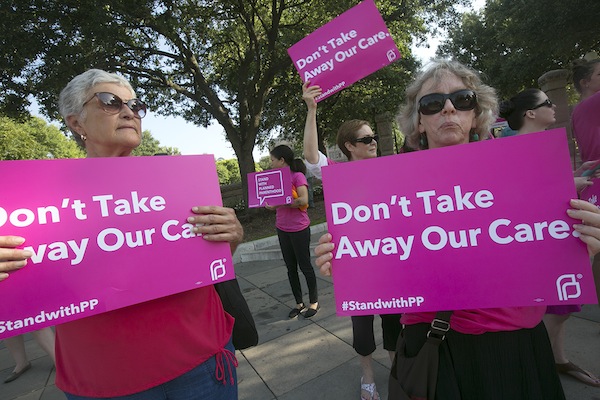 Pro-choice advocates rallied outside the Capitol while a hearing about Planned Parenthood business practices waged inside. (Photo by Jana Birchum)

It’s accurate that Planned Parenthood failed to testify at the meeting, but what was conveniently left out was why. In a letter addressed to Schwerter, Ken Lambrecht, president and CEO of PP Greater Texas stressed the organization does not partake in fetal tissue donation programs, rendering their involvement largely irrelevant: “The health centers and ambulatory surgical centers affiliated with Planned Parenthood of Greater Texas have never participated in fetal tissue donation or research. As a result, [we do] not plan to appear on Wednesday, as it is not clear what the organization could offer in regards to the Committee’s inquiry on this particular topic,” wrote Lambrecht. To reiterate, Texas lawmakers spent hours in a committee hearing investigating a practice which Planned Parenthood of Greater Texas doesn’t actually participate in.

Lambrecht also noted in a public statement, “the Committee has made it abundantly clear that it has no desire to hold a responsible, fair, fact-driven hearing. Therefore, we decline the request to testify in person.” Moreover, it’s typically cautioned by legal counsel that if you’re under investigation, it’s wise not to testify.

The thin dash of actual expertise came from testifiers with the Department of State Health Services. However, DSHS said they don’t hold the regulatory authority over fetal tissue donation programs; Republican committee members hinted that could change next session via legislation. The health department assured members that abortion clinics receive annual, unannounced state inspections, as per state law, and are highly regulated.

Testifying before the committee, AG Paxton claimed his office had secured more undercover video (not yet released to the public) of storage and disposal of fetal tissue in a Houston facility but failed to disclose where he obtained the footage or any specifics of its content. The AG – who is facing a possible felony indictment – said he is pursuing a criminal and civil investigation yet could not provide a concrete timeline of when it would conclude or give definite parameters of the investigation. For instance, Paxton did not comment on whether any other entities beside Planned Parenthood will be examined or if the shady front group Biomax and the Center for Medical Progress will also be investigated for fraudulent practices, as they are by California state attorney general. Perhaps showing the actual intent of the hearing, Paxton said that even if PP is not in violation of fetal tissue laws, “the true abomination in all this is the institution of abortion … even the language they use like 'product of conception' betrays a denial of humanity.”

Committee members signaled this would likely be the first in a series of future hearings on Planned Parenthood. 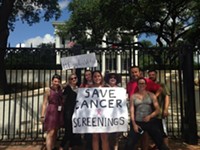