In this week's News Roundup: Council debates budget changes for a growing city, and a grand jury decides not to indict the officer who killed a shooter in November. 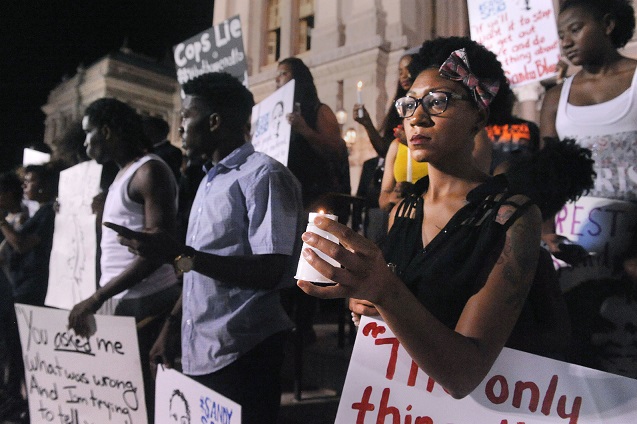 A vigil at the capitol is held for Sandra Bland, a 28-year-old black woman who died in Texas police custody on July 13. (Photo by John Anderson)

• Non-indictment: A Travis County grand jury declined to issue any type of indictment against APD Sergeant Adam Johnson in the death of Larry McQuilliams. Johnson shot and killed McQuilliams at 2:32am on Friday, Nov. 28, the morning after Thanksgiving, after the 49-year-old Austin resident shot up a series of civic buildings (including the federal courthouse, a nearby bank, the Mexican Consulate, and Austin Police Department headquarters) with two different weapons: an M&P15 .22-caliber long rifle and an Arsenal model SLR 95 rifle. Johnson, a 16-year veteran with APD, was boarding horses near APD headquarters when he and fellow officers saw McQuilliams firing in their direction. Johnson shot one round back and hit McQuilliams more than 300 feet away; the attacker died on impact. – Chase Hoffberger

• Budget Unveiling: City Council returns to official business this week, beginning with a budget work session on Thursday, July 30, scheduled to be devoted to the formal presentation of City Manager Marc Ott's budget recommendations. (The next regular meeting is the following Thursday, Aug. 6, when that Springdale Farm CUP appeal is scheduled to be heard, along with plenty of pending contracts for Council members to chew, regurgitate, and chew.) The broad outlines of the proposed budget were described in earlier presentations – featuring rising city costs chased by rising city income (2015 property tax revenue and sales taxes have both been bullish) – complicated somewhat by uncertain Travis County appraisals and Council's earlier decision to install a 6% homestead exemption on property taxes (prior to the budget development). The TCAD issue has been officially punted to the courts – presumably meaning that city budget staff will soon have definite appraisal numbers for budgeting purposes – and the mayor has proposed that the property tax rate be adjusted to accommodate the 6% exemption (somewhere between $5-$7 million in annual dollars, a down payment on 20%). Contrariwise, conservative Council members are advocating taxing only at the "effective rate" (i.e., same income as last year, plus new construction), meaning annual rate cuts while property values continue to rise (and the city keeps growing). Covering higher expenses and a bigger city with less money will be an interesting magic act; the curtain is about to rise. – Michael King