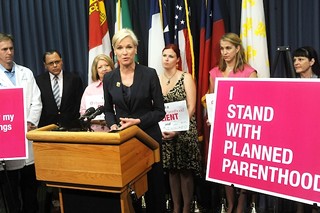 Cecile Richards of Planned Parenthood addresses a crowd at the Capitol in 2011. Richards publicly refuted the latest claims against the provider. (Photo by John Anderson)

As if Texas lawmakers have not done enough to eviscerate Planned Parenthood, they now plan to launch a full-scale investigation into the nationally affiliated health care network’s business practices based on heavily edited and misleading videos.

After the now two widely circulated undercover recordings that show Planned Parenthood staff members discussing fetal tissue were released, Gov. Greg Abbott – jumping on the bandwagon with other conservative governors and members of Congress – has called to expand the inquiry to determine if PP is breaking the law. “This latest video showing yet another Planned Parenthood senior official negotiating the price of unborn baby body parts is more than just callous and morally bereft, it may be criminal,” said Abbott in a statement. “The video appears to directly contradict Planned Parenthood’s statement … that they do not earn a profit for selling body parts. [The] new grotesque revelations necessitate that Texas expand its investigation into this abhorrent practice.”

Not so true. While the videos may, on the surface, appear possibly questionable and the tone sometimes arguably in poor taste, much context has been left out of the anti-choice response. For one, consider the source: Texas conservatives and other GOPers are eating up dubious claims from the Center For Medical Progress – an ardently anti-choice group associated with Live Action, known to release heavily edited videos that have historically targeted Planned Parenthood. And one of CMP’s founders (Troy Newman) heads Operation Rescue, a group that advocated harassing abortion clinic workers and ran a decades-long campaign against murdered abortion doctor Dr. George Tiller. The shady practices of CMP have compelled four U.S. House Democrats to demand an investigation of their own from the U.S. Attorney General into whether the group broke any laws when impersonating corporate officials from a fictional medical company.

Secondly, consider the power of editing: For instance, while the first nine-minute sting video accuses Planned Parenthood Federation of America's Senior Director of Medical Services Dr. Deborah Nucatola of “selling” fetal tissue, an unedited three-hour version of the video reveals Nucatola was actually referring to reimbursement rates for legal donation, according to an analysis by Media Matters for America. Just like other health care providers, PP affiliates offer programs for women wishing to donate tissue to research for treatment and cures of diseases such as Parkinson's and Alzheimer's, according to the provider. Costs, like transporting the tissue to the research centers, are reimbursed which is pretty typical in the medical community.

"These outrageous claims are flat-out untrue, but that doesn't matter to politicians with a longstanding political agenda to ban abortion and defund Planned Parenthood,” said Eric Ferrero, vice president of communications with Planned Parenthood Federation of America, in a statement. “Women and families who make the decision to donate fetal tissue for lifesaving scientific research should be honored, not attacked and demeaned.”

Texas indeed harbors a “longstanding political agenda” against Planned Parenthood – in 2011 the Legislature slashed funding to keep state dollars away from the network and in 2012 state officials banned the provider from a Medicaid program for low-income women (a challenge to that rule was defended in court by the office of then Attorney General Abbott). In their latest attack, lawmakers booted PP out of the Breast and Cervical Cancer Services program this past session, compromising care for thousands of uninsured women, explicitly because the organization provides abortion care.

Lt. Gov. Dan Patrick – author of anti-choice legislation and foe of PP – requested the Senate Health and Human Services Committee meet to decide if PP affiliates in Texas are violating law. A Capitol hearing (for invited testimony only) is scheduled for Wednesday, July 29 at 9am. The committee plans to “consider recommendations to strengthen regulations on abortion providers, including further restrictions on the sale of fetal tissue.” Planned Parenthood of Greater Texas – which includes Austin, Dallas, and Waco clinics – say they do not participate in tissue research programs.