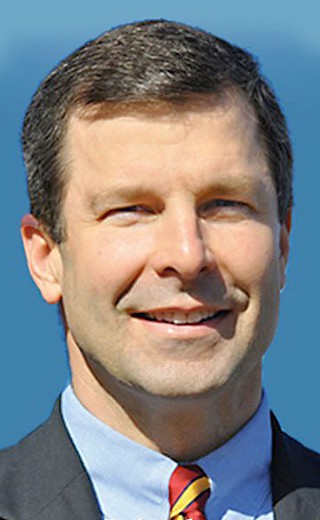 Rep. David Simpson, R-Longview, who would destroy marriage in order to save it.

Remember when Republicans kept saying marriage equality would wreck marriage? Seems the real danger is the GOP, since Rep. David Simpson, R-Longview, thinks we just should get rid of the institution altogether.

The Texas GOP response to Friday's Supreme Court of the United States ruling on the issue has been predictable, with Gov. Greg Abbott railing against activist judges, and Attorney General Ken Paxton issuing an opinion that he doesn't think state employees can be forced to comply with the law.

Simpson has gone one step further, saying he has written a letter "asking the governor to recall the legislature so that legislation may be immediately considered to remove state and local officials from the process of issuing marriage licenses." Instead, he wants the job handed over to members of the clergy (for those that do not want a religious ceremony, a notary public will do). The aim is to prevent people from forcing churches to marry people that they don't want to marry. You know, gay couples, interracial couples, southpaws (they don't call them sinister for nothing).

Simpson wants to return to the biblical definition of marriage (excluding, presumably, the incestuous and polygamous relationships that litter the Old Testament). He wrote, “I cannot and I will not sit idly by while unelected judges redefine the sacred institution of marriage and force our county and state officials to violate their most cherished beliefs."

So it's not marriage per se that Simpson opposes. It's government marriage, which is apparently a thing. He condemns as "just another government program and a modern failure."

By total coincidence, Simpson is running to replace retiring Sen. Kevin Eltife, R-Tyler. He's headed for a primary battle with Rep. Bryan Hughes, R-Tyler, and this could well be a sign of how far to the base-pandering right he could go to secure the Republican nomination.

This isn't the first time Abbott has heard this call. Back before the SCOTUS ruling, a coalition of conservative groups including the Texas Eagle Forum and Americans for Truth About Homosexuality had called on the governor to reconvene lawmakers to pass the reactionary marriage bills that didn't pass during the regular session. He's also received requests to reconsider the cuts to the Texas Moving Image Industry Incentive Program. But considering he didn't call a special session for ethics reform, even though it was one of his five emergency items for the regular session and he actually vetoed the one major measure because it was so compromised, it's unlikely Simpson's request will receive a gubernatorial welcome.

However, that doesn't mean such laws will never happen. Take Utah: Its lawmakers passed a marriage equality bill in 2013, one that has been tested in and survived federal court. That didn't stop an unnamed Utah lawmaker from pre-filing a bill like what Simpson is proposing.