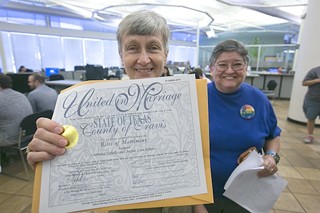 In this week's News Roundup, Greg Abbott and his not-so-merry men call for a protection of "religious objectors" (i.e. conservative government officials); a Council member comes out on Facebook regarding his feelings on homosexuality; Council clears the table; and more.

• Love Wins: As of Friday, more than 300 (both same and opposite gender) wedding licenses were issued by the Travis County Clerk's office, following the U.S. Supreme Court's decision to legalize same-sex marriage nationwide. Local county leaders were enthusiastic to begin complying with the high court’s order, issuing licenses as early as 10:30am, one of the first in the state. Additionally, some Travis County judges waived the 72-hour waiting period necessary before tying the knot in a ceremony. But not all counties were so welcoming: Clerks in Williamson County refused to offer any licenses on Friday, claiming that the county attorney was still reviewing the law and that because the marriage application has now changed, extra time was needed to update software. Yet, later in the day the county attorney allowed an opposite-sex couple to obtain a license. Some states across the country are resisting the new law of the land: Mississippi and parts of Alabama are dragging their feet when it comes to issuing licenses.

The historic ruling was also met with predictable (and desperate) rebuke from Republican state officials like Gov. Greg Abbott, A.G. Ken Paxton, and Lt. Gov. Dan Patrick, who sent a letter to Paxton requesting a legal opinion on the protection of “religious liberty rights.” Patrick calls to widen the scope of SB 2065, the “Pastor Protection Act” – meant to shield pastors from liability if they refuse to wed a same-sex couple – to include county clerks, judges, and justices of the peace; however, the legislation is relegated to clergy. “It has been said that those who oppose gay marriage are on the wrong side of history,” said Patrick. “I would rather be on the wrong side of history than on the wrong side of my faith and my beliefs.” Paxton responded with a (non-binding) 6-page legal opinion backing up county clerks who wish to refuse licenses based on "religious objections." The A.G. warns that doing so could very well result in litigation and/or a fine (of up to $500) but that "numerous lawyers stand ready to assist clerks defending their religious beliefs, in many cases on a pro-bono basis." The strength of "any particular religious accommodation claim depends on the particular facts of each case," he repeatedly noted.

• Unfriended: D6 Council Member Don Zimmerman fell victim to his own social media presence on last Friday, when he compared pedophilia and same-sex marriage. In response to a status comparing the struggle for gay marriage to that of interracial marriage, Zimmerman commented: "Replace 'pedophile,' then explain how you can justify denying marriage happiness to a couple in love based on age discrimination. In fact there is no such thing as 'pedophilia,' only 'intergenerational love.' Explain why you are a pedophobe and why you're opposed to love and equal rights." At the tail-end of a scheduled town hall on Saturday, Zimmerman was confronted by Democratic activist Will Davies, who told KVUE, "I couldn't believe that there's an elected official in a city, that describes itself as one of the most progressive cities in the country, that is making a moral equivalency between pedophilia and homosexuality." Zimmerman refused to comment, asking first, "I'd like to know how that question affects District 6?" He then pointed residents to his "exclusive" interview with former Council candidate and Come And Talk It radio host Michael Cargill, which aired Sunday. Saturday morning Zimmerman declined the Chronicle's request for an interview, now and in the future.

In his interview with Cargill (available here; starts at the 55-minute mark), Zimmerman said that he didn't think "this is the worst decision ... it's not as bad as Dred Scott," but that he worries about the "unintended consequences" of the decision, and once again raised the specter of pedophilia, saying that a radical movement like the North American Man Boy Love Association could "copy the playbook" for redefining marriage. Zimmerman also claimed that SCOTUS' decision doesn't do away with "opposite-sex marriage discrimination," because consenting adults can't marry if they're brother and sister. Just in case that wasn't enough to rile everyone up, he later compared Dred Scott to Roe v. Wade, saying that it's the Supreme Court saying "if you're an unborn child, you don't have any human rights." The conversation with Cargill was marked by Cargill's seeming desire to paint Zimmerman as not against gay marriage (Zimmerman would later tell KEYE gay marriage "is an oxymoron" and "does not exist") – Cargill himself is gay, but he also considers Zimmerman a friend. After Zimmerman got off the phone with Cargill, Cargill launched into a defense of marriage equality, saying "This is common sense to me ... we don't have a national religion," and pointing out that "Biblical marriage" includes some pretty horrifying unions that we wouldn't endorse today. – Nina Hernandez and Amy Kamp

• Dais Decamps: City Council’s final meeting (Thursday, June 25) before its annual summer break was not onerous, as it completed the unfinished business from the previous two sessions (June 23 & 18). The agenda was cleared, with only a couple of surprises and a couple of items postponed until August.

• Somewhat surprisingly chose Navigant Consulting to perform the independent review of Austin Energy’s Resource, Generation, and Climate Protection Plan, although the firm was graded slightly lower on the city staff’s “scoring matrix” of the three companies under consideration. Oddly, an earlier motion by Austin Energy Oversight committee of the whole – that is, Council members meeting as a AE oversight committee – to recommend the same choice, failed. Mayor Steve Adler argued that Navigant has the closest local ties, and though the AE administration had said any of the three companies under consideration could do the job, after some hesitation, Council decided to go with Navigant. It will review the utility’s overall energy plans, and specifically the potential need for a new natural gas plant recommended by AE staff.

• Restructured, but did not set the terms of, the new “drainage fee” system that will replace the current Watershed Department charge that was thrown out in court. The new version will be based on the customer’s contribution to “impervious cover” – the purpose of the fee – meaning apartment/condo residents will pay less, single-family homeowners presumably more, although it may be phased in to soften the blow. The precise fees will be determined during August budget discussions.

• Postponed action on the approval of Fun Fun Fun Fest to return to Auditorium Shores, pending continuing negotiations between the city and the festival over how to accommodate the festival within the revised design of the Park, including the leashed and unleashed dog park areas. With no resolution yet, Council postponed the approval until August, when presumably some progress will have been made.

• Finally approved the negotiation and execution of an amendment to the ongoing agreement with the West Austin Youth Association for the continuing use of the Lamar Street beach area.

• Approved the creation of an online database for campaign finance information in municipal elections, which should theoretically make it easier to accuse candidates of being in the pockets of City Hall lobbyists and lawyers – aka the people most likely to contribute to the whopping $350 limit in city campaigns.

With that, Council recesses from regular meetings until July 30, when budget discussions resume. – Michael King