News Roundup: All Sorts of Disasters

Pressley vs. Casar, Linklater vs. fire, and more 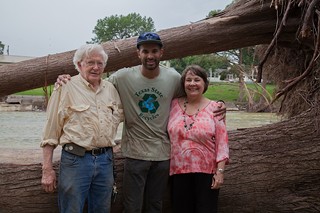 Chronicle Marketing Manager Dallen Terrell (c), with his grandparents, whose Wimberley home was severely damaged by the flood (Photo by Kat Goins)

In this week's News Roundup, flood relief efforts are far from complete, a judge rules that Richard Linklater's insurance company does not have to pay for his burned archives, City Council defends its assessment of Austin's commercial property values, and a defeated Council candidate might lose again in court.

• As the Chronicle was reminded this weekend during a volunteer trip to Wimberley, work to salvage and rebuild property destroyed by the recent floods is far from completion. There is demolition and construction work to be done, as well as plenty of clean up. Look for information about how to help in this week's issue, and in the meantime visit "Flood of Relief," a regularly updated list of resources. – Amy Kamp

• Pressley Fiasco Continues: Testimony is expected to conclude sometime this week in the sanctions hearing concerning the elections contest by defeated City Council candidate Laura Pressley against District 4 Council Member Greg Casar. Judge Dan Mills has previously dismissed Pressley’s contest as showing “no evidence” of actual wrongdoing or mistakes in her 65-35% defeat in the Dec. 12 run-off for the inaugural District 4 Council race. Pressley is appealing that ruling to the Third Court of Appeals, but the current hearing is to determine whether Pressley is liable for Casar’s legal and court costs, and possible penalties, for her ongoing legal action (called “frivolous” by the defense) that has accrued many thousands of attorney costs for both sides. Casar’s existing legal expenses (he’s represented by Charles Herring and Kurt Kuhn) were recently estimated at $150,000, and Pressley was uncertain how much she’s now spent (or owes) but it’s presumed to be in the same order of magnitude. Pressley was initially represented by David Rogers, but testimony Thursday reflected that their relationship has ended – for unspecified reasons – and Rogers has settled with his client for a fraction of his expenses, although she’s continuing to raise funds to pursue her legal actions (aka her permanent campaign), now represented by Mark Cohen. The attorney totals do not included ongoing costs to the Travis County Clerk’s Office, which initially performed the confirming recount (that Pressley also rejects) or ongoing expenses for discovery and testimony, or costs of the Travis County Attorney’s Office, which is defending the county’s election process.

Visiting Judge Mills is trying to procure an available courtroom to conclude the hearing this week. He could issue a ruling from the bench – and depending on the ruling and the timing, that could affect the timing for any subsequent appeal. The hearing was nearing a conclusion late Thursday afternoon when it was interrupted by courthouse fire alarms – thus far, no one has suggested that the evacuation might have been a “false flag” operation designed to undermine Pressley’s appeal, but equally dubious notions have already been alleged in this case. – Michael King

• Challenge/No Challenge/Challenge: There will apparently be a non-hearing hearing this morning (June 22) before the Appraisal Review Board at the Travis Central Appraisal District, as Mayor Steve Adler announced at Thursday’s City Council meeting that the city has changed its strategy in its challenge to TCAD’s commercial valuations. Since the challenge – successful or not – threatened to delay the TCAD certification of Travis County tax rolls, and therefore the annual budget preparation of the city and more than 100 other county taxing jurisdictions, the parties have jointly decided to ask the ARB to approve an agreed order to “disallow the challenge,” enable certification to proceed, and then take the challenge to district court after certification. The time frame on the subsequent challenge is unclear, but presumably the FY2016 city budget would be based upon the tax roll about to be certified, and any subsequent resolution would happen long after the budget is adopted in early September. Adler said the court would ultimately determine the effect and timing of any potential changes in the valuations. The city has produced research reflecting that commercial properties are substantially undervalued, but TCAD has responded that based on its review, the valuations appear to be within legal standards. “The parties are working cooperatively,” said the mayor, “to ensure both that the challenge can be prosecuted and heard and evaluated and decided, and that the appraisal roll will be validated with the 2015 values, in a timely way for all of the taxing entities.” You can read more about the appraisal dispute here and here. – M. K.

• Director Richard Linklater has lost his latest appeal of a denial of insurance payment for the loss of his filmmaking archive in the 2011 Bastrop fires. Linklater originally filed suit against Farmers Insurance Group subsidiary Truck Insurance Exchange after they refused to pay out for the loss, valued at $500,000 (see "Linklater Sues for Bastrop losses," May 17, 2013). They argued that, since the building the material was stored in was not listed on his insurance document, it was not covered: Linklater's attorneys countered that the policy was ambiguously worded. However, Judge Stephen Yelenosky ruled in favor of the insurer (see "Linklater Loses Insurance Lawsuit," May 23, 2013). Linklater appealed that decision to the Third Court of Appeals, but in a June 18 ruling, all three judges ruled in favor of TIE. The archive contained 130 to 140 large boxes of original and irreplaceable production material, props, and costumes, some dating back to Linklater's landmark directorial debut Slacker. – Richard Whittaker