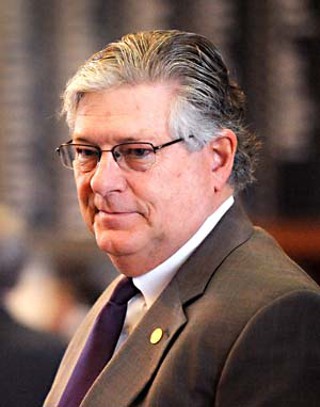 Now that the regular session of the 84th Legislature is over, primary season is upon us. As of this morning, Travis County has its first intraparty struggle, as former District 6 Austin City Council candidate Jay Wiley will challenge three-term incumbent state Rep. Paul Workman.

Just this week, Workman had confirmed that he will seek re-election. That took him out of contention for the newly vacated seat of Sen. Troy Fraser, R-Horseshoe Bay, whose heavily gerrymandered district covers Workman's seat (see "Lege Races Take Shape," June 19) for more on Fraser and other retiring lawmakers), even though he admitted that he had considered the post. If he expected that would mean avoiding a contentious primary, he was mistaken: He now must defend his incumbency against former Travis County Republican Party Elections Coordinator Wiley.

Quick word to the wise for Wiley: You come at the king, you best not miss. While Workman has often seemed like furniture in the House, he's a beast on the campaign trail. In his initial run in 2010, the former Real Estate Council of Austin board member slammed primary opponent Holly White Turner with the tag of carpetbagger, before a heavy-handed attack on Democratic incumbent Valinda Bolton. He even accused her of being soft on violent sex offenders, a particularly brutal charge against a woman who has spent years working with and for victims services charities.

However, it worked. Two years later, he was able to see off a primary challenge from Ryan Downton, part of the map drawing team behind the last gerrymandered redrawing of the Texas legislative map. Downton based his attack on the simple idea that Workman had pushed the process hard to ensure that his was a securely GOP seat, sucking up every red precinct in the South-West corner of the county and making it basically impossible for the Republicans to take any other local House seat.

That turned out to be too esoteric for voters, and so Wiley's morning fundraising missive announcing his intentions aims for easier targets. The Legislature is too submissive to special interests, he argues, and failed to move on issues like illegal immigration and abortion restrictions. He wrote, "We are witnessing a failure of leadership in prioritizing conservative reforms that the grassroots are calling for."

It seems he'll be running on his Tea Party credentials, and the old mantra of "throw the bums out." Yet since he only came third in a six-horse council race, losing the GOP vote to the more idiosyncratic Don Zimmerman even after receiving block-walking assistance from then-candidate Greg Abbott, Wiley has a long campaign ahead of him.

The question now is whether the Democrats would bother fielding a challenger in next November's elections. They didn't bother in 2014, after Workman blew out Chris Frandsen by a clear 21 points in 2012, but with a presidential race in the offing, and a divisive GOP primary revealing potential fault lines, that could potentially draw a name.