In an unusual moment over the weekend, Austin City Manager Marc Ott finally had his fill of scurrilous criticism. After a couple of tax-obsessed bloggers first implied that city budget policies are deceptive, then one directly denounced Ott as a “liar” – he had enough. 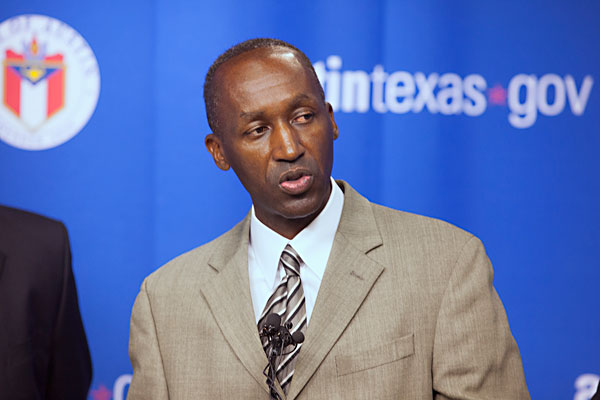 The dustup started at Bill Oakey’s “Austin Affordability” blog, where on June 12 Oakey reported that he had discovered – through budget development documents readily available on the city’s web site – that a heretofore unidentified $26.9 million “surplus” in city funds (either not spent in the previous budget cycle or accumulating in unanticipated revenues) was available for allocation. In Oakey’s blinkered “affordability” compulsions, that meant the money should immediately be put to use to amplify the just enacted 6% homestead exemption on property taxes. Since by now the “20% homestead exemption” – currently estimated to cost somewhere between $32 million and $36 million – has become doctrinal among local tax-cutters, Oakey figured he had found the pot of gold that would rain down on Austin homeowners.

Since Oakey has the receptive ears of some credulous City Council members, within hours the city's Deputy Chief Financial Officer Ed Van Eenoo found himself explaining that the funds Oakey described are in fact the accrual of conservative budgeting, dedicated to the city’s reserve funds, and by longstanding policy (and good fiscal management) can only be used for one-time (and generally unanticipated) expenses, and can’t be allocated to a recurring deduction like the homestead exemption. Oakey has spent the next couple of days attempting to explain away Van Eenoo’s explanation. Oakey has acknowledged that he was wrong about the exemption but otherwise dismisses Van Eenoo's distinctions about reserve funds as simply semantics. (If you're eager to be further confused, you can attempt to parse Oakey’s persiflage here.)

Confusion is one thing; defamation is quite another. Mary Rudig of the “lovenorthaustin” blog, a semi-neighborhood, semi-political effusion devoted to far north areas, picked up Oakey’s revelations, juxtaposed them with an unrelated presentation by public safety administrators to the Public Safety Commission – of potential service cuts if prospective budget development goes in that direction (an exercise mandated by Council in February) – and roundly denounced Ott as a “liar.” In a post headlined, “Public Watchdog Austin Affordability ﻿Proves City Manager is Lying,” Rudig praised Oakey and denounced Ott’s “proposed budget cuts,” and urged her readers “to contact City Council and say enough is enough. No City Manager should be proposing these kind of public safety cuts after the 2011 fires and the Onion Creek and Memorial Day floods, especially when it has already come out that he is lying, lying to the public and to the Public Safety Commission.”

It’s not clear how many of Rudig’s benighted readers followed suit, but Van Eenoo and Ott clearly spent some of the last few days doing unnecessary damage control. To repeat: In February City Council directed the city manager to find potential service cuts (or revenue enhancements) to pay for a potential 20% homestead exemption, and to report back by May 15 (delivered to Council May 13). On June 1, the next available PSC meeting, public safety administrators presented those findings to the Public Safety commissioners to keep them in the loop. Last week, Oakey purported to find $26.9 million in “surplus” funds that are in fact reserve funds (i.e., a city savings account), and the following day acknowledged his mistake. Nevertheless, Rudig decided, based on Oakey’s mistaken report, that Ott was directing a stealth staff plot against public safety funds, and denounced the city manager as a liar.

Marc Ott’s painfully polite but effectively blistering response, posted as a comment to Rudig’s blog Friday and then eventually as an independent post, follows here:

Mary – I have to say that I’m surprised, disappointed and more than a little offended at the recent message sent to your membership. While public debate among budget priorities is healthy and fundamental to our democracy, to question my commitment as a public servant and to declare outright that I’m a liar is something I simply can’t ignore. In fact, it flies in the face of the 35-year commitment I have made to serve the public. To make such a public declaration about anyone, regardless of the circumstance, requires knowledge of a person and that person’s character that you and I do not share.

Perhaps an orientation to our budget process is in order, and I would hope that you share this with your networks.

First, we are very early in the budget process. My responsibility and the responsibility of our budget staff is to provide an accurate forecast of revenues and expenditures, as well as projected scenarios based on the feedback we’ve received from Council. This year, that has included a variety of scenarios from a 20% homestead reduction to a tax freeze for seniors and the disabled. We develop conservative estimates and convey to the Council – and to the community – what service impacts may result from implementing those scenarios. This is not the first time that we’ve asked departments to provide potential service reductions as a means of developing a sound and responsible budget proposal.

At this stage in the process, it’s a conversation and not a proposal. There is no budget proposal, nor are there proposed cuts. There are options for discussion, and opening that discussion to the Public Safety Commission – and to the public in general – is the right and appropriate thing to do. It’s the same process that’s happening with all of our departments and their respective boards and commissions. We’ll then take all of that feedback, along with suggestions from Council and our most recent estimates to provide our proposed budget in August.

Second, your sources seem to be intentionally obscuring financial facts to convey a story that simply doesn’t exist. Our financial forecasts are based on actual projected revenues and expenditures and not on other sources (like the Budget Stabilization Reserve) that are only allocated to one-time expenses and not ongoing operational expenses. To use reserves as a means of funding known, ongoing expenses would be akin to an individual using long-term savings to pay their monthly mortgage.

I think it’s also worth noting that the documentation you reference is part of a publicly-available resource of Council budget questions and answers – a resource created after my arrival to improve transparency in the budget process. So the suggestion that anyone here at the City would be hiding information is patently false.

Mary, as a respected community leader, I would expect some measure of fact-checking prior to drawing the conclusions you seem to have drawn. I would also expect the courtesy of reaching out before making such public and defamatory assertions about my conduct as a public servant.

Needless to say, Rudig did not attempt to contact Ott before she began defaming him, although she finally did manage to thank him for “reaching out” to her readers. Over the weekend, I emailed her about her absurd charges against Ott – she simply repeated them in more detail (adding the accusation that the PSC presentation was timed to coincide with the Memorial Day floods, although it was scheduled before the flood was even anticipated), and has made no effort to retract or apologize for her inaccurate and illogical accusations.

Since his appointment in 2008, plenty of people (including in the Chronicle) have sharply criticized Ott for various failings, several current Council members expressly campaigned against him and other city staff, and as a rule city managers – like their baseball counterparts – have limited tenures in jobs that inevitably accumulate public criticism over time. Ott undoubtedly has his shortcomings. But he has also provided this city honest and good service and leadership, often in times of crisis, for many years – especially in the area of financial transparency, in good times and bad – and he doesn’t deserve this malicious, absurd, bullshit character assassination masquerading as civic activism. Nor should elected public officials be treating this scurrilous nonsense as though it represents serious public sentiment.